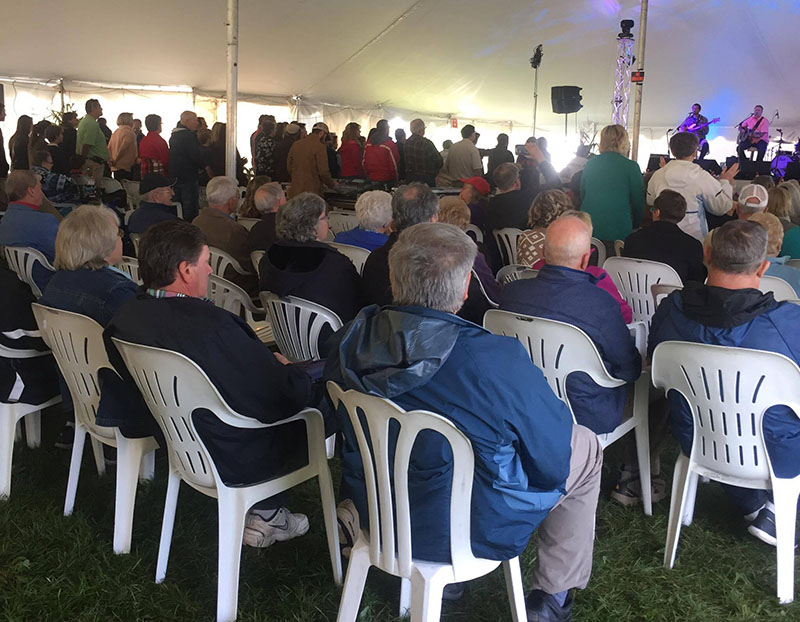 On September 8 to 10, Mike Haughton, along with a number of local church leaders, put on the second-ever Crossroads Rodeo Ministries Fall Round Up at the Vankleek Hill Fairgrounds. (Photo Courtesy of Sherry Haughton)

Sixty-four-year-old Mike Haughton stands under a tent at the Vankleek Hill fairgrounds, pacing the stage and speaking to a group of eager listeners arranged in multiple rows before him.

Making the trip all the way from Arkansas, he occupies a position normally reserved for music stars and motivational speakers. But Haughton isn’t looking for fame, or fortune, or even special attention towards himself. All he wants is to lift some spirits with a message of love and kindness for the residents of a town that holds a special place in his heart—the town where he himself, grew up.

“Vankleek Hill will always be my home. You don’t need to live in a place to know that’s where your heart is,” Haughton says.

This past September, with the help of a number of local pastors and church figures, Haughton put on his second-ever Crossroads Rodeo Ministries Fall Round Up bible-study event in Vankleek Hill. People from churches and parishes across the local area came to the fairgrounds to join in the day’s celebrations. Many of them put up posters, helped set up tables and chairs, and made desserts to help make the event a reality.

The event was the first since the first-ever Round Up in 2008, when Mike says God called him to return to his hometown to spread some goodwill for the people in the area.

“I wanted to come here to refresh the people. Let them know that there’s people who are thinking about them—people who love them.”

In his day job, Mike Haughton works as a heavy equipment appraiser. The occupation has provided him a dependable living and has allowed him to travel all over the world over the course of his career.

However, it’s ministry work that he says provides him with his true purpose.

“It’s all about spreading as much of His good word as we can. It’s an amazing feeling when you get to see prayers being answered.”

Mike and his wife, Sherry, have been holding bible studies for more than 20 years now. Mike says it all started one Thanksgiving Monday when he says he felt the lord moving him to start his own study. It just so happens he was already in the process of building a shed on his land, so he decided to make it the building which would come to house his study.

Unfortunately, during those times, money was tight, Mike says. Which meant that while he was able to build the shell of the building, he was unable to wire it—that is, until he received a call from a man inquiring about the newly-developed shed. The man had heard about what Mike had been planning to start and, after some conversing between the two, the man offered to do the wiring himself—free of charge.

The Haughtons have often taught as part of “cowboy church”, an informal, “come as you are” church service held alongside the rodeo events near their home in Arkansas. All are welcome at the service.

As Mike explains, it’s the meaning of the activity that matters, not what you wear or what specific tradition you come from.

“It doesn’t matter to me the denomination of the people who attend. When we get to heaven, there will be no denominations.”

During these events, the Haughtons join up with others looking to take part in the study and spend the day convening together ahead of the rodeo activities that take place in the evenings.

Though age now prevents Mike from taking part in the rodeos with the regularity he used to, he and Sherry still find other ways to lend their aid to those in need.

As part of the ministry, the couple often find themselves called to help those in distress, whether in the aftermath of natural disasters or through camps helping to cook for youth groups, or just when people require a helping hand. Mike says seeing the people’s responses to their help is one of the best feelings you can have.

“Seeing the reactions when you show up to help is just beyond it all. I just love helping people.”

As for whether he thinks he’ll be called to make another visit to Vankleek Hill in the years to come, Mike says it all depends on what “the man in charge” wants from him.