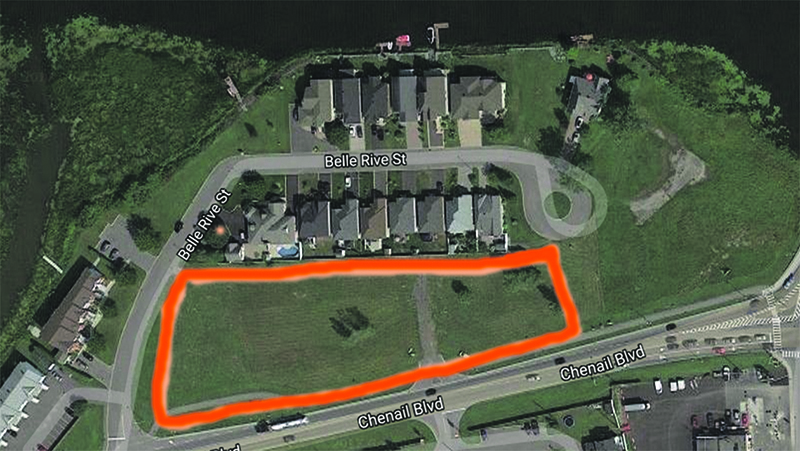 Gestion Vitrico Ltee, a company owned by Gilles Gauthier, owns a vacant property, which is now an open field with a few trees, which is located right behind the Belle-Rive development, just south of Main Street, where more than  20 residences are located.

According to a report from Lloyd Phillips & Associates, an urban planning firm hired by Gestion Vitrico, the land was rezoned in 2012 from a high-density residential zone to its current commercial zoning. Gestion Vitrico wants to build a restaurant/retail store, a carwash and a convenience store with a drive-through. This conceptual site plan presented to the town would take up most of the 1.92-acre lot.

As of now, the current zoning permits the construction of all the intended buildings except the gas bar. Gilles Gauthier is asking the town to change the zoning of the lot in order to be able to install gas pumps once he completes the purchase of the land from the Town.

At the October 16 council meeting, both Gilles Gauthier and residents of Belle-Rive were present to hear the verdict from council about the zoning change. People were visibly disappointed that Council had to push the decision to the next council meeting, to be held on October 30. The reason for pushing the decision is that council members did not have the time to review both the Lloyd Phillips & Associates planning report and the town planner report in order to make an informed decision.

Council will be making its decision to allow or not allow the zoning change.

Hiring of a CAO

The town of Hawkesbury has been without a CAO since 2014. The town is currently managed by various committees comprised of employees and council members. On October 30, Councillor Michel Thibodeau will propose to hire a CAO to manage the municipality.

He did not want to comment as to why he would propose to hire a new CAO, stating that the debate between council members will be held on October 30 and that council members themselves do not know, as of now, why he is making this proposition.

The council meeting on October 30 will be a televised meeting.