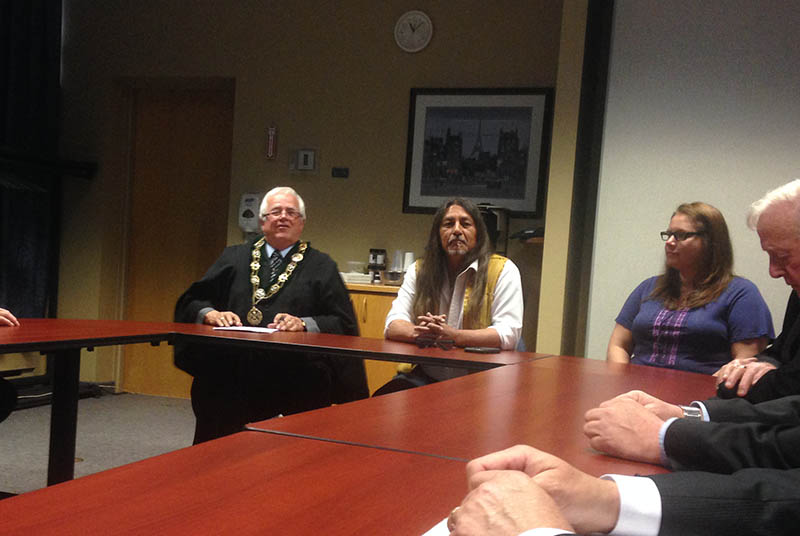 A decision regarding Colacem Canada’s proposed cement plant may be delayed, after Kanesatake Grand Chief Serge Simon and Chief Patricia Meilleur met with the council of the United Counties of Prescott and Russell.

Simon said he wanted more information about Colacem’s proposal, as well as a meeting or meetings on the subject after June 14.

He expressed concern about the possible environmental effects of the plant and said that council should look at alternative ways to grow the economy. There should be a “fight for a different kind of economy,” he said. “There are other ways of creating wealth.”

Simon suggested looking at attracting other kinds of industries, instead of a cement plant. He said Kanesatake is working with companies in the green energy sector, for example. “These companies are more than willing to come and see each and every one of you,” he said. He offered to share the names of some of those companies at a later meeting.

He said one of his main concerns was about the water in the Ottawa River. “Around the world we look at countries that are not as wealthy as us. When they see us, what we’re doing to our waterways, they’re calling us insane,” he said.

Simon said Colacem’s proposed cement plant has divided the community in Prescott and Russell. “Why don’t you look at projects that will unify your community, instead of dividing it,” he said. “A unified citizenship…that’s valuable, you can’t deny it.”

Warden Gary Barton said the United Counties would share all the information about the cement plant proposal with the Kanesatake council, and set up another meeting to discuss the plant after June 14.

The Mohawk council of Kanesatake originally requested a meeting with a letter in March which expressed concern about the project: Kanesatake “is situated downriver from where the runoffs of Colacem Canada Inc. will collect and settle in parts of the river which is used for fishing and hunting by our members. This project will definitely impact us in every way, also seeing as our neighbors use it (river water) as their main water source,” it said.

About 20 members of the public, as well as Colacem Plant Manager Marc Bataille, attended the meeting, which happened during council’s regular meeting of May 24 in L’Orignal. The United Counties council must eventually vote on an official plan amendment requested by Colacem, which is required for the project to go forward. Last week, local mayors attended a public meeting as part of the official plan amendment request, and heard arguments from Colacem, opposition group Action Champlain, and members of the public about the plant proposed for Highway 17 outside L’Orignal.