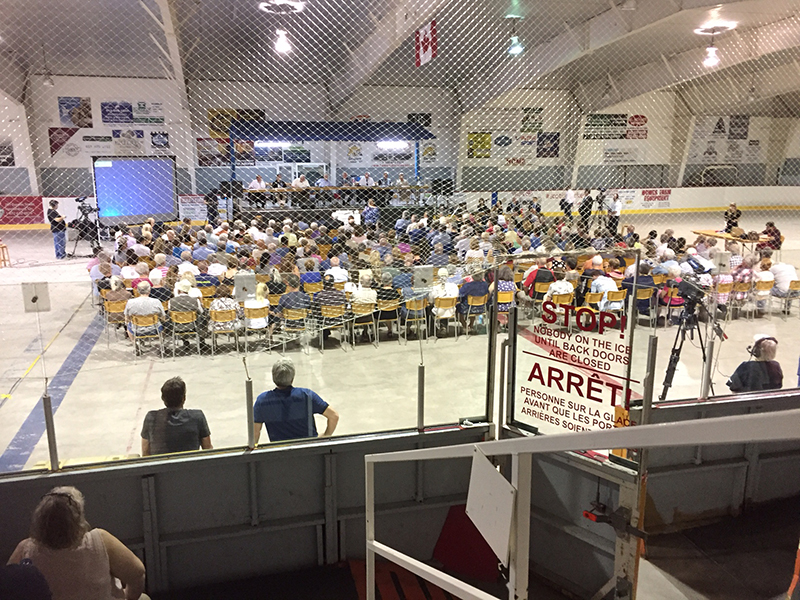 About 400 people attended a public meeting regarding an official plan amendment requested by Colacem Canada on Thursday, May 18. Prescott Russell mayors gathered at the Vankleek Hill arena to hear comments on the proposed amendment, which the company needs in order to go ahead with their project of building a cement plant on Highway 17 outside L’Orignal.

Action Champlain, which opposes Colacem’s project, has hired a lawyer, Ronald Caza, who spoke at the meeting and argued any benefit from the cement plant might disappear in the near future, as more jobs are replaced by machines. “When you replace the people who work with machines, you lose the only advantage you have from having this project in the United Counties of Prescott and Russell,” he said.

The group also had a planner, George McKibbon, argue against the official plan amendment requested by Colacem. The planning report prepared by United Counties staff and studies provided by Colacem provide “insufficient information” for the amendment, he said. He said while an EOHU study did not establish a link between living near a cement plant and a higher risk of cancer, studies “have not established that proximity does not have a causal relationship.”

McKibbon argued while Colacem’s study show air quality and dust levels will be within ministry standards, air contaminants being released from Colacem’s quarry and from vehicles on County Road 17 are not included in the study. “There’s a reasonable probability that those will exceed the ministry standards,” said McKibbon. “The air and dust analysis do not include the cumulative impacts associated with the air that people who live in the residences around the colacem cement plant will breath.”

McKibbon also raised concerns about the noise and vibrations that would be caused by the plant, as well as the visual impact on the surrounding area. He called the proposed project “profoundly sizable” and said that would have an effect on the surrounding area. “It’s very flat area. It can be seen from a substantial distance, and no attempt has been made to quantify that impact or address it,” he said.

Colacem Canada has said it will hold meetings for residents “on theme-based topics that matter to the community,” and will also create a “Community Liason Committee with a mandate to work with the community and promote dialogue.”

On Thursday, plant manager Marc Bataille said it is difficult to make a decision without completely understanding the issues, and Colacem sees the meetings and the liaison committee as ways of improving communications with the public. “It seems that there is a need for clarification,” he said.

The company says the benefits of the project will include an initial investment of $225 million and 300 long-term jobs. It also says its plant would be state-of-the-art, and use 40 per cent less fuel than some of its competitors. “After its construction, the cement plant will have one of the lowest environmental impact of all operating cement plants in North America,” said an open letter from the company. 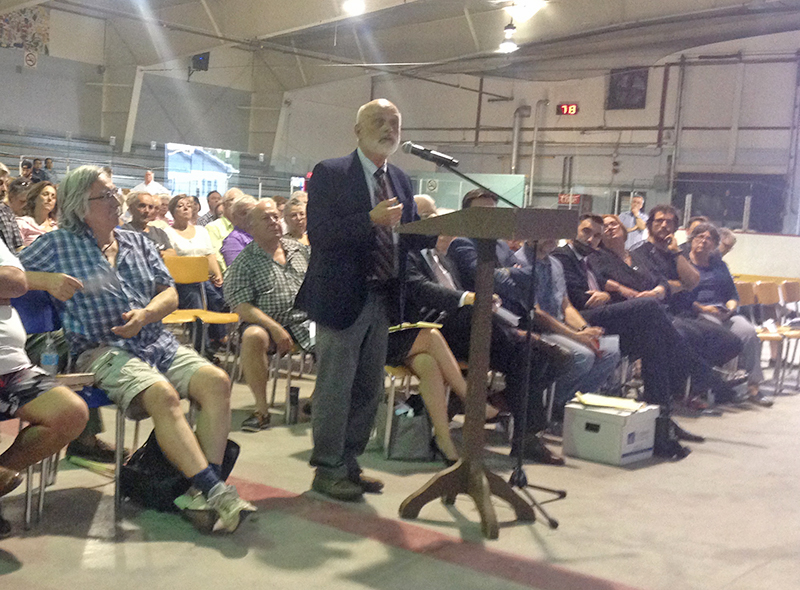 George McKibbon, a planner who argued against Colacem’s proposed amendment on behalf of Action Champlain.

After Colacem and Action Champlain gave presentations, members of the public had the opportunity to comment. Most of those who spoke were opposed to the project, and raised concerns about the environment and health.

Thomas Maxwell, a doctor from Hawkesbury, argued the cement plant would cause a risk to health. “Eastern Ontario has been targeted as the largest area in Ontario for chronic pulmonary diseases,” he said. He said even small amounts of emissions could create risks. “There are the trace or the intangibles that we do not see in the studies at all. Just because they’re not measured does not mean they do not exist. They have a significant impact on health.”

Daniel Cloutier said a review done by the EOHU was “extremely narrow in scope.” While the emissions from the plant may within provincial guidelines, he said, “unfortunately this does not mean it will not have an effect on the environment and health.”

The meeting ended after about two and a half hours. Mayor Gary Barton thanked Colacem, Action Champlain, and the public for their comments. “I’m sure the mayors will have a lot to think about,” he said.