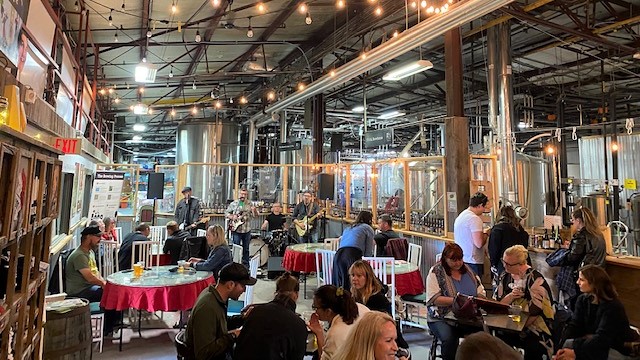 Beau’s Brewery is celebrating the planned facelift of its Taproom with a three-day party from January 27 to 29. Photo: Beau’s Facebook Page

Beau’s Brewery is celebrating a facelift for the Taproom at its Vankleek Hill location, with a three-day party featuring live music, from January 27 through Sunday, January 29.

The Beau’s Taproom will be getting a facelift this spring, beginning with some roof repairs and flooring work in February. The nature of this work will require the Taproom to close to the public for three to four weeks, beginning Monday, January 30. On deck once the repairs are complete are a taproom expansion and redesign project for the spring.

Beau’s General Manager Josh Gottlieb says the effort will pay off with a more versatile and enjoyable visitor experience.

“We’ve hired a local consultant to help us with things like lighting, furniture, and décor – we don’t want to change the things that people love; we just want to make the space more comfortable and welcoming in all four seasons,” Gottlieb said.

When complete, the renovations will double the footprint of the indoor area open to the public.

“We’re very excited to begin booking private parties and weddings into our larger space, as early as this summer,” Gottlieb enthused.

Three-day party from January 27 to 29

The Beau’s team will be taking advantage of the few weeks’ downtime to refresh the food menu with some local and seasonally inspired offerings. Growlers, which are the 1.89L brown glass jugs early fans of the brewery would remember, will be making a return to the beer to-go menu. A new line up of small-batch releases, slated to be a mix of fan favourites and new recipes, will launch as well.

Beau’s is throwing a party the weekend of Friday, January 27, to allow folks to come stock up on their favourite brews, as well as enjoy some live music and good times before the renovations begin. A Robbie Burns themed night is Friday (featuring live music by Hadrian’s Wall), and Saturday will offer food and drink specials, live music, and a small-batch Vanilla Porter brewed for the occasion. Beau’s will stay open till 8 p.m. both Friday and Saturday, with regular hours and live music Sunday, January 29, from 10 a.m. to 6 p.m.

There will still be options to buy beer while the Taproom is closed. Beau’s customers can pre-order beer online at shop.beaus.ca for curbside pick-up in the brewery parking lot, from Monday through Friday, from 2 p.m. to 5 p.m.

The Dunrobin Distilleries store will also be open for shopping during those hours. Home delivery from shop.beaus.ca will also continue to operate during the renovations.

The set timeline is to three to four weeks to complete the renovations. The Taproom will reopen on or before February 24. Beau’s will share an official reopening update as soon as a date is confirmed.