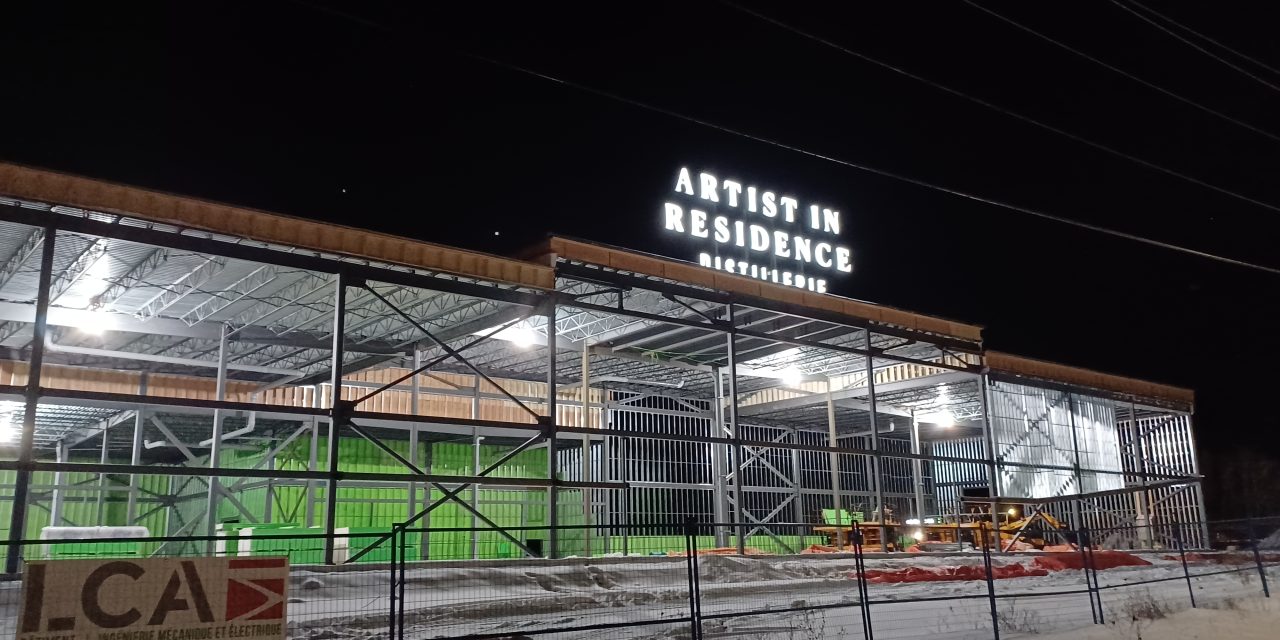 The bright Artist In Residence Distillerie sign on the top of the facility under construction on Tupper Street in Hawkesbury is already lighting up the night. Photo: James Morgan

The owner of a new distillery being built in Hawkesbury is in high spirits about completion of the new facility.

Pierre Mantha, of Artist In Residence (AIR) Distillerie, is hoping the new plant on Tupper Street is making whisky and gin before the end of summer, 2023.

“We should be producing there in August or September at the latest,” he said.

Mantha announced plans to build the distillery on the 15-acre site late in the summer of 2020 and intended to have it open in the spring of 2021. However, slowdowns in planning, obtaining materials, and a construction strike, delayed building into the second half of 2022.

Recently, the steel frame of the building went up and a large white electric sign reading ‘ARTIST IN RESIDENCE DISTILLERIE’ was installed on top of it. The sign is already lit up at night and is even visible from the Long Sault Bridge.

“I want to be proud in Hawkesbury,” Manta remarked. “I want people to drive by and say ‘What does that sign mean?”

Two pot stills are on order from a company in Chicago and are expected to be delivered in June. Each still can produce up to 2,000 barrels of whisky or gin a year. It will be three years before any of the products produced in Hawkesbury will be on LCBO shelves. The company’s owner is also planning to open an on-site store and restaurant at the Hawkesbury distillery.

“We want to make things an experience,” Mantha said.

Expansion in the liquor business is challenging, Mantha said, and part of that challenge will be meeting the LCBO’s rules for having the right to sell in their stores.

“It’s kind of risky,” he acknowledged.

“I believe the future is whisky.”

“I believe the future is whisky,” he commented.

Artist In Residence Distillerie will be emphasizing locally-sourced spring water and grain as ingredients in its Hawkesbury products. Mantha wants a high-end distillery that will produce craft spirits at an affordable price for consumers.

Mantha is estimating there will be just three full-time employees at the Hawkesbury facility during its first year of operation and five to 10 employees during the first three years. However, he is optimistic the site will eventually become a local landmark and destination.

“In 10 years, people will know Hawkesbury because of the distillery,” Mantha said.