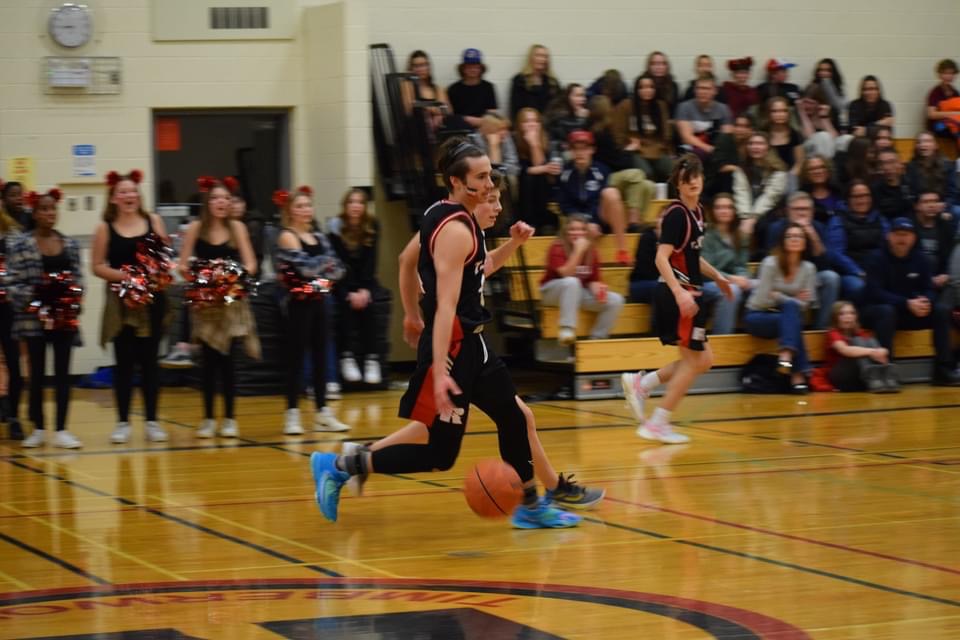 After being cancelled for the past three years, Russell High School (RHS) saw the largest crowd and second most money raised for its annual ‘Baskets For’ event.

The annual after-school fundraiser, held on the evening of December 15, saw the RHS senior boys’ basketball team and alumni basketball team battle their rival teams from St. Thomas Aquinas on the court. Tickets for the event were $5 each, and canteen items and raffle tickets were sold throughout the night.

And for the first time ever, the Russell Spirit Squad, comprised of Grade 7-12 students, took to the court at half time of the basketball game to perform a dance they have been working on since early fall.

“It is always great to see two cross-town rival schools come together for a common goal each year,” said organizing teacher and basketball coach Kimberly MacKinnon.

The collaborative event raised a total of $1,688, which will go towards funding the Russell Splash Pad.

“RHS is always looking for community connections and ways to help build rapport with community members. It is our way to give back to the community each year,” said MacKinnon.

The ‘Baskets For’ event is unique to RHS and was first held in the 2014-2015 school year by MacKinnon, with the support of the Russell High School Athletic Council.

“I came up with the event when I heard about Jonathan Pitre, a.k.a. the Butterfly Child, a student at an Embrun Catholic school who lived in our community and had Epidermolysis Bullosa,” explained MacKinnon. “I knew I just had to do something to help this young man and his family with the cost of his treatments and his wish to see the Northern Lights. Being the basketball coach at Russell High School I knew I wanted to tie in basketball somehow.”

Since then, the annual event has donated to local non-profit organization Kawabunga Group in 2015-2016, raised funds to help build the Russell Sports Dome in 2016-2017, helped support a local student battling brain cancer in 2017-2018, and funds were donated to the Embrun Food Bank in 2018-2019.

“I’m so proud of the efforts made to make this event a success,” said RHS Principal Dominique Bertrand. “Our Russell High School community really has school spirit and generous hearts.”