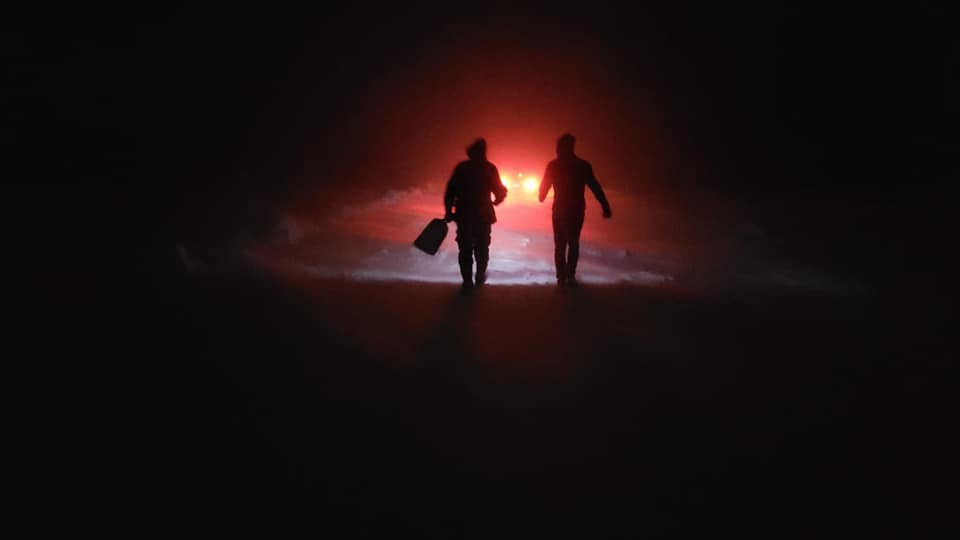 With drifting snow blocking roadways due to a fierce winter storm, Review reader Marco Weibel had a busy Christmas Eve – “I went out several times with the shovel to free cars that got stuck in the drifts on our quiet road on Christmas Eve. Some out-of-town travellers even stayed with us for the night into Christmas, as the conditions were just too dangerous to continue on their ways.” Submitted Photo

The snowstorm that blasted Eastern Ontario and Western Québec just before Christmas was one of the worst in decades in the region.

High winds and more than 40 centimeters of snow over the two days before left road and train travellers stranded throughout the province. Locally, both Highway 417 and County Road 17 were closed to travel on Boxing Day, as high winds made visibility extremely difficult. By Christmas morning, both roadways had been reopened.

As the snow gave way to warm weather and rain, The Review asked readers: Was the recent storm magic …. or a nightmare? Readers were also invited to submit their photos and memories of the storm. See the photo gallery above!

Here are a few of the comments we received.

Jessie Morris – “We stayed home and cancelled a party we were hosting. It was a beautifully quiet Christmas with our toddlers. We had a great time without the stress and fuss of parties here and there!”

Cindy Jodoin – “It was both, actually.”

Pierre Bond – “Wasn’t a nightmare…it’s winter…weather like that is to be expected.”

Lisa Mitchell Brown – “It was a nightmare, aside from cutting short my visit to family near Stratford and driving home trying to beat the storm (last hour was like being in a snow globe). My partner plows the 417, blizzard whiteout conditions, numerous pileups, tractor-trailers in the ditch, roads closed. And we lost power overnight Thursday night until Sunday afternoon. Temps -18C, trying to keep the wood burning, boiling water and cooking on the wood stove to make food for hubby to take on the road, as nothing was open December 24-26 for coffee or food for drivers and he was working around the clock for 5 days while I was home alone. I have numerous pics! And it was also pretty when it was almost over!”

Laura Barton – 4:30 am taxi cab to work – Thank God for tractors! The boss had to come get me for four milkings. Never had this much snow in the shed before either. Luckily the calves were bedded well and managed to stay as cozy as possible. My fiancé also spent all of Christmas Eve clearing and helping cars out of snow drifts on our road and guiding them back to the highway. We also had some out of town guests spend Christmas Eve with us. Felt good to be able to help people out. Perfect winter days in the calm after the storm! Spent lots of time snowshoeing.

Deb Chamberlain – During the storm, we rolled homemade sushi rolls by candle light with our daughter and just talked.