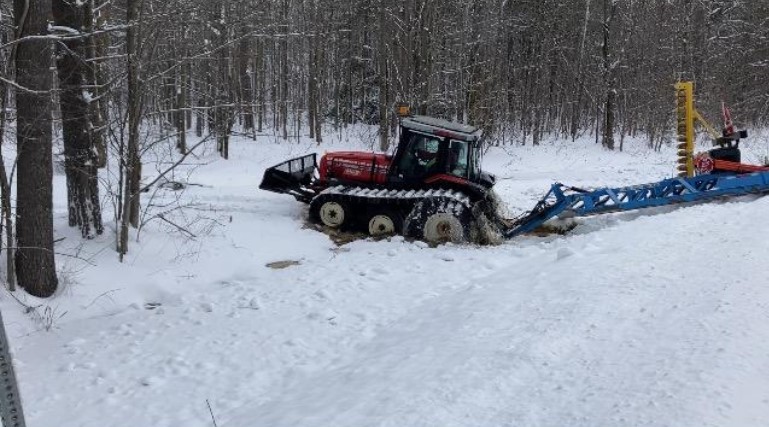 Even the Eastern Ontario Snowmobile Club’s (EOSC) groomer had difficulty accessing local snowmobile trails after the pre-Christmas snowstorms. The EOSC is reminding snowmobilers to stay off of the trails until they are officially accessible. Photo: EOSC

Snowmobilers in the region are being reminded to respect the law, after multiple sleds were spotted on trails in Eastern Ontario over the Christmas holidays – despite the fact the trails were not available.

“They’re doing it illegally,” said Eastern Ontario Snowmobile Club President Chuck Boyer, when contacted by The Review regarding activity on trails maintained by the club.

Snowmobile trails in Eastern Ontario normally become available sometime around mid January, as it takes several weeks of cold weather for the ground to be sufficiently frozen to allow for snowmobile travel. Water crossings, ditches and other obstacles must also be frozen over and properly groomed.

While a heavy snowfall, such as the storm before Christmas, may make the trails look tempting, that doesn’t mean they are ready for snowmobile traffic.

“For trails to be available in this area in the past 10 years, I don’t think it’s ever happened in December,” Boyer says, noting riding over ground that is not properly frozen can damage crops – irritating the landowners who make the trails possible. “That’s how we end up having trails closed.”

While the club may want to make trails available, landowners have the final say. Some may feel the ground is not yet frozen solidly and may wish to keep the portion of the trail that passes across their property unavailable until they feel it is sufficiently frozen. Snowmobile clubs will always respect those wishes.

“The only reason we exist is because landowners give us access to their land,” Boyer observes. “The landowners and the volunteers are what makes (the trails) happen. Without those two pieces, organized snowmobiling would not exist.”

“We won’t have anywhere to ride if we don’t please the landowners.”

The problem is not just a local one. Farmers throughout Ontario have had issues with trespassing by snowmobile operators. The Ontario Federation of Agriculture posts press release advisories each year, reminding operators to respect private property and pointing out the dangers of going off trail.

“Going off the trail and onto farm property causes significant issues for several reasons,” noted an OFA press release in January 2022. “To start, the snow does an excellent job at hiding everything. Crop damage is very possible if riders enter a field of a vulnerable winter wheat crop. Furthermore, it can be extremely dangerous to enter land that may have an unseen catch basin, buried furrow, or stone piles which has the potential to be catastrophic for equipment and riders.”

While in the past, permit holders might have difficulty obtaining trail conditions, it is now easy to find out which trails are available. The Ontario Federation of Snowmobile Clubs (OFSC) provides online interactive maps for all types of devices that show which trails are open on its website here: https://www.ofsc.on.ca/trail-maps/. Trails are marked as Available (green), Limited Availability (yellow) and Unavailable (red).

The EOSC, which maintains snowmobile trails from Embrun to Chute-à-Blondeau, also provides regular updates on its Facebook page https://www.facebook.com/groups/165332160192114/.

Damage to fences and locks

In addition to riders venturing onto the unavailable trails, some landowners have had issues with damages to fences and locks.

“Every winter people illegally cut fences and/or open gates to go through with their snowmobile,” says, André Ouimet, who allows the EOSC to use a portion of his farm property in Vankleek Hill for a portion of the trail.

Ouimet creates a secondary trail each year that runs off the main route and allows students at Vankleek Hill Collegiate Institute (VCI) to access the school grounds by snowmobile. When the trail is not available, the gate is locked with a padlock and large chain. On Thursday, December 29, when he went out to check on the gate, Ouimet discovered the padlock had been cut.

“It’s always been a problem,” said the landowner, of snowmobilers trespassing on his property and damaging fences or crops. “I don’t know how many times we’ve had to fix the fence. Somebody always cuts it somewhere.”

Ouimet and Boyer each say that it is a very small percentage of snowmobilers who break the rules. But both want to remind everyone of the importance of following the rules laid out for usage of the snowmobile trails.

With rain and warm weather forecast for at least the first week of January, it will be some time before trails in Eastern Ontario are available. However there is reason for optimism.

“The rain might actually be a good thing,” Boyer says. “If it reduces the amount of snow and the ground is more exposed (so it can) freeze, it might actually help.”