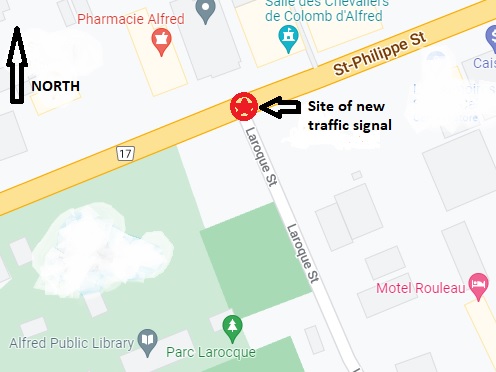 A new pedestrian crossing, controlled by traffic signals, will be installed by the intersection of County Road 17 (St-Philippe Street) and Larocque Street in Alfred. Google Map with additions by James Morgan

A second pedestrian crossing controlled by traffic signals will be installed in Alfred.

On December 7, 2022, United Counties of Prescott and Russell (UCPR) council approved a bylaw to establish a signal-controlled pedestrian crossing at the intersection of County Road 17 (St-Philippe Street) and Larocque Street. A pedestrian crossing controlled by traffic signals already exists in the village, next to the intersection of St-Philippe and St-Paul streets.

In 2021, the Township of Alfred and Plantagenet made a request to the UCPR Public Works Committee for a signalized crossing to be established at the intersection. The UCPR is responsible for County Road 17 and the township is responsible for Larocque Street. The committee discussed the request at a meeting in June 2022 and Director of Public Works Jérémie Bouchard explained there was insufficient need for the crossing, after a camera installed at the site in October 2021 only recorded 12 pedestrian crossings in the area during a 36-hour period.

Larocque Street is used to access Larocque Park and the public library. Bouchard told the committee a further analysis would be done but doubted it would result in enough evidence to warrant the installation of a signalized crossing. However, Clarence-Rockland Mayor Mario Zanth, a member of the committee, expressed concern about pedestrian safety, and the resulting discussion concluded with a recommendation that the signalized pedestrian crossing be installed.

According to Bouchard, funds remained in the 2022 UCPR capital budget for the addition of a second signalized pedestrian crosswalk in Alfred and the township had also allocated funds for its portion of the project. The township and the UCPR will share the cost of installing the new crossing equally.