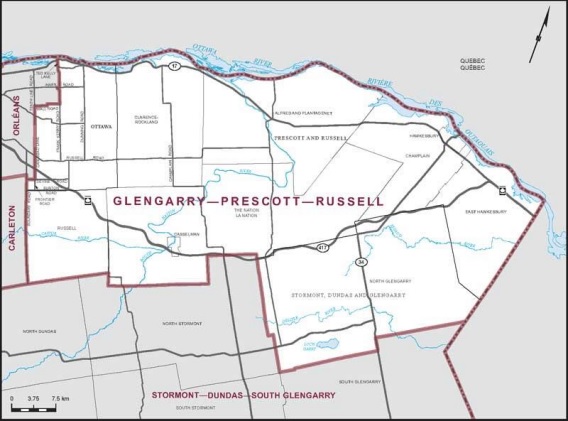 Elections Canada is in the process of redistributing the boundaries of federal ridings, and the Township of North Glengarry is interested in switching districts.

In Ontario, the boundaries of federal ridings are usually adapted to be the same boundaries of provincial ridings. Right now, North Glengarry is part of the riding of Glengarry-Prescott-Russell and is represented in the House of Commons by Member of Parliament (MP) Francis Drouin, and in the Legislative Assembly of Ontario by Member of Provincial Parliament (MPP) Stéphane Sarrazin. However, the township is interested in joining its other municipal neighbours in Stormont, Dundas and Glengarry (SD & G) counties which presently form the riding of Stormont-Dundas-South Glengarry.

Glengarry-Prescott-Russell also includes all of the United Counties of Prescott and Russell and the former municipality of Cumberland within the City of Ottawa.

At the July 11 North Glengarry Council meeting, council approved a resolution to consult with the public regarding the redistribution of North Glengarry from Glengarry-Prescott-Russell to Stormont-Dundas-South Glengarry as part of the federal review of electoral boundaries. The motion to accept the recommendation was moved by Alexandria Ward Councillor Michael Madden seconded by Lochiel Ward Councillor Brenda Noble. According to North Glengarry Chief Administrative Officer Sarah Huskinson, council approved extending the consultation period on July 25. The results of the consultation will be presented to council at one of its meetings in August.

Huskinson said interest in switching ridings came from the township’s Community Development Committee. A report from Director of Community Services Anne Leduc explains changing ridings would better align North Glengarry with its place as a lower-tier municipality within SD & G and with the other municipalities part of SD & G. The report explains there is often confusion for residents of North Glengarry between municipal issues and federal or provincial issues because of the different ridings.

Huskinson emphasized the desire to switch ridings is not for political reasons, and only to better align municipal jurisdictions and responsibilities within SD & G.

“There’s no dissatisfaction with our current MP and MPP, that’s for sure,” she said.

North Glengarry residents are encouraged to participate in the electoral boundary consultation process by reviewing the information and contacting the township using the instructions found at https://www.northglengarry.ca/en/community-info/redistribution-of-electoral-district.aspx and completing a short, online survey at https://forms.northglengarry.ca/Economic-Development/Survey-Redistribution-of-Electoral-Districts . 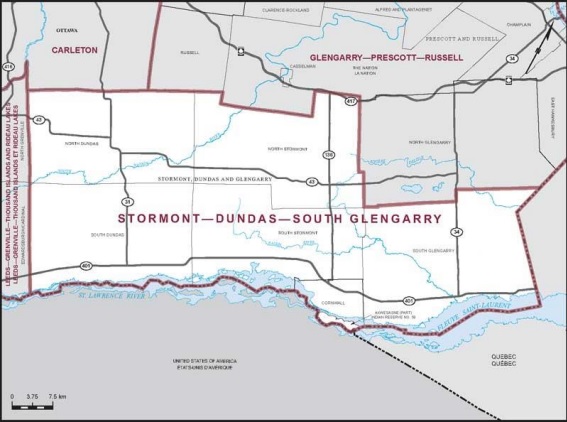