Urban settlement boundary of Vankleek Hill could be enlarged 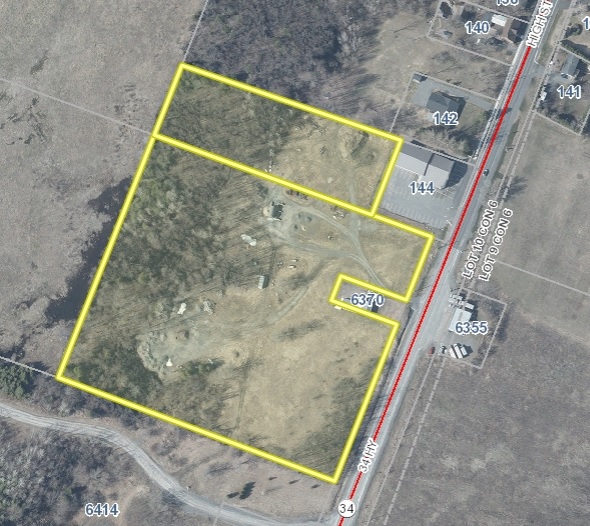 The owners of the property outlined in yellow have requested Champlain Township and the UCPR to enlarge the urban boundary of Vankleek Hill to include the property so it can be more easily developed. UCPR GIS map

Could Vankleek Hill grow bigger in area? Not just yet.

At the February 10 Champlain Township Council meeting, the possibility of enlarging the settlement area boundaries of the township’s largest urban area was discussed.

Associate and Senior Planner Marc Rivet of J.L. Richards said the question is being addressed as part of the United Counties of Prescott and Russell’s (UCPR) review of its Official Plan. Rivet explained settlement boundaries are usually determined based on population and employment growth projections. He said planners are beginning to see more requests from property owners requesting inclusion in settlement area boundaries, but only so far one such request has been received for Vankleek Hill.

Public documents provided at the council meeting indicate the request has been made by Lise Lapensée, Suzanne Audia, and Johanne Lapensée-Crimmins. The land is part of Park Lot R and part of Lot 10, Concession 6 of the Geographic Township of West Hawkesbury. Part of the land is in the urban area, but most is in the rural area.

According to a letter from André P. Barrette of surveying firm Schultz-Barrette to the Planning and Forestry Department of the UCPR, the dual designation is creating challenges for the property owners who want to develop their land. The letter notes that the southern boundary of Vankleek Hill has not changed since 1898.

Rivet said the request was slightly premature, although good arguments in favour of enlarging the urban boundary were given. The arguments in the Barrette letter were that it would allow the expansion of municipal water, wastewater, and street systems to the property, the current Provincial Policy Statement on land use requires sufficient development land be available for up to 25 years, and the present dual designation of the area means development would only be permitted on one side of a future street.

Rivet said other questions needed to be asked before a recommendation may be made to enlarge the urban settlement area. He added that servicing issues need to be further investigated. Rivet said the UCPR Official Plan review process will determine if some areas across the counties will be growing, and then discussions will be held if urban boundary adjustments are required.

Champlain council will have to consider all suggestions for urban boundary changes and then make a recommendation to the UCPR. Rivet recommended waiting until a final report is prepared and other submissions are made to council before making a decision.

“I agree with you on waiting,” said Vankleek Hill Ward Councillor Troy Carkner.

Carkner then asked if it is the township or property owner who is responsible for providing services to new developments. Rivet said the property owner is generally required to demonstrate they can provide the servicing.

“Are we obligated to take services to them if they are brought into the village?” Carkner asked.

“It’s a difficult one to answer,” responded Rivet. He said the obligation depends on the fees by-laws the township has regarding servicing and development.

Mayor Normand Riopel asked if being included in an urban area would be helpful for the lands which are part of the request recently made for the southern part of Vankleek Hill.

Rivet said any justification of the request would have to be at the UCPR level, depending on the use of the land.