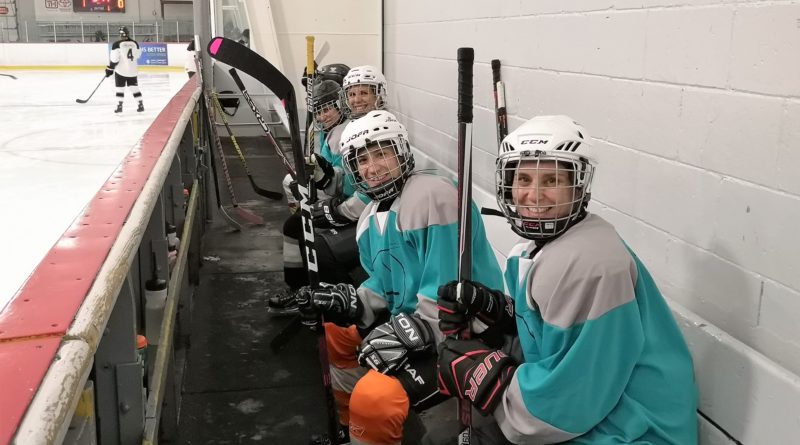 After a September call for more players was answered, the league now has 36 participants; just enough to form a four-team league, after several years of playing pickup games. The players are outfitted in brand new jerseys – provided thanks to the team’s sponsors for the season: Les Jardins Lamoureux; Judith Sauvé Sales Representative; J&D Mechanique; Donovan & Lebeau; and L. Cartman Consulting Inc.

“We’ve had five weeks of play,” says Lee Clement, one of the organizers of the women’s hockey league. “We had a round-robin tournament to make sure all the teams were fair, but all of the games have been fairly close so we haven’t had to make any changes.”

On this night it is clear everyone on the ice is having a great time. There are smiles all around, as the players on the bench cheer on their compatriots on the ice.

Having just nine players per team, including goaltenders, can make for some pretty long shifts on the ice, and the ladies’ league is looking to add more female players as the season progresses. Until then, players are happy to get the extra ice time.

“We’re just borrowing from each other if we need to,” Clement said. “On our Facebook page we have spares, so usually the captains will reach out and people are usually willing to play.”

Women’s hockey is played on Friday nights at the Vankleek Hill Community Centre. Participants range in age from teenagers to players in their 60s and the league is open to players of all calibres.

“We are just trying to get women in sports,” Clement noted. “It doesn’t matter how good they are or if they’re just starting out – it’s open to anybody who wants to play.”

Anyone who would like to play women’s hockey this season is asked to contact Lee Clement at [email protected] or (713)872-3029.