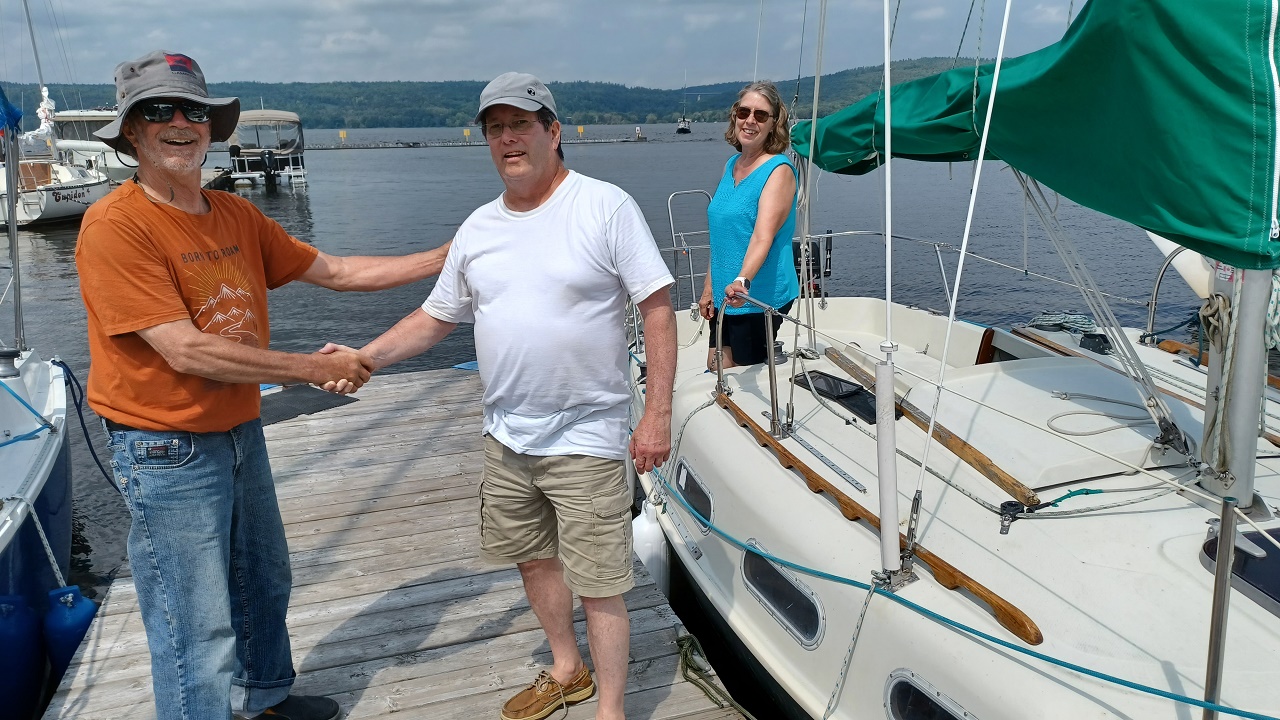 André Berdnikoff, left, congratulates Evergreen captain Kevin Jonasson upon returning to the marina. Susan Thompson is in the background, aboard the boat. Photo: James Morgan

August 7 was a Saturday of sails on the Ottawa River upstream of L’Orignal. The first ever Riverest Regatta took place from the marina.

As of Friday, August 6, 11 sailboats had registered for the regatta, which was a race following a 1,000 square metre triangle in the bay west of L’Orignal. The triangle was marked with inflatable yellow buoys and the boats had to navigate the outline of the triangle, without touching the buoys.

Captains, crew, and passengers gathered at the Riverest Restaurant on Friday evening to go over the rules and logistics. On Saturday morning, a rainshower went through but fortunately ended in time for the vessels to begin leaving the marina. At 11 a.m., the starting horn sounded, and the race was on, two laps around the triangle.

The Riverest Regatta was not a high stakes event this year. While there may have been quiet bets among participants, the competition was all in fun with some friendly chirping between sailors of rival vessels.

For the non-sailor hearing sailing terms can be confusing. There are boom vangs, whisker poles, halyards, spinnakers, and downhauls. Landlubbers would just call these things ropes, pulleys, and big sticks. Cars turn left or right on roads. Sailboats tack.

Evergreen, captained by Kevin Jonasson and crewed by his partner in life and sailing Susan Thompson made its way swiftly around the course and was first over the finish line. Evergreen is a 22-foot sailboat made by Tanzer Industries of Dorion, Québec, in 1982. Jonasson has approximately 40 years of sailing experience. He and Thompson live by the river near L’Orignal and just enjoy day sailing from Evergreen’s home port.

Second place went to Smile, a 26-foot Colgate sailboat, captained by André Berdnikoff. In third place was Berso with Robert Berthiaume at the helm and Sabrina Martinez as his crew. There were no actual prizes awarded, but Jonasson and Thompson did receive certificates of recognition.

A celebratory after party followed outdoors at Riverest restaurant.

“We’re going to repeat this for sure,” said Sylvain Grenier, one of the regatta’s organizers.

“The next time is certain,” he added, hopeful this year’s regatta was the start of a tradition. 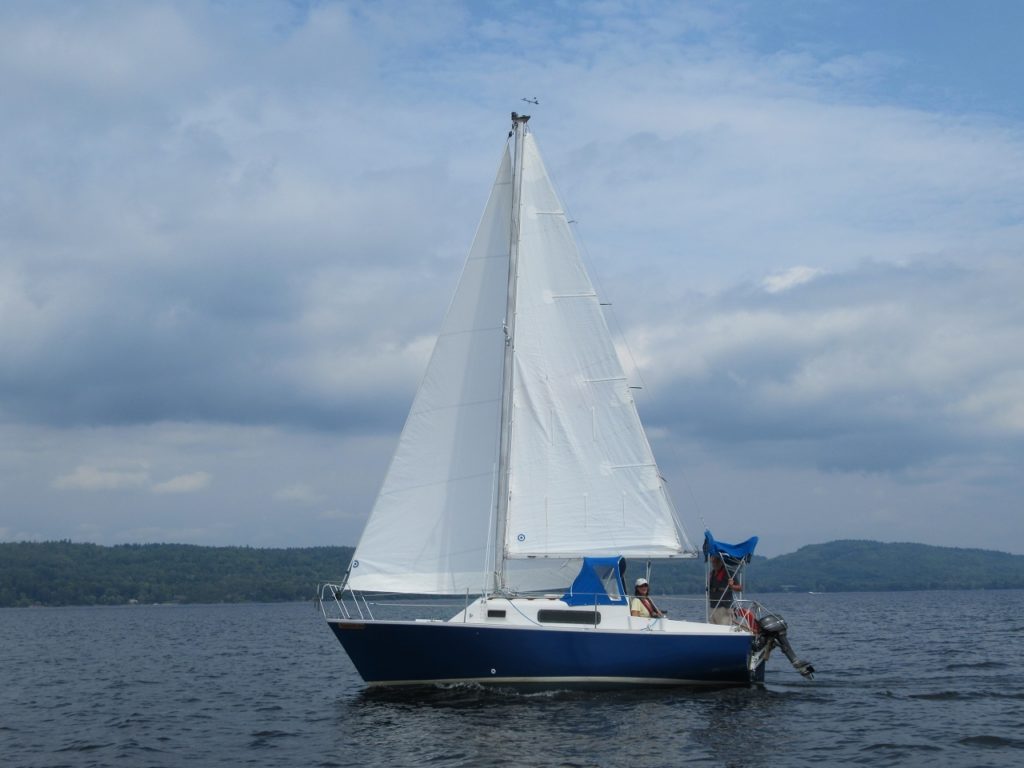 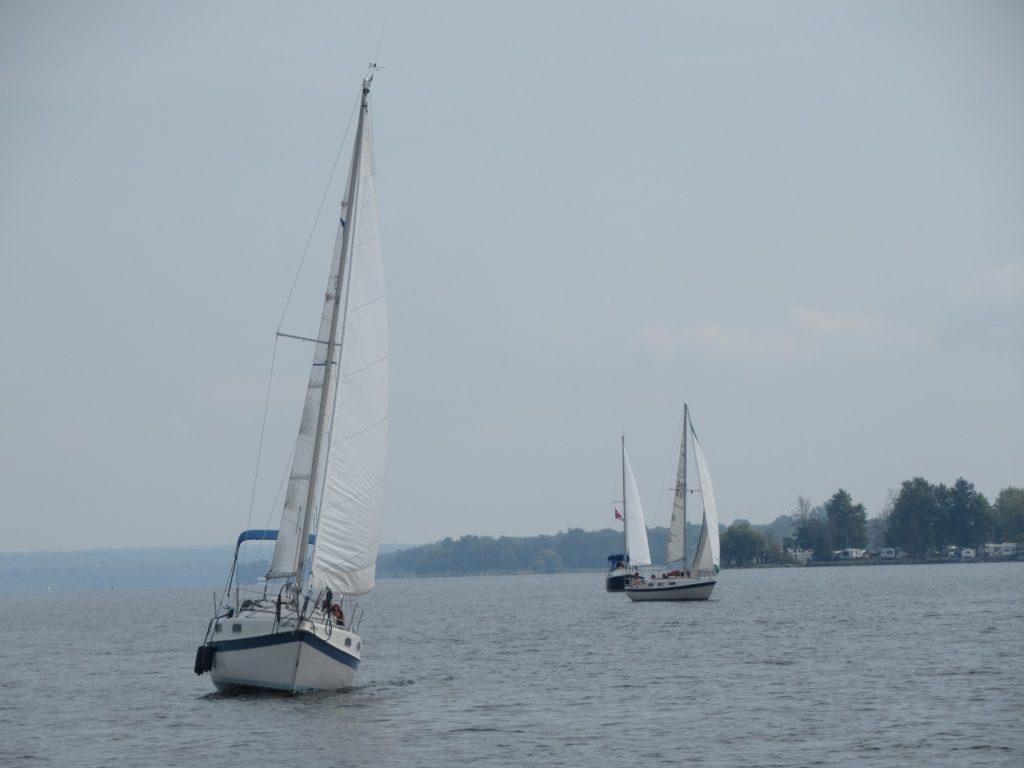 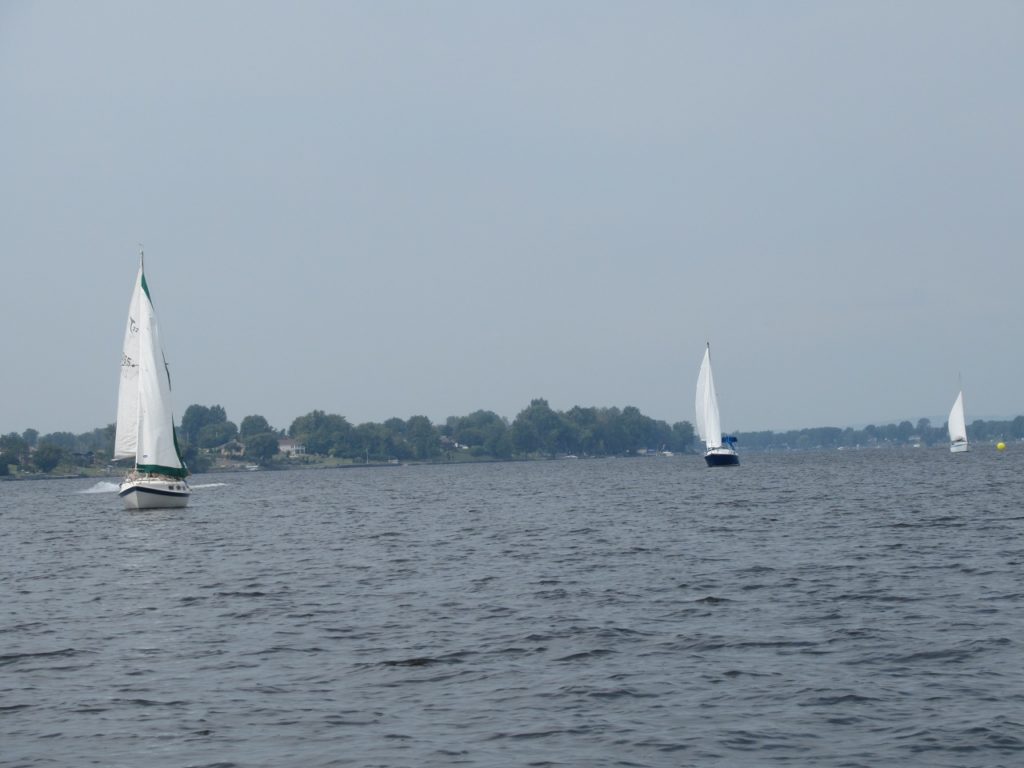