The COVID-19 outbreak at the Prescott and Russell Residence in Hawkesbury remained in effect as of Tuesday, November 17.  On Monday, November 16, Eastern Ontario Health Unit (EOHU) Medical Officer of Health Dr. Paul Roumeliotis announced that out of 97 cases in residents, 73 were resolved, meaning 24 cases remained active.  Among the 63 cases in staff members, 58 were resolved, meaning that five cases remained active among employees.  As of November 16, 160 people had been diagnosed with COVID-19 at the 146-bed Prescott and Russell Residence since the outbreak began on October 9.

The Residence outbreak has led to 12 deaths directly due to COVID-19.  Originally, that number had been as high as 19, but Roumeliotis explained on Monday that the classification of COVID-19 deaths in Ontario has changed and that people who die of other conditions complicated by COVID-19 after they have recovered are no longer being considered as COVID-19 deaths.

As of November 17 COVID-19 outbreaks under EOHU jurisdiction also remained in effect at Russell Meadows Retirement Home in Russell, the Open Hands-Ridgewood Drive Site group home in Cornwall, and at Woodland Villa in Long Sault.

There were 141 active cases of COVID-19 across the EOHU’s territory, as of November 17 out of a cumulative 766 cases that includes 595 resolved cases.

Seven patients from the EOHU’s jurisdiction remained in hospital due to COVID-19 as of November 17 and no patients were in intensive care.

There had been 30 COVID-19 deaths across the EOHU’s territory as of Tuesday.

As of November 17, 78,975 COVID-19 tests had been performed at the EOHU’s six testing facilities and by paramedics.

The EOHU territory remained as an orange-restrict zone under Ontario’s system of COVID-19 restrictions as of Tuesday.

According to the Government of Ontario list, there were active cases of COVID-19 at the following schools under EOHU jurisdiction on Tuesday, November 17.  Two or more cases per school is considered an official outbreak.

One student at Eamer’s Corners Public School in Cornwall

The Government of Ontario list reported active cases of COVID-19 at the following childcare facilities under EOHU jurisdiction on Tuesday, November 17.  Two or more cases per childcare facility is considered an official outbreak.

One employee at Kawehnoke Child Care Centre in Akwesasne

On November 16, Roumeliotis said that the EOHU is already beginning to plan how it will store and distribute the COVID-19 vaccine once it becomes available.  The Pfizer vaccine announced the previous week requires storage at minus 70 degrees Celsius while the Moderna vaccine announced on Monday requires storage at minus 20 degrees Celsius.  Both vaccines have a shelf life of several days when not stored at the proper temperature.

The Ministry reported that 80,430 or 83.1 per cent of cumulative cases were resolved as of November 16.

There were 529 COVID-19 patients in hospital across Ontario as of November 16.  Out of those 529 patients, 127 were in intensive care, and 75 patients were on ventilators.

There had been 3,383 deaths due to COVID-19 across Ontario as of November 16, composing 3.5 per cent of all cumulative cases. 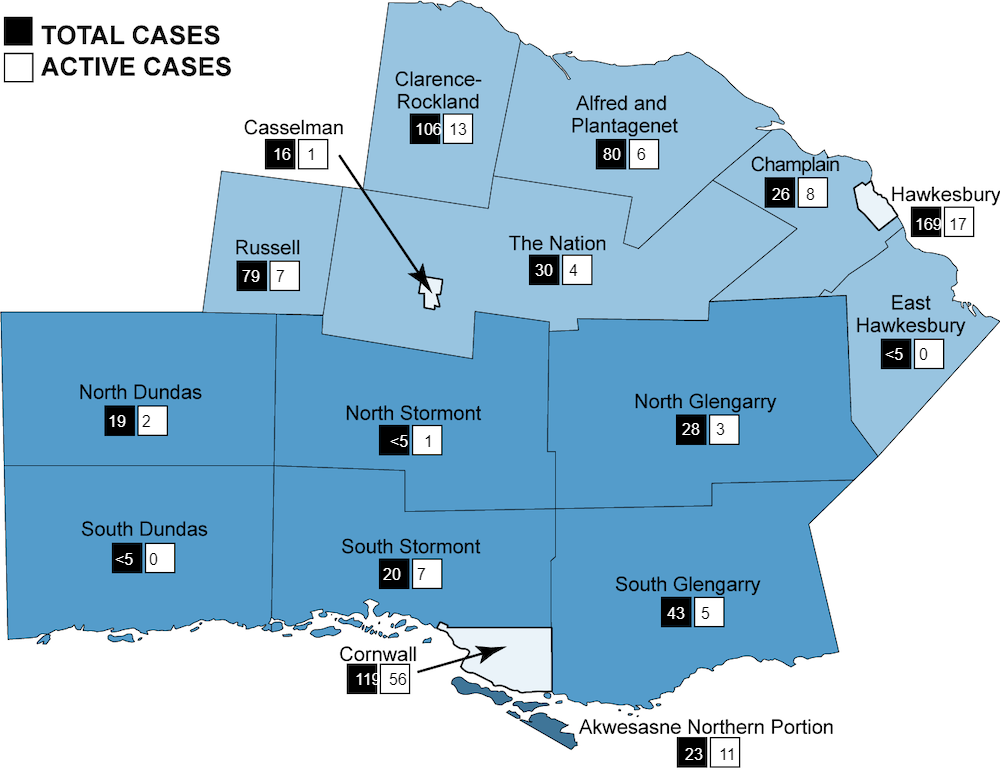