According to a UCPR press release, the person is self-isolating and receiving any necessary treatment, and the Residence is carefully monitoring other residents and staff members for any symptoms consistent with COVID-19 infection.

Residence staff have implemented full outbreak protocols. They are taking every step to protect residents and staff from the effects of the disease and from further spread of infection, including the deployment of community paramedics.

Both residents and staff members that might have been exposed, but who exhibit no symptoms, are self-isolating. The Residence has plans in place to adapt to the absence of the staff members who are in isolation.

The UCPR continues to work closely with the Eastern Ontario Health Unit (EOHU), which is following up and tracing contacts to contain any further propagation.

Elsewhere across the jurisdiction of the EOHU on October 9, the only other institutional outbreak of COVID-19 in effect was at Foyer St-Jacques nursing home in Embrun.

EOHU cases as of Friday

There were 87 active cases of COVID-19 across the jurisdiction of the Eastern Ontario Health Unit (EOHU) as of Friday, October 9, bringing the number of cumulative cases to 329.  Out of that amount, 230 cases were officially resolved.

“We know exactly where they are coming from,” said EOHU Medical Officer of Health Dr. Paul Roumeliotis.

He explained that the recent cases mostly were the result of parties and other social gatherings residents attended in Ottawa or in the local area.

There were 21 active cases of COVID-19 in the United Counties of Stormont, Dundas, and Glengarry and the City of Cornwall as of October 9.  There was one active case in the Township of North Glengarry.

As of Friday, October 9, there were COVID-19 cases at the following schools across the EOHU’s territory.  Most of them were at schools in Embrun and Russell.

One student at École élémentaire catholique Sainte-Félicité in Clarence-Rockland

One student at École élémentaire catholique St-Joseph in Russell

One student at École élémentaire catholique St-Viateur in Russell

One student at École élémentaire catholique St-Victor in Alfred

One student at École secondaire catholique L’Escale in Rockland

The number of COVID-19 deaths across the EOHU territory as of October 9 remained unchanged at 12.

As of October 9, 67,422 COVID-19 tests had been performed across the EOHU`s jurisdiction at the six testing centres and by paramedics.

The significant increase led Premier Doug Ford to convene an emergency cabinet meeting on Friday where a decision was made to place Ottawa, Toronto, and Peel under a modified version of Stage Two restrictions on businesses and other public activities due to the high rates of COVID-19 in those regions.

The Ministry reported that, 49,032 or 85 per cent of cumulative cases were resolved. As of October 9, there were 225 COVID-19 patients were in hospital across Ontario.  Out of those 225 patients, 47 were in intensive care, and 29 patients were on ventilators. 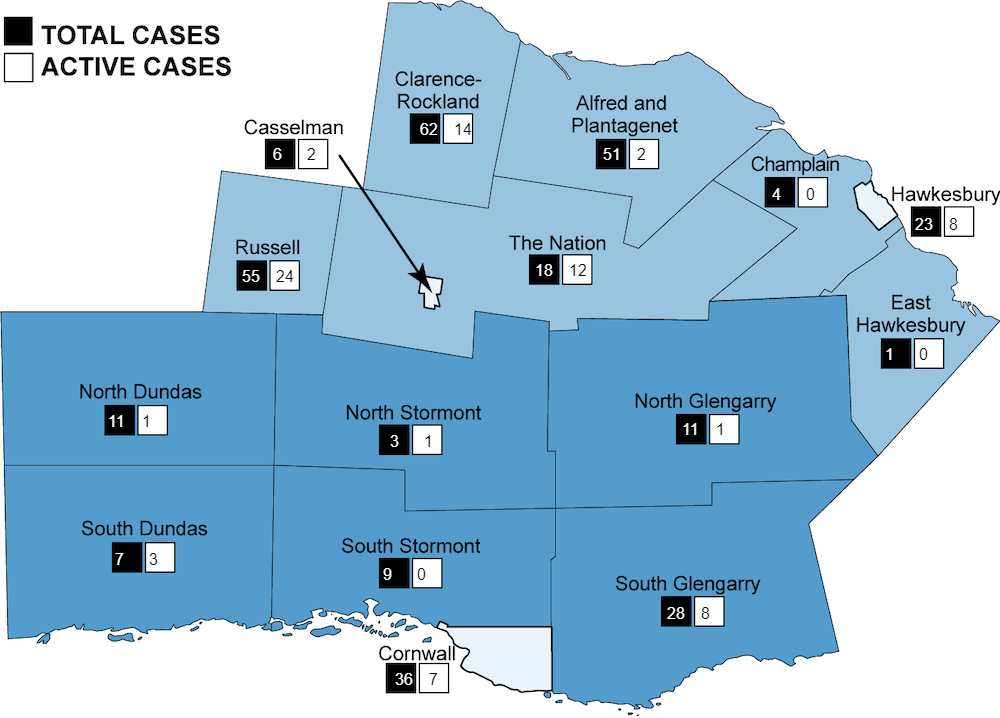