“Listen to what your heart is telling you”: heart surgery survivor 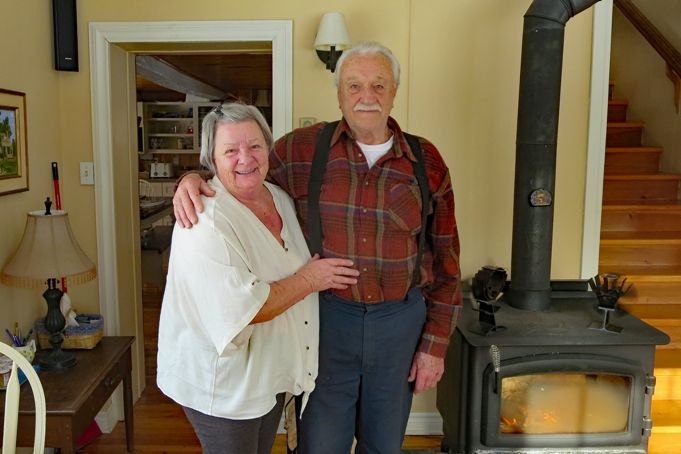 J.P. Soumis, here with his wife Pati, wishes he hadn’t ignored troubling symptoms for so long.

J.P. (Jean-Pierre) Soumis ignored symptoms for several months. Soumis, of Glen Robertson, found he was often out of breath, and there was a heaviness in his chest.

“You don’t like to say you’re sick,” says Soumis. He mentioned his symptoms to his nephew, a paramedic, and his nephew urged him to seek medical attention. But still, Soumis, then 75 years old, put it off.

One sweltering day in September 2018, Soumis, who had been working outside, came into the house to tell his wife, Pati, that he thought he should go to the hospital.

At the Hawkesbury and District General Hospital, Soumis was quickly admitted to the intensive care unit. He was transferred to the Royal Victoria in Montreal to be assessed for stents. An angiogram showed Soumis had three artery blockages, one of them at 95%. Considered too blocked for stents, Soumis was scheduled for surgery.

Two days later, Soumis underwent triple-bypass surgery at the Royal Vic. After the surgery, Pati was told by doctors, “If you didn’t have such a strong man, we would have lost him.”

After a week in hospital, Soumis was sent home to continue his recovery. He had been told to walk as much as he could to aid his recovery. But, on an outing to Vankleek Hill with Pati, Soumis found he didn’t have the energy to walk up a wheelchair ramp.

At the Hawkesbury hospital, it was discovered that Soumis’s lungs were filling with fluid. Over two litres was drained from his lungs. Because the fluid prompted wracking coughs, Soumis’s rib cage—opened during the bypass surgery—had reopened.

Back at the Royal Vic, Soumis’s rib cage was tied back up—more firmly this time.

“I looked like I was trussed with a clothesline,” says Soumis.

A further complication appeared. An infection ravaged Soumis’s leg, from where a vein had been removed to form a bypass to his blocked arteries. Soumis stayed in hospital for 43 days.

“When I came home,” says Soumis, “I couldn’t do anything for over a month.” Pati took over the heavy chores like fetching wood for the woodstove.

Home-care nurses, arranged by the Royal Vic, came in daily to change the dressings on his chest and leg. Soumis and his wife said the nursing care was “top notch.”

Soumis kept a low profile for a while, just taking short walks near the house. Later he resumed some activities, like his weekly cribbage and pool games.

Over a year later, Soumis says he feels “okay.”

“I don’t have the capacity I used to,” says Soumis. He’s become more aware of his physical state, but doesn’t let that stop him—he’s living every day.

Soumis hopes others won’t ignore symptoms, like he did. He believes he wouldn’t have had to go through all he did if he sought medical attention sooner.

“If people feel they have something,” he advises, “get it looked at right away.”

February is Heart Month. For information on heart health, visit www.heartandstroke.ca or contact a medical professional.