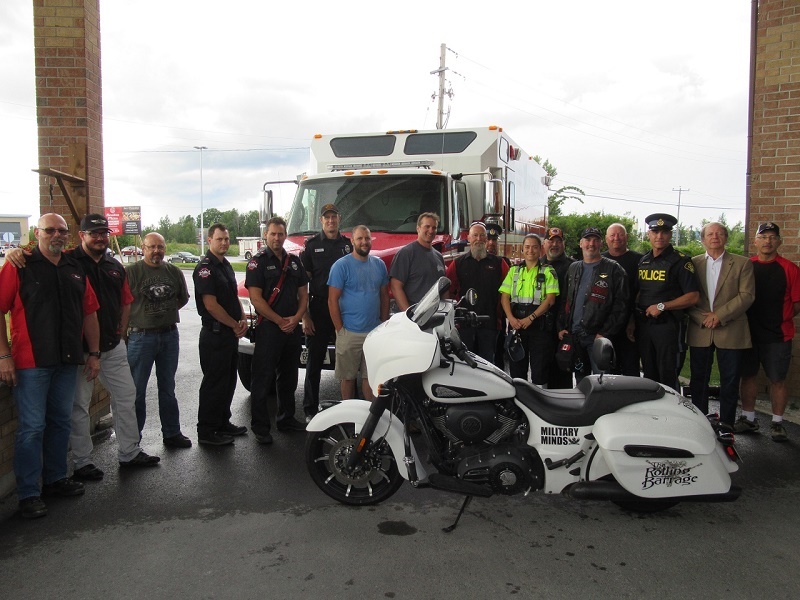 The Rolling Barrage rode into Hawkesbury on Saturday, August 8. The riders met with Hawkesbury firefighters and OPP officers at the Quality Inn, and were provided with a dinner at the Royal Canadian Legion. Photo: James Morgan

In land warfare, a rolling barrage is a slow-moving artillery attack.  It’s also the name of a campaign led by motorcycle-riding veterans making their way across Canada to raise money and awareness for veterans and first responders with post-traumatic stress disorder (PTSD).

The third Rolling Barrage arrived in Hawkesbury on August 10, presented by Military Minds, which raises funds to send former armed forces personnel, police officers, firefighters, and paramedics with PTSD on retreats and connect them with other services so they can learn how to live with their illness and share their experiences with others.

Hawkesbury firefighters and OPP officers joined in welcoming the riders at the Quality Inn where they were staying on Saturday night.

This year’s Rolling Barrage left Halifax on August 6 and is hoping to arrive in Burnaby, BC on August 21.  Its arrival in Hawkesbury was a bit earlier than scheduled on August 8 because the riders stayed on major highways in the occasionally rainy weather, rather than making scenic detours or stopping to see sights.  The number of riders has varied day-by-day throughout the journey.  There were 46 of them on the highway heading to Hawkesbury.

Military Minds President Scott Casey has experienced PTSD first-hand.  He served in the Canadian Armed Forces in Bosnia from 1992 to 1993.

“I came home, and my life changed,” he said.

Casey was not properly diagnosed with PTSD until 2008.

Iconic brand Indian Motorcycle donated a bike for this year’s Rolling Barrage.  Veterans had to submit a written application to be selected as the person who gets to ride it across the country.  Mike Clint of Kelowna, BC was selected.

Clint served for eight months in Afghanistan in 2008.  He has PTSD, a brain injury, and serious back problems resulting from his service.  He explained all those things in his application, along with the challenges he’s had with navigating the benefits system through Veterans Affairs Canada.

Motorcycling is highly popular with veterans.  When asked why, Casey alluded to the freedom of the open road.

“When you’re on a motorcycle, you don’t have time to think about anything else but riding, it’s very holistic,” he said.

The Rolling Barrage is being accompanied by a semi truck support vehicle towing a large camper trailer, both of which are painted with scenes honouring veterans and encouraging public support for troops.  It is owned and driven by Mike “Motor” Rosenau, a truck driver from Alberta who supports Military Minds.

The Hawkesbury Royal Canadian Legion branch hosted a dinner for the Rolling Barrage.

“Your caring support to military, police, and first responders that suffer from work-related PTSD, no matter the trauma that caused it, is vital to their recovery,” was Mayor Paula Assaly’s message to Military Minds and its mission.

On Sunday, it rumbled on to Parliament Hill in Ottawa where it was greeted by three Members of Parliament, retired Generals Lewis MacKenzie and Peter Devlin, and current Chief of Defence Staff, General Jonathan Vance.