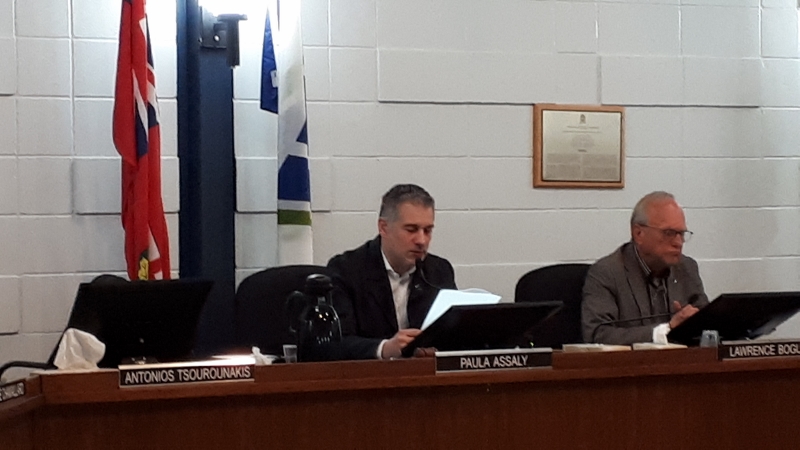 Efforts to increase the salary of Hawkesbury’s mayor by 53 per cent are on hold.

On May 13, council voted to revisit a by-law that would have increased Mayor Paula Assaly’s yearly salary from $36,329.02 to $55,583.40; the by-law has been returned to staff for amendments and re-writing.

Assaly declared a conflict of interest for the discussion and vote on the by-law.  She left the council chambers and Councillor Antonios Tsourounakis acted as chair of the meeting.

The draft by-law stated several reasons for the increase.  One of them was the increased workload for the mayor due to the abolition of the position of administrative assistant to the mayor as a cost-cutting measure.

The mayor now commits 50 to 70 hours per week to her duties and the by-law document said the role is now “a full-time job.”

According to the by-law, if the mayor was working for 35 hours per week for the town, she would be earning $19.96 per hour for attending meetings only.  That amount is also the lowest salary scale category for unionized Town of Hawkesbury employees.

The mayor of Hawkesbury presently receives the lowest salary of any mayor in the United Counties of Prescott and Russell.  The increase would bring the salary in line with the other municipalities.

The by-law document also notes there was no transition plan in place when the new council took office to inform them of their roles, responsibilities, and remuneration.

Councillor Yves Paquette said he is not against increasing the mayor’s remuneration but would rather see it done incrementally instead of all at once.

Paquette said the reference in the by-law to the mayor requiring a “certain level of education” due to the complexity of the issues she must address should not be part of the text.  Lefebvre and Tsourounakis agreed.  Tsourounakis said education does not necessarily equate with ability.

Following the meeting, Paquette emphasized that his objections were not meant as anything personal towards Mayor Assaly.

Lefebvre, whose previous career was in municipal government, said some things in the by-law could not be enacted as they were written, such as the reference to the role of the mayor now being a full-time job.

He added that referring to the mayor’s “employment” should also be removed because council members are not technically employees of the municipality.

Council approved first and second reading of the by-law, but it will not be given third reading and signed into law until further discussions take place and changes are made.