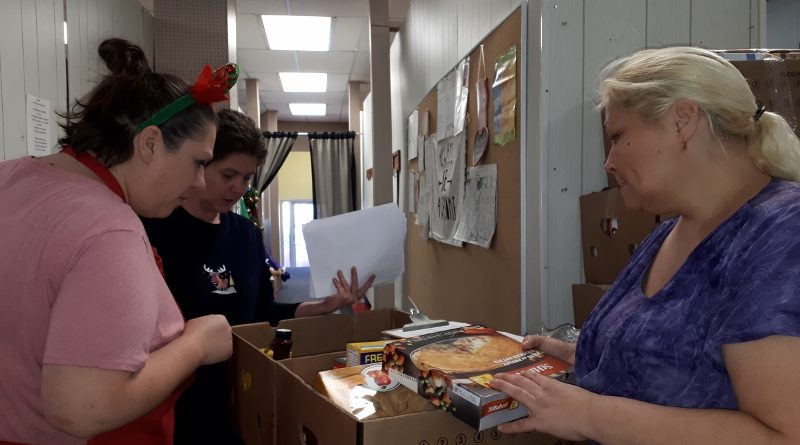 The Hawkesbury Central Food Bank has taken on the look of an assembly line lately as volunteers are busy putting together Christmas food boxes for clients.

Cardboard boxes are lined up along the front hall, full of food, ready to be picked up or delivered.

This year, the food bank has been assembling and distributing several boxes each day, rather than doing all the work at once.

Manager Stephanie Bierma said 393 Christmas boxes had been requested as of December 13, up from 325 at this time in 2017.

“And we’re not done yet,” she said, noting that applications were still being taken.

According an article in The Review from a year ago, the Hawkesbury food bank ended up distributing over 500 Christmas boxes by the end of the 2017 season.

Bierma said she regularly has about 10 volunteers who help at the food bank.  Missionaries assigned to the Latter-Day Saints (Mormon) church in Hawkesbury also help regularly.

The Hawkesbury Walmart store is a regular contributor, said Bierma, and the FreshCo store has also recently donated.

Food is also collected by other businesses and organizations. The large number of non-perishable grocery items that customers have left near the counter at the Caisse populaire de Hawkesbury is just one example.

Any donations of perishable items like meat and frozen food are stored in the food bank’s refrigerators and freezers.

Bierma said that for Christmas, meat pies and hams are an added to the boxes, and any turkeys the food bank receives are cut in half and given to families and households with large numbers of people.

According to Food Banks Canada, the national organization of food banks, an average of 850,000 Canadians use a food bank each month and 13 per cent of Canadians are in a state of food insecurity. That means they do not have access to safe, high-quality, nutritious food.

Low income remains the biggest cause of food insecurity for Canadians who use food banks.