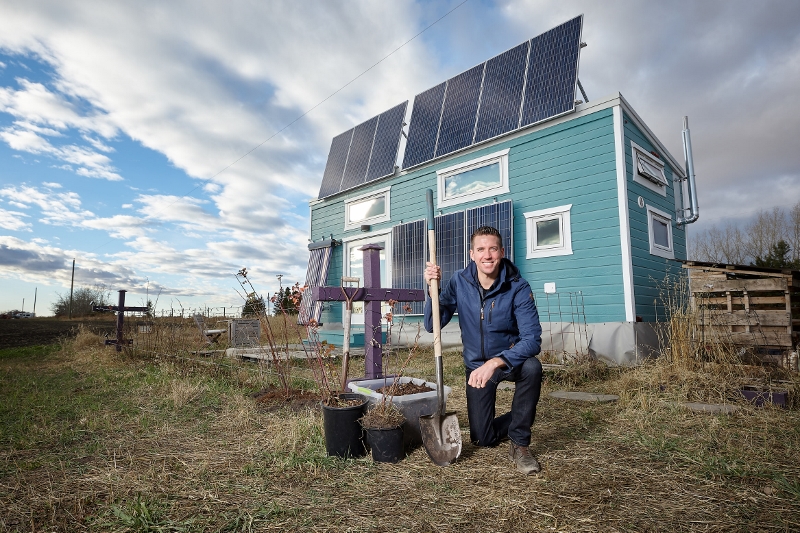 Kenton Zerbin and his tiny house in rural Alberta. Photo used with permission of Kenton Zerbin.

Are you looking for a smaller, simpler home that is easy on your bank account, and the environment? You can find out how to build one, thanks to a workshop taking place from February 8 to 10 at Zudio in Vankleek Hill.

Kenton Zerbin, an Alberta-based expert in the “tiny home” movement that is popular across North America right now, will be conducting a workshop on how to build one of the diminutive domiciles.

The other places Zerbin gives his workshops include Edmonton, Regina, Winnipeg, and Toronto. When asked why he chose to give one in a much smaller place like Vankleek Hill, he said that his organizer in Ottawa suggested it because Zudio has the space, and Vankleek Hill is located halfway between Ottawa and Montreal, which makes it easy for people from either city to attend.

“I think it’s a trend in the right direction,” said Zerbin about the popularity of tiny homes in recent years. He said houses were generally getting larger and larger, and that’s not something everyone wants.

Zerbin, 31, originally trained as a teacher and embarked upon a career teaching high school. However, he grew disillusioned with how the education system was preparing people to live with nature. That’s when he got interested in permaculture, which he described as a design science modeled after nature itself.

He says permaculture is living with the land, rather than off the land.

At the workshop in Vankleek Hill, Zerbin plans to show participants how to design an efficient home and teach them the basics of structural design.

Zerbin said he really tries to “walk the talk” when it comes to sustainability.

He said, though, that it’s important to evaluate each building material for its compatibility with nature and the needs of the people who will be living in the home in order to justify its use.

While a lot of tiny homes being constructed are in urban areas where space is limited, and the cost of regular housing is high, Zerbin said they also can serve rural residents too.

“They’re extremely versatile as a housing system,” he said.

Zerbin himself lives in a tiny home “in a farmer’s field” with his wife and cat, north of Edmonton.

He said that tiny homes are great for retirees, minimalists, the ecologically-conscious, or anyone not wanting the work and costs associated with owning a regular house.

“People don’t have to live for their houses,” he said.

Savings for tiny homeowners can be significant. Zerbin said he only paid $260 to heat his home for all of 2017, and that’s in northern Alberta where temperatures can get awfully cold in the winter.

Zerbin’s tiny house and permaculture work has been featured on television, radio, and newspapers across Canada.

For more information on the tiny house workshop in Vankleek Hill at Zudio, and to register, go to https://kentonzerbin.com/product/tiny-house-workshops/