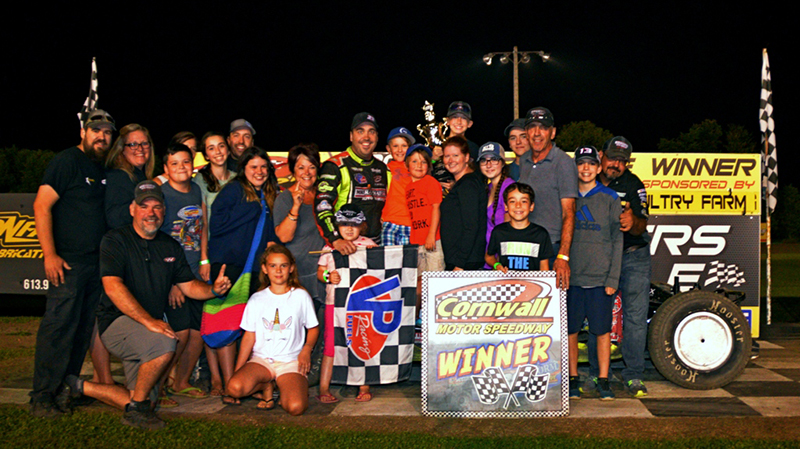 “Racing and winning is a family affair for the Ladouceur clan as they celebrated Joey Ladouceur’s first ever 358 Modified last Sunday night.” S. Lauwers photo

A feature win is to a racer what freshly baked apple pie is to a hungry kid who played outside all afternoon in the snow. For Alexandria’s second generation racer Joey Ladouceur, his 358 Modified victory last Sunday night at Cornwall Motor Speedway was like an apple pie with two scoops of ice cream on top.

Over the last two decades the 42-year-old DIRTcar racer posted victories upon victories –over 120 feature wins in his career – no matter in what division he raced; even clinching a Pro-Truck Championship at his first and only season of paved track racing. But after joining the 358 Modified division in 2016, bringing the family Owen #23 machine to the victory lane wasn’t as easy as Ladouceur would have thought. “We finally got it done. Since I’ve been a little boy I’ve dreamt of winning a race in my dad’s #23. Although it may have taken a little longer than I expected, it doesn’t make it any less sweet. Tonight makes it all worth it!” was Joey’s post on Facebook after his first ever 358 Modified victory.

“Racing the #23 MrRad Modified is a family project”, says Ladouceur to The Review. “My brother Lee and I both share the race car, he races it on Friday nights, and I drive it on Sundays at Cornwall Speedway. We help each other to make it competitive every weekend. I would have been just as happy to see Lee be the first of us to bring dad’s (Laurent ) #23 to the winner circle. But I’m super happy that I was able to get the win, with Lee and the whole family able to celebrate that first Modified feature win with me.” 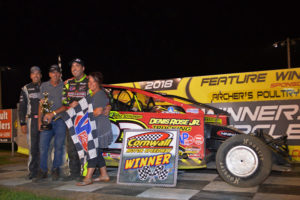 TEXT AND PICTURES BY S.LAUWERS