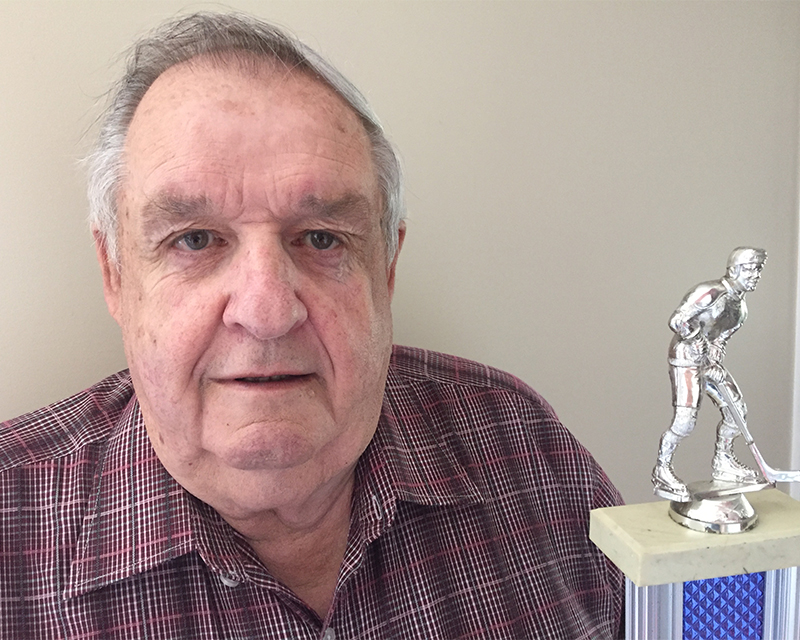 George Currier of Maxville is a man of many talents and will be recognized this year for his many contributions to Glengarry sports. George played most sports all his life in and around the area. As the second youngest of 13 children, he played hockey, broomball and softball, just to name a few of the sports he enjoyed. He played PeeWee, Bantam, Midget and Old-Time hockey as well as coaching and refereeing minor hockey in Maxville.

He refers to Nick Haramis as his partner in crime not just because of so much time spent working together, but also because of the good times spent playing and organizing sports together.

“I worked with Nick for 18 years after he bought the King George Hotel in 1958,” George explains. “We played hockey and softball together and started, organized and played in the Glengarry Old Time Hockey League. George’s older brother Edgar also worked at the hotel and together they organized Maxville’s first broomball league in 1966 that included teams from Alexandria and Cornwall as well.

He also coached the Maxville Junior B hockey team for eight years and succeeded in leading them to the Eastern Ontario Championship in 1966.

“It was no easy feat. We were playing against people like Larry Robinson.” He credits players like John Wensink who went on the NHL, the Haramis boys and Don Blaney who tried out for the Ottawa 67’s but decided to take over the family farm instead. “Of over 16 players on that team, half were from Maxville. It was a great year.”

George also coached in the Glengarry Soccer League and started the Warden’s Bonspiel in 1988. He continued to put on many more bonspiels and fundraisers to help organizations such as the Lion’s Club of which he was member for 45 years and twice president.

He worked for the Ministry of Transportation for Ontario for 15 years before retiring ad partnering with his son Kelly when in 1992 they bought and operated the sports bar in Maxville.

He was also MPP Ozzie Villeneuve’s chauffeur for a while.

“One day Ozzie asked me if I’d ever considered politics. He suggested I run for councillor. So I did.” George was involved for 30 years, as Reeve of Maxville for 15 years and Warden for Stormont, Dundas and Glengarry.

At 81 years old, George is still involved in curling, though he stopped curling two years ago because of his knees. He spends a lot of time with his wife of 57 years, Annette, their three children, six grandchildren and two great grandsons.

He recalls his 80th birthday last year when MPP Guy Lauzon presented a flattering speech about him.

“My great grandson was really impressed. He wanted to get up and say something afterwards.” George laughs. “ For some reason he thinks I’m the Prime Minister.” George will be inducted into the Glengarry Sports Hall of Fame August 15 in Alexandria.