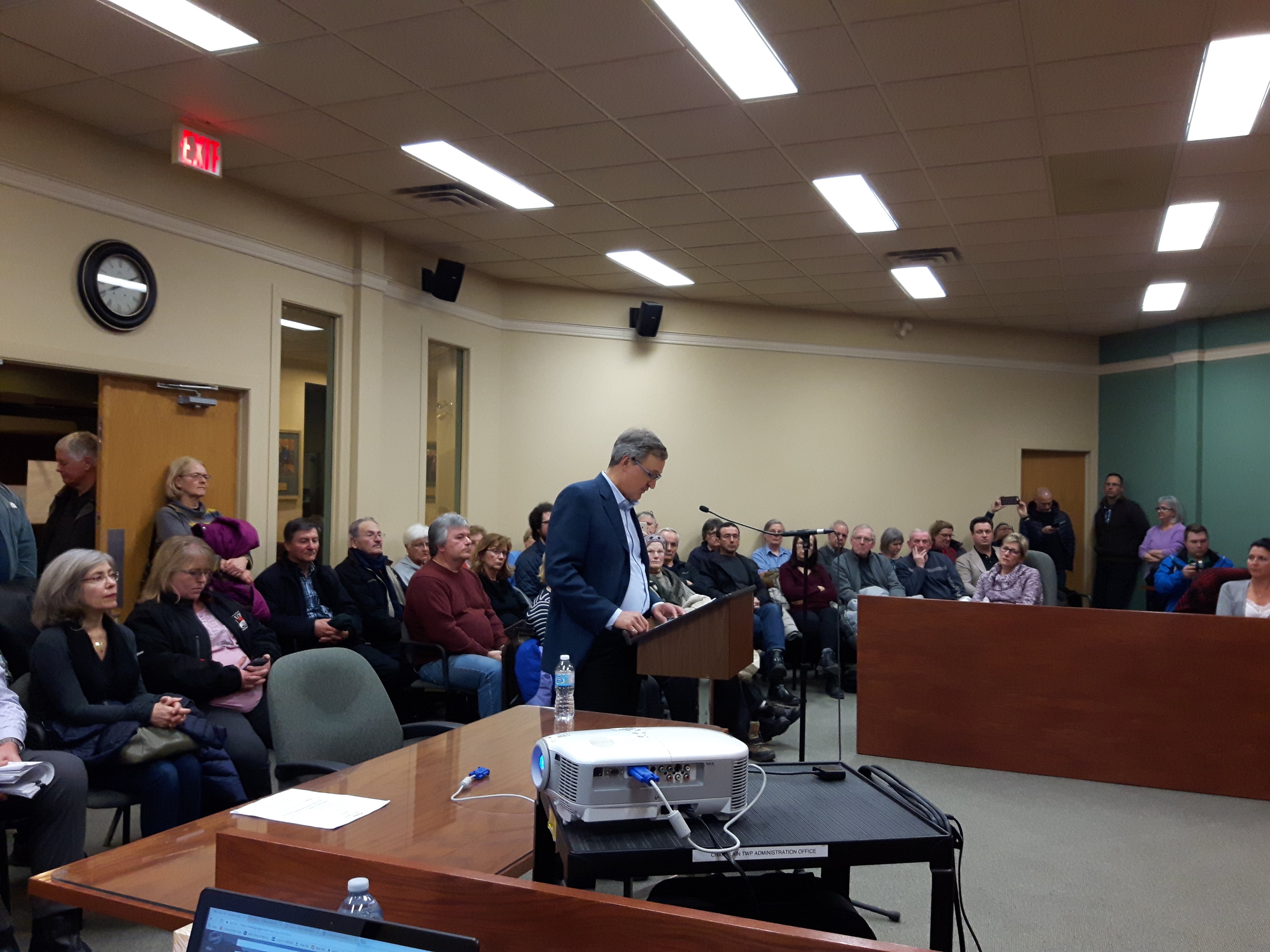 Action Champlain spokesperson Charles Despins addressed Champlain Township council at a February 13 council meeting. Action Champlain members packed the council chambers to show their support for Despins’ request. On behalf of Action Champlain, Despins asked the township for $200,000 to help pay for technical and expert fees as the group prepares to defend its appeal to the Ontario Municipal Board, set for September 2018.

Action Champlain spokesperson Charles Despins told Champlain Township councillors that the citizens association and the township should be working together in some ways as the Ontario Municipal Board (OMB) hearing surrounding the proposed Colacem plant near L’Orignal is about five months away. Action Champlain is looking for funds to offset the cost of fees for technical experts and reports as it prepares its case for the OMB.

At an OMB pre-hearing last year, the official hearing was scheduled to begin on September 4, 2018 and may take four to five weeks. Two appeals have been made to the OMB related to the Colacem project and both parties agreed to have their cases heard as part of a single hearing.

First, Colacem Canada Inc. is appealing Champlain Township’s refusal of a zoning change. A second appeal has been launched by Action Champlain, a citizens group which has been opposing the cement plant. Action Champlain is appealing the United Counties of Prescott-Russell’s amendment to its Official Plan, allowing for the plant’s construction on land which fronts Highway 17.

Despins addressed council at its most recent meeting on February 13. He began by thanking the township for its support (the township rejected Colacem’s request for a zoning change).

In the past year or so, Despins said that citizens opposed to the cement plant have “voluntarily taxed themselves” and donated money to the cause.

Action Champlain is requesting $200,000, or 50 per cent of the funds required to defend its opposition to the project. Despins told council that the amount being requested was one-quarter of the estimated $800,000 cost that Champlain Township Mayor Gary Barton had at one time referred to as the potential cost of being a party in the OMB appeal. (Champlain Township has not filed an appeal with the OMB, but it is registered as a participant.)

“This cost may seem huge,” Despins said, but asked council to consider the 425-foot smokestack, which “could impact this community for generations to come.” The investment, when compared to the long-term impacts of a cement plant in the township, is minor, he argued.

Despins emphasized that the funds contributed by the township would be used to pay the fees of technical experts, arguing that funding studies and hiring experts would be consistent with the township’s status as a participant in the OMB hearings.

“All those who already contributed directly to the fight will also want to know that the support of their elected officials also translates into financial contributions from their municipal government,” Despins said, reading from a prepared statement.

Despins had earlier pointed to the 273 citizens who had taken the time to provide verbal or written opinions regarding the proposed zoning change during both public consultations and said, “93% clearly stated that they were opposed to it.”

In closing, Despins asked council to advise Action Champlain of its decision by March 13, seeing that the OMB hearing is not that far away.

“Please work with us because you are ‘us”,” Despins ended.

Mayor Gary Barton replied that council was also fighting the battle and said the township has its own costs associated with the hearing.

Barton asked how much citizens had voluntarily paid into Action Champlain. Despins answered that about $100,000 had been raised by citizens since the formation of the group.

Despins asked Barton how much the township had spent dealing with the Colacem project to date, and Barton answered that $7,000 had been spent in 2017 and that $15,000 in anticipated expenses had been added to the 2018 budget.

Despins said that he expects an additional $100,000 will be required during the year leading up to the decision and said Action Champlain will be asking its citizens for support again.

In an email sent to The Review after this council meeting, Michael Santella, who is a director of Action Champlain along with Despins, pointed out that another investment on the part of citizens has been a significant amount of hours spent to inform people, work on Facebook pages, website design and updates, regular group meetings, lawyers and experts meetings, meetings with the mayor and councilors, letters written, etc. Santella estimates this time to be close to 10,000 hours, which a conservative estimate would translate into $300,000.

Read a previous story about the proposed cement plant.

At the counties, mayors hold line on cement plant.

More people than ever before are reading The Review’s content. If you are reading this story and you are not yet supporting independent community journalism, think about it. Your support helps The Review to do more and to be there when you need us.