Youth broomball league in the works for Vankleek Hill area 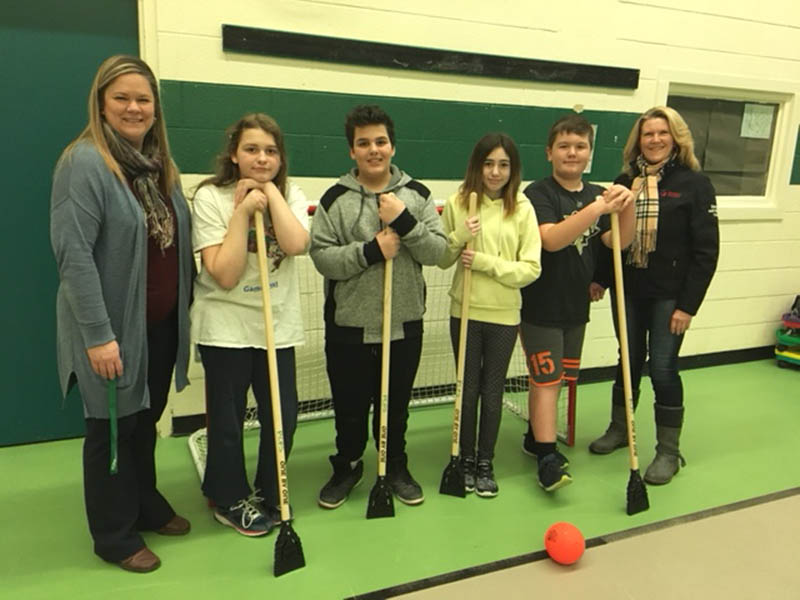 Pleasant Corners Public School Principal Dominique Bertrand (seen at left) is with students and Dawn MacDuff (at right) with some of the equipment received from the “Lace to the Top” broomball program.

Dawn MacDuff is on a mission. And her successful application to the “Lace to the Top” program is just one more step along the way to her mission of establishing a youth broomball league in Vankleek Hill.

You may have heard of MacDuff, a steadfast volunteer and coach for local soccer and is involved with several broomball teams in the region.

She has been playing broomball since she was an elementary school student, recalling her early days at Vankleek Hill Public School, playing broomball on an outdoor rink. Her enthusiasm may stem from her father, Horace Nixon, who was a broomball enthusiast himself.

MacDuff originally wanted to apply as the soon-to-be-formed Vankleek Hill Youth Broomball League, but the program requirements stated that a school had to be identified in the application. MacDuff chose Pleasant Corners Public School (PCPS) because that is where her children attended school, she says, but now that she has the equipment in hand, she hopes to take the program to other schools in the community.

She is especially pleased to have received 24 brooms, 12 balls, 100 score cards and 100 tags, plus a broomball coach booklet — to kick off some training for students in Grades 2 to 8. The equipment package was awarded to only four groups in Ontario – and is one of 25 awards across the country as part of the program, which is funded by the Canadian Broomball Federation.

On February 26 and 27, students in Grades 2 to 8 at PCPS will receive a basic introduction to the sport, MacDuff says, adding that she hopes that this basic intro will give youths a head start when registration opens in the fall. MacDuff will work with George Brown, who is currently president of the Canadian Broomball Federation and also sits on the board of directors for the Ontario Broomball Association. He is an inductee into the Ontario Broomball Hall of Fame. MacDuff and Brown will work with the students throughout the two days at PCPS.

MacDuff says that the nearest youth broomball groups are in Finch and Russell. Her dream is to create a local youth broomball group, saying that the sport is affordable (less equipment is required than for hockey) and she wants to keep it local, so parents do not have to drive great distances.

“Canada has a long winter season and hockey might not be for everyone, but lots of hockey players and soccer players like broomball. There is a lot of running involved, so it is very good fitness-wise,” says the recently retired public health nurse.

And if anyone should know about the fitness quotient of broomball, it is MacDuff. She plays with the Vankleek Hill Ladies Broomball League and also plays for a team in Williamstown and she plays on a Masters Ladies team, which has a regional and provincial championship coming up. She has been a trainer with the Quebec Huskies Elite Broomball team since 2014 (possibly the most-decorated team in Canada, having won 14 Canadian championships and most recently, having won the world broomball championship in 2016.) and recently began co-coaching the Seaway Valley Devils (juvenile girls), who have qualified for the nationals in April. She has her National Coaching certification for competitive broomball.

MacDuff is a big believer in what sports can do for young people and is involved with the Glengarry Soccer League and the Vankleek Hill division.

She believes that you never write off a player and is always surprised at how young players evolve over time.

“You can’t look at a 12-year-old and say, ‘you’re never going to make a player out of that child.’ You can watch that same player at 15 years old and that can be a player who has learned the skills and knows how to play the sport. I am very competitive but it is truly the sport and the people you meet that brings the greatest enjoyment,” says MacDuff.

Currently coaching a juvenile girls broomball team since October, she says she is amazed at the dedication of the girls and of the coaches and parents.

“Kids are so impressionable and as a coach, you want to do your best for them,” says MacDuff.

She insisted the story not be about her, but about broomball, which she pointed out was one of Canada’s six heritage sports, designated as such by Heritage Canada.

“Sports can build up communities or tear them down. I always aim to make sure that we are building.”

She says the commitment of parents is so important. Before social media existed, kids were not connected to each other after they went home from school and getting to sports and extracurricular activities was a priority because they could not wait to see their friends, she says. Today, things are different, but she says she has been lucky and has had excellent turnout for practices.

“Kids are pulled every which way, and I have been blessed with fabulous parents who are very good on the sidelines, too,” she says.

As she talks about the Vankleek Hill youth broomball league, she says she already has a few sponsors lined up, but still has room for more. She is also on the lookout for volunteers, who will be needed for the different age groups. She is hoping for Sprouts (age 4 to 8), PeeWee (age 9 to 11), Bantam/Midget (age 12 to 15) and Juvenile-level (16 to 19) teams. She will be working on lining up some ice time in Vankleek Hill, but indoors, she says, as games must go forward and the outdoor rink could be dicey if weather changes.

If you want to learn more, want to offer to be a sponsor or volunteer or speak to MacDuff about youth broomball, email: [email protected]