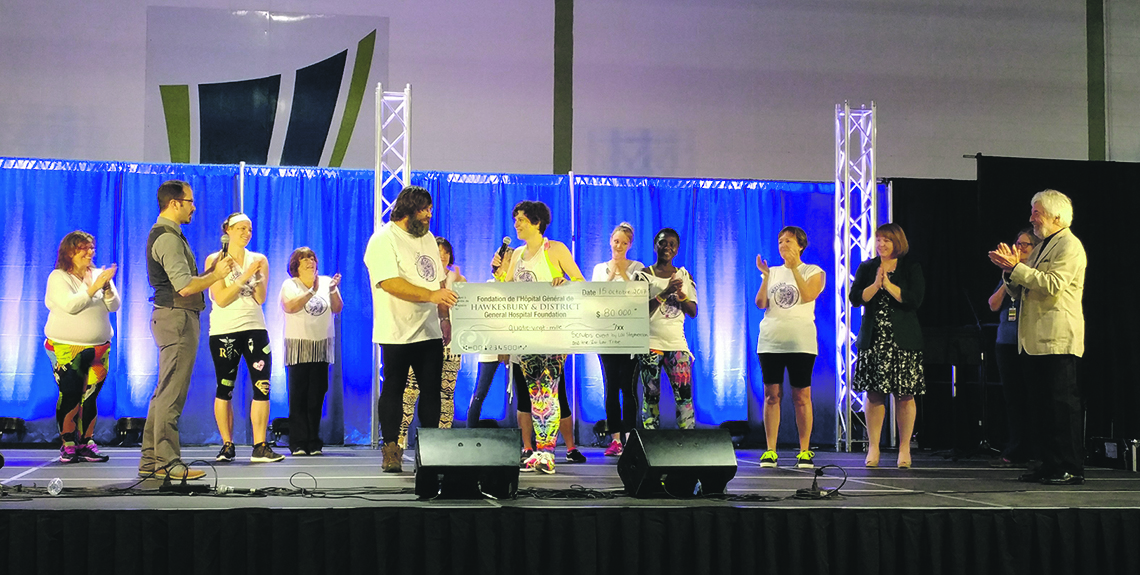 Torrential rain was the backdrop of the 11th Hawkesbury and District Hospital Radiotelethon but the morose weather did not stop people from calling in and sending the much-needed funds to acquire a new CT Scan and a MRI. The Radiotelethon, which was held on October 15 at the Robert Hartley Arena in Hawkesbury, had a great line-up of talented artists, thanks to Manon Seguin’s connections in the music  world.

Séguin has been a staple at the Radiotelethon since its beginning and hosted this year’s event along with the very talented musician Bobby Lalonde, journalist and producer Maxime Myre and Hawkesbury councillor Daniel Lalonde. Throughout the day, various volunteer organizations and businesses surprised viewers with checks. Samme Putzel and Suzanne Hocquard from Vankleek Hill’s Excellent Events gave $750.

Grace Batista and Felix Blackburn of Studio SL2 donated $1000. Marie-Ève Yelle and the Lefaivre Lions gave a cheque for $10,000. Jennifer Leblanc from the Hawkesbury BMO donated $35,000 to the cause. Gerry and Elizabeth Semmelhaack gave $12,500 to the foundation.

One of the big surprises of the day came from Zudio’s Scrubs initiative where medical professionals did Zumba to raise funds along with about 100 Zumba enthousiasts. Dr.Valery Rossbach had announced that if his personal donations reached $1,000, he wax his legs, chest, and back live on Facebook prior to the event. Dr. Richard McCall then upped the ante by stating that if Dr. Rossbach raised more money than he did, that he would shave his beloved beard.

Dr. Rossbach raised more than $7,000 and Dr. McCall had a little over $5,000. The beard had to go. But an benefactor saved facial hair by donating $50,000 to the Scrubs initiative. Louise Stephenson, owner of Zudio, came to the Radiotelethon for a Zumba demonstration and then presented a cheque for $80,000 to the HGH Foundation.

Friends of HGH, a group of volunteers who also operates the boutique at the hospital, presented a cheque for $75,000. For the sixth year in a row, the Champagne family from Hawkesbury, which won the $50 million lottery, presented a $100,000 check at the end of the day, bringing the total of funds raised to $506,504. Before presenting the check, Jo Ann Champagne gave an emotional account of her father and how much of a difference it would have made to have up-to-date equipment at the HGH at that time.

The radiotelethon ended with a touching rendition of Leonard Cohen’s Hallelujah, led by Manon Séguin and accompanied by her husband and piano man Christian Marc Gendron and Bobby Lalonde on the violin.