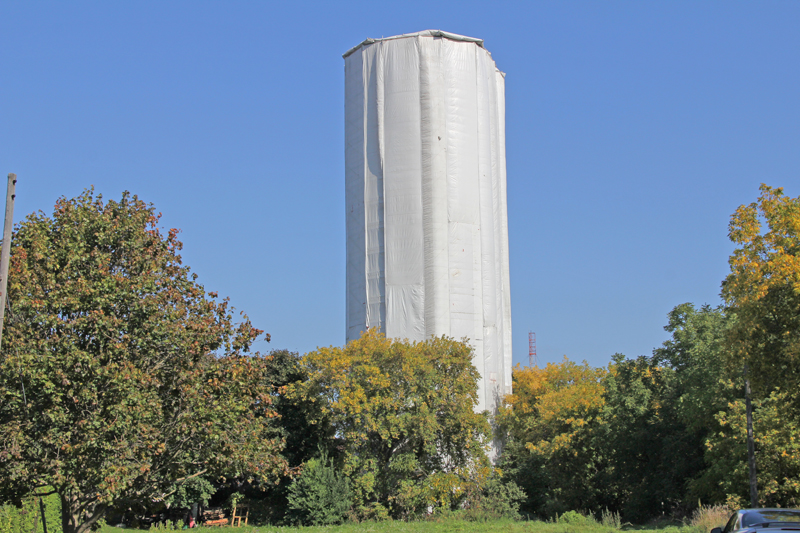 Repairs to the Vankleek Hill Standpipe are expected to be completed by the end of October. The $600,000 paint job includes removing the lead paint from the interior and exterior of the water tower and applying a new epoxy finish. (Photo: Tara Kirkpatrick)

Repairs to the Vankleek Hill standpipe (water tower) are running on schedule and on budget, according to Champlain Township Public Works Director James McMahon, who spoke with The Review on October 6.

The noise generated from sandblasting has left many local residents bristling over the past few weeks. The dull roar could be heard throughout the village. Once crews moved to the interior of the standpipe, the noise diminished considerably.

McMahon said that crews have finished sandblasting the lead paint from the exterior of the standpipe and they have applied two layers of off-white, epoxy paint. Vankleek Hill’s name has also been stenciled onto the side of the tower, in a style similar to what was previously used.

In Vankleek Hill, McMahon said that work is going well. Renovations are expected to be completed by the end of the month.

“The outside of the tower is just about complete. They are working on the painting stage and we expect to have the scaffolding taken down by the end of next week,” said McMahon.

Inside the standpipe, crews are hanging from a suspended scaffolding system, similar to ones used by window washers on high-rise buildings. The only access to the tower is through two small manholes at the base of the tower. Workers are busy sandblasting and priming the interior of the tower, in preparation for the application of three layers of epoxy paint. The epoxy finish will protect the integrity of the standpipe and prevent it from rusting.

The standpipe measures about 100 feet in height and is currently surrounded by 17 levels of scaffolding. When the standpipe is full, it holds approximately 2,400 cubic metres of water, which supplies the village of Vankleek Hill with drinking water.

In order to repaint the standpipe, water had to be drained from the tower. Vankleek Hill’s drinking water supply had to be redirected. Water is usually pumped from Hawkesbury and stored in the tower, which ensures a high quantity of water at all times. During the renovations, water is being pumped directly from Hawkesbury, to residents in Vankleek Hill.

So far, McMahon said there have been no disruptions in water supply and he said that water pressure has remained consistent. He said it was fortunate that there were no fires during this period, which would have put added demands on the system.

After the paint job has been completed, McMahon said the tower will be disinfected. This will be followed by a brief testing period. Water is expected to begin flowing from the standpipe by the first week of November.

McMahon joked that special attention will be made to ensure there are no spelling mistakes. When Mississauga painted its standpipe, McMahon said it took a year for people to notice that the town’s name was missing an “s.” In 2010, Stoughton, Wisconsin made national news when painters completed work on the 190-foot tower, which had 6-foot letters bearing the name “Stoughon.” The missing “t” was added a few days later.

Work on the Vankleek Hill standpipe is expected to cost about $600,000.