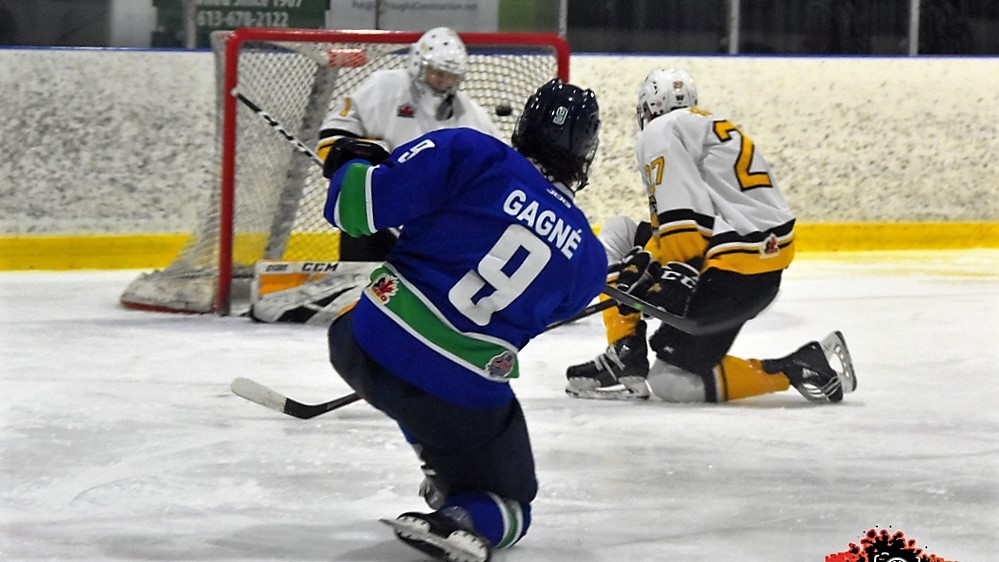 Hawkesbury Hawks forward Nathan Gagne fires a shot over the shoulder of Smiths Falls Bears netminder Dawson Labre. Gagne’s goal early in the third period cut the Bears’ lead to one goal, but Hawkesbury was unable to complete the comeback in a 5-2 loss. Photo: Sylvain Lauwers

The Hawkesbury Hawks closed out 2022 with a weekend home split at the Robert Hartley Sports Complex, beating the Cornwall Colts 3-1, before ending the year with a 5-2 loss to the Smiths Falls Bears.

With the split, the Hawks will finish 2022 in third place in the Central Canada Junior Hockey League’s (CCHL) Yzerman Division with a record of 15-11-2-3.

As the CCHL begins its Christmas break this week, the Hawks are off until Friday, January 6, 2023, when they will face the Carleton Place Canadians at The Bob.

Hawks General Manager Marc Bernique, who took over the coaching reins of the team two weeks ago, said changes he would like to implement have been slower than he hoped, but progress is being made.

“Our biggest thing right now is we have to play 60 minutes,” said Bernique, who feels lapses have been the team’s biggest weakness. “We’re having issues scoring goals too, but that will resolve itself.”

The Hawks GM said he is actively searching for a right-handed shot defenseman and would also like to find some help for the team up front.

While no practices are scheduled over the break, Bernique said he is counting on the players to work to improve while home with their families over the holidays.

“I’ve given the players some homework,” he said.

On Saturday (December 17) at the Robert Hartley Sports Complex, the Hawks (15-11-2-3) lost for the second time in less than a week to the 19-8-1-2 Smiths Falls Bears, who sit in first place in the CCHL’s Robinson Division.

The Bears had period leads of 1-0 and 3-1 in the 5-3 victory. Jakson Kirk tied the game for the Hawks early in the second, before the Bears responded with two goals of their own.

Nathan Gagne scored his seventh of the season for the Hawks at 4:56 of the third to cut the Bears lead to one goal. But Smiths Falls Jesse Lumsden answered exactly one minute later to restore the two goal advantage. Smiths Falls added an empty net goal in the final minutes to seal the 5-2 victory.

Dimitri Pelekos made 31 saves in the loss, while Hawkesbury fired 31 shots at the Bears’ goal.

Jakson Kirk, Ryan Liverman, and Brandon Clarke scored, while Dekon Randell-Snow made 27 saves, as Hawkesbury improved to 15-10-2-3 on the season.

Cornwall, which fell to a record of 11-15-1-0, had their lone goal from Nathan Garnier, while Dax Easter made 29 saves in the loss.