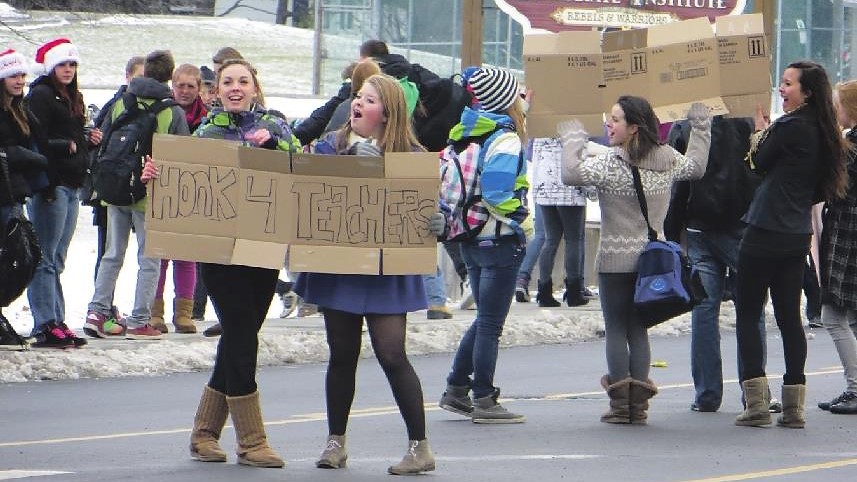 Students at Vankleek Hill Collegiate Institute took to the side of Highway 34 in December of 2012 to show their support for teachers in protest of Bill 115. Photo from the December 19, 2012, edition of The Review.

The Review, December 19, 2012 – EDMONTON – Edmonton police officers arrested 32-year-old Pascal Hotte, of Hawkesbury, on December 11. Wanted in connection with the murder of Grenville resident Marc Joly, Hotte was considered among Québec’s top 10 most wanted and has been charged with second-degree murder, pending a bail hearing.

Vankleek Hill fades away into piles of boxes

The Review, December 31, 1997 – VANKLEEK HILL – As its Bicentennial/Centennial year concludes, the Town of Vankleek Hill fades away – into piles of boxes. In 1997, residents have celebrated the 200th anniversary of the arrival of Simeon Van Kleeck and the 100th anniversary of the incorporation of the town. But there is no fanfare at Vankleek Hill town hall, which is being vacated, as the municipal corporation dissolves to become a ward in the new Champlain Township. New Year’s Day 1998 marks the start of a new era in local government.

The Review, January 1, 1973 – HAWKESBURY – At least 12 people were left homeless when a New Year’s Eve fire raced through a two-storey frame house on Highway 34, just outside of Hawkesbury town limits. There were no injuries. The dwelling, owned by Cleophas Myre, was destroyed by the fire, with damage estimated at $40,000. Hawkesbury firefighters battled the flames for nearly five hours.

The Review, January 1, 1948 – DALKEITH – The first shipment of turkeys to the USA was made on December 20. A.C. Campbell of Dalkeith exported a truckload of 1,023 live turkeys to New York. B. Dymond was the importer.

The Review, December 22, 1922 – ALEXANDRIA – Three buildings were destroyed and a fourth badly damaged by a fire which broke out early Monday morning at the Star Moving Picture Theatre. The flames from the theatre spread to a barber shop next door and the nearby Grand Union Hotel, destroying both places. All 12 guests at the hotel escaped the flames without injury, but lost all of their personal effects. One fireman narrowly escaped injury by jumping from a ladder to a balcony when a cornice against which the ladder was placed, fell.

The Review, December 24, 1897 – VANKLEEK HILL – A concert under the auspices of the Royal Templars of Temperance will be given at the Town Hall in Vankleek Hill on New Year’s night, 1898. Mr. Giles, the popular singer from Lachute, Québec, has consented to take part and others from a distance are expected. Admission – Children 10 cents, Adults 25 cents, Reserved seats 25 cents.