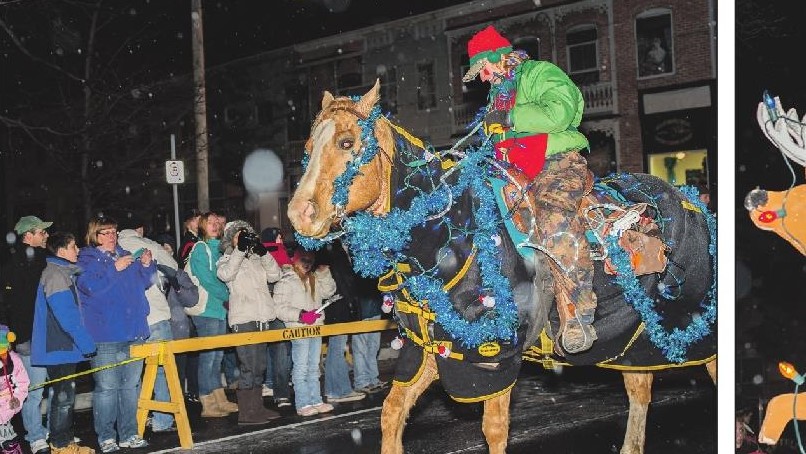 Photo from the 2012 Vankleek Hill Parade of Lights, which until last week was the biggest one ever held in the village. Photo from the December 14, 2012, edition of The Review.

The Review, December 19, 2012 – HAWKESBURY – The love parents and students have for École Sainte-Marguerite-Bourgeois was not enough to convince the Conseil scolaire de district catholique de l’Est ontarien (CSDCEO) to keep the school open.  Only two weeks after parents made an emotional plea to trustees, the board handed down its decision. At a meeting in November, Hawkesbury-area trustee André-Paul Lalonde told parents the closing was inevitable. Monique Smith, who spearheaded a campaign to save the school, said parents were angry, sad and disappointed with the board’s decision.

The Review, December 23, 1997 – HAWKESBURY – The Loblaws food chain is proceeding with plans to build a new supermarket on Highway 17, beside the Zellers department store. Loblaws has submitted preliminary plans to the Town of Hawkesbury. Before construction can begin, the land must be rezoned. A key condition is that Loblaws must produce a marketing study showing that the new store will not have a negative impact on Hawkesbury’s downtown core.

The Review, December 13, 1972 – VANKLEEK HILL – Mr. W. Kothe of Kothe’s Hardware and Décor has bought the property on which the R. A. Beamish Store #33 has operated for years. He will be renovating the building interior and anticipates opening a Stedman franchise store in February of 1973. The Beamish store closes permanently on December 30, 1972. Stedman’s is part of a large international corporation, with 100 company stores and 230 franchised stores in all 10 Canadian provinces.

Motorists should hand signal, even in winter

The Review, December 15, 1922 – RUSSELL – A Russell man has been fined for misuse of a party line telephone. On October 18, two farming brothers, Albert and Joseph Labelle, were talking business on a party line that has nine other subscribers, when Adrian Laplante, also a farmer, took off his receiver and after listening for a time, started to sing and otherwise prevent the brothers from talking. Magistrate Fraser found Laplante guilty and said he had been practicing a form of abuse too much in existence these days. The magistrate also referred to the evil of people who listen in on party-line telephones.

The Review, December 17, 1897 – L’ORIGNAL – The session of county court in L’Orignal this week, the county buildings were condemned by the Grand Jury. They found the courthouse in bad repair and ended with “we recommend that new buildings be erected in the near future”, to which County Crown Attorney Maxwell facetiously added “at Vankleek Hill”. Although probably a joke, Mr. Maxwell’s suggestion that the new buildings should be erected at Vankleek Hill is pertinent and we confidently believe will meet with the approval of three-fourths of the electors of the United Counties.