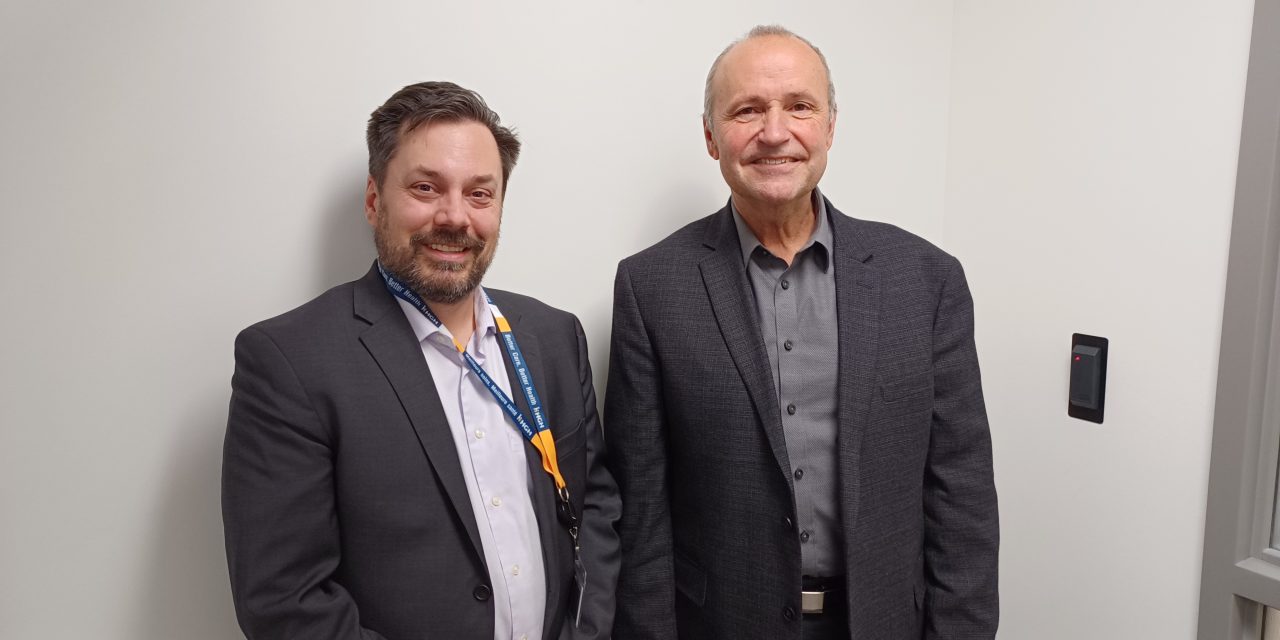 Hawkesbury and District General Hospital (HGH) has a new Chief Executive Officer (CEO), and a new Chair of its Board of Directors, and both are managing the challenges facing local health care.

Frédéric Beauchemin became the CEO of HGH in September 2022 following nearly 25 years in administration at The Ottawa Hospital (Civic, General, Riverside), and the Elisabeth Bruyère Hospital in Ottawa.

Beauchemin is overseeing HGH at a time when hospital emergency departments across the country are seeing increased visits, due to higher rates of respiratory viruses in children, coupled with a shortage of staff – particularly in nursing.

“This started before the pandemic,” Beauchemin said of the labour shortage.

He believes the pandemic has accelerated the problem.

Staff vacancies range from 15 to 18 percent

Beauchemin estimated that staff vacancies at HGH range from 15 to 18 per cent, depending on the department. The hospital has about 750 employees and 200 physicians. He said there are fewer challenges with physician retention than with nursing positions. Beauchemin said more operating room time is available for physicians at HGH than in larger centres, and that factor makes it easier to retain doctors to work there.

“It’s a worker’s market,” was how Beauchemin described the current situation in health care.

Beauchemin described the front door of the hospital as where staff are recruited, and the back door is where they are retained as employees. He said HGH is attempting to attract and retain staff by offering training to allow them to advance their skills and health care careers and establish loyalty among the facility’s work force.

HGH is providing incentives to attract and retain employees. Beauchemin described those as incentives to take more shifts, which include making employees eligible to enter weekly draws for prizes. The hospital administration is encouraging its employees to be flexible with their schedules.

“There’s been a lot of engagement on the nursing side and on the medical side,” Yelle said.

HGH has not offered signing bonuses to new nursing staff in the past. Recent provincial legislation known as Bill 124, which has limited public sector wage increases, has prohibited signing bonuses. However, on November 29, the Ontario Superior Court of Justice ruled the law was unconstitutional.

Beauchemin acknowledged there has been an increase in emergency department visits lately at HGH, but no significant increase in admissions resulting from those visits.

“I think the majority of the load we’re seeing is in urban centres,” Beauchemin said.

Unlike other hospitals across Ontario, HGH has not had to temporarily close its emergency department due to a shortage of personnel. Beauchemin said at HGH, they have managed – so far – to find the balance needed to keep the facility properly staffed.

Beauchemin and Yelle want to take a more proactive, rather than reactive approach to how HGH communicates with the community.

“I joined the board here because it’s a very good cause,” Yelle said.

Beauchemin said he accepted the position of CEO at HGH because he wanted to connect with smaller communities.

“It’s looking at where we want to go as an organization,” he said.

HGH began to position itself as a full-service regional hospital during the completion of its recently completed $200 million redevelopment project.

“We’re the hospital for Prescott and Russell,” Beauchemin said.

He acknowledged that many of HGH’s patients are from Québec, because they find the facility more convenient and efficient than hospitals in that province.

“Our purpose is serving the community,” said Beauchemin, adding he realizes that community goes beyond the boundaries of Prescott and Russell counties.

“We were not on time, but we were on budget,” he remarked.

The major challenged encountered during the redevelopment process was that the contractor went bankrupt. A new contractor had to be found and significant negotiations were necessary. Yelle said efforts to keep the project going were successful.

“I think there was some very good work done by the previous administration,” he said.