Self-serve, yes–but help is there if you need it 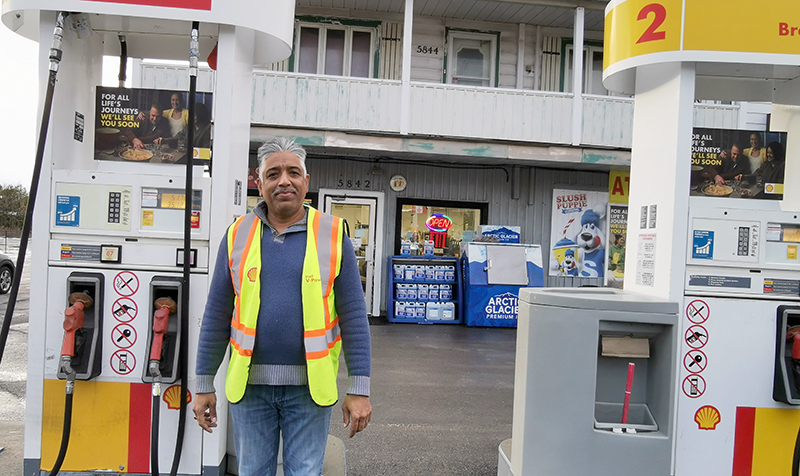 Despite the change to a self-serve gas station, Iftikhar Ahmad says he and his staff will help those who have mobility challenges to fill up their cars with gas. “We have four or five people that we know need help,” Ahmad says. Photo: Louise Sproule

This is a story about a big change at a small business and how that business is trying to serve everyone.

When we received a message of concern from a Vankleek Hill resident about the Pak Petroleum Inc. (formerly Martin’s Tire Shop) changing to self-serve after being a full-service gas station for decades, we thought we would stop in to find out more from owner Iftikhar Ahmad.

After speaking with Ahmad, the story changed.

“If people need help, of course we will go out to help them,” Ahmad said without hesitation, adding that he and his staff were already doing so and helping those who need it.

Ahmad, who is on duty himself on Wednesdays and Fridays, says that he cannot afford to pay two full-time people to work at the station and in the convenience store seven days a week. He acknowledged that shoplifting has been a problem if there is only one person on duty and that person spends much of the day outside pumping gas. With the additional in-store products and the convenience store now open, it just wasn’t practical, he said.

In addition to the move to self-serve, Ahmad has other plans in the works. Subsequent to the renovations to create a convenience store, offering hot coffee, snack foods and some household and other items, he will be adding M & M foods to his freezer section soon. A hot dog machine, a milkshake machine and a cappuccino machine will be installed in the days to come.

As far as the exterior gas pumps go, he wants to increase the space in between the existing pumps to permit four vehicles at a time and will have a roof installed over the gas pump area.

He is enthusiastic about serving the community and upping his game at the convenience store.

“The people here are great and we want to offer what people need,” Ahmad said. This short interview took place in between customers who were in and out of the store, paying for gas and other items. Mid-afternoon on Friday seemed to be a busy time at the store.

Staying competititve matters and his ongoing renovations are a part of that. As an example, he said it cost $4,000 just to change the door at the entrance of the store to open outward instead of inward. But he is committed to doing everything right, he says.

In the meantime, signs have been installed in the convenience store window, inviting those who need assistance at the pumps to call 613-678-2005 if they need help. Ahmad smiles. “I paid extra to keep that number because I know it has been the same telephone number here for years.”

The gas station and convenience store are open seven days per week, from 6 a.m. to 8 p.m.