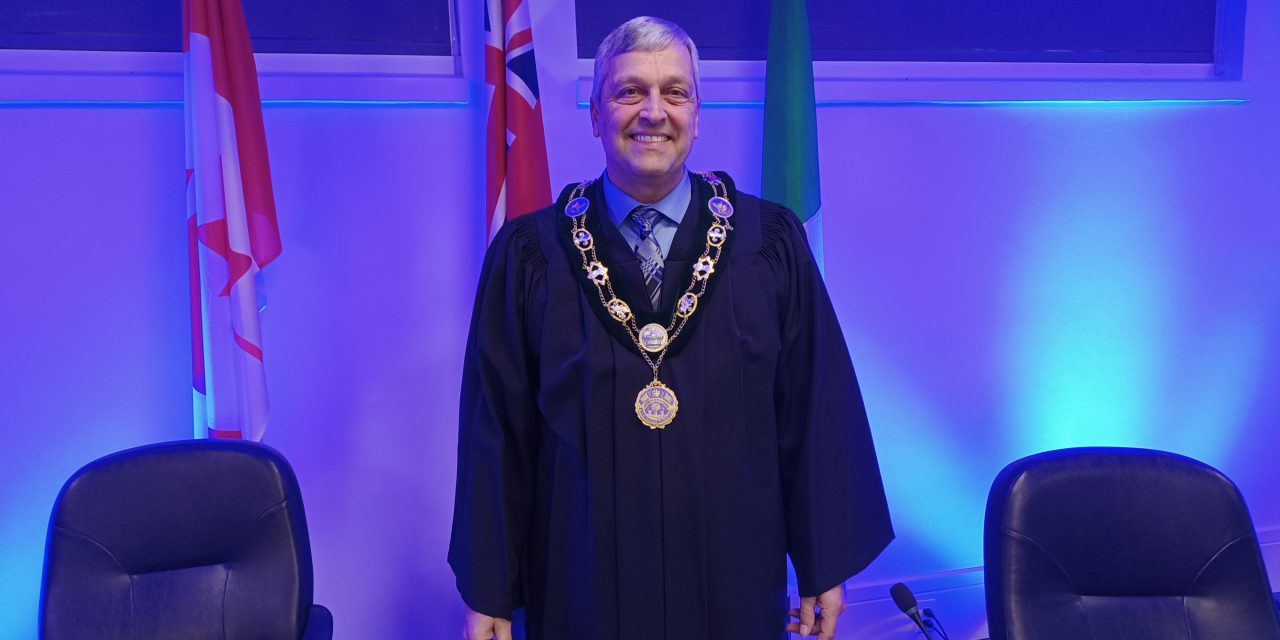 Champlain Township Mayor Normand Riopel is the 2023 Warden of the United Counties of Prescott and Russell. Photo: James Morgan

The Mayor of Champlain Township is the 2023 Warden of the United Counties of Prescott and Russell (UCPR).

Normand Riopel was sworn in at the inaugural meeting held at the UCPR administration building in L’Orignal on November 23.

Riopel, who was elected to his second term as mayor on October 24, was acclaimed warden.

Seven of the mayors were also sworn in as council members for the 2022 to 2026 term. Laviolette was unable to attend the inaugural meeting.

UCPR mayors who comprised the former 2018 to 2022 council had selected Riopel as warden on November 16. No other mayors submitted nominations for the position. Russell Township Mayor Pierre Leroux nominated Riopel, and the nomination was seconded by East Hawkesbury Mayor Robert Kirby.

“Your knowledge and mastery of regional issues will make you an exceptional warden,” Leroux said.

Kirby described Riopel as a hard worker and a thinker.

“The decision to support your candidacy was very easy,” said Kirby.

In his inaugural address, Riopel thanked Leroux and Kirby for their support, and for 2022 Warden Daniel Lafleur for ensuring a smooth transition of responsibilities. He also thanked his wife Frances, their daughter and son, and three grandchildren for their support. The new warden identified a few priorities for the months ahead, beginning with the 2023 UCPR budget.

He acknowledged the budget process will be challenging because of the current inflationary economy but believes the challenge can be met. Later in the meeting, council approved the timetable for the development and approval of the budget. Drafts of the UCPR’s spending plans for the year ahead will be presented to council on November 30, December 7, and December 14 with the goal of final approval on January 11.

“I am also committed to making road safety a priority,” remarked Riopel.

“I am receiving an increasing number of complaints about unsafe driving,” he said.

Weighing in on weighted votes

Another significant priority Riopel identified is to review the weighted vote formula currently used by UCPR council. Council agreed it is time to take a look at formula.

“The present system of weighted votes does not reflect the demographics of the region,” Riopel said.

The current UCPR by-law assigns one weighted vote per 3,000 registered voters in each municipality. Currently, there are 29 votes allocated among the eight municipalities. The by-law also requires the formula be reviewed following each election. UCPR council is not directly elected by voters, but each mayor automatically becomes the representative of their municipality.

At the inaugural meeting, council agreed it will review the weighted vote formula.

“This is a political issue and will be discussed at a future meeting,” remarked Chief Administrative Officer Stéphane Parisien.

In his inaugural remarks, Riopel also committed to seeing the completion of the new Prescott and Russell Residence and improving access to natural gas across the UCPR.

In its first human resources decision of the new term, UCPR council formally appointed Jérémie Bouchard as the regional government’s Director of Public Works on November 23. Bouchard had been serving as the acting director for more than a year due to the prolonged illness of former director Marc Clermont, who died on September 12. Parisien said it was appropriate to formally appoint Bouchard at the inaugural meeting.

“I thought it was timely tonight to appoint him and remove his title of Acting Director of Public Works,” commented Parisien.