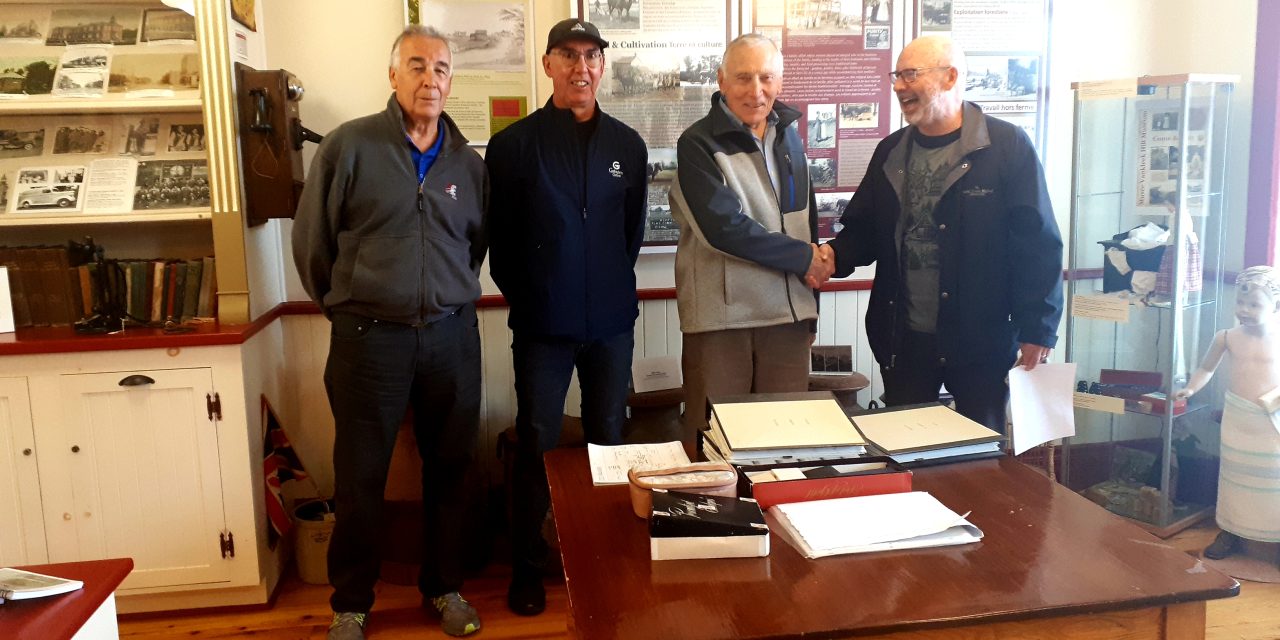 At the Vankleek Hill Museum, the Milner brothers (left to right): Emmett, Guy, and Tom, who is shaking hands with Historical Society director Harvey LeRoy. They are deeply committed to commemorating the memory of their uncles, whom they never met. They welcomed the news that the Habitations Robert housing development will include the new Milner Street. Photo: Michelle Landriault, Vankleek Hill Museum

The Milner Family has donated to the Vankleek Hill Museum, the military records and the World War II military medals awarded posthumously to three of their uncles: Emmett, Guy and Evan Milner – three brothers who served with the Royal Canadian Air Force and Royal Air Force during WWII. All three were Killed in Action.

The names of the three Milner brothers can be found on the modest family tombstone in St-Grégoire Catholic Cemetery. Their names also appear on the Vankleek Hill War Memorial, located on Main Street East, where everyone can join the Royal Canadian Legion #472 to mark Remembrance Day on Sunday November 6 at 2 p.m.

Amongst the medals are three Silver Memorial Cross decorations awarded to their grandmother, Margaret Milner – who lost three of her sons. Her three sons died in air combat within seven months of each other: Guy Milner in June of 1943; Emmett Milner in September of 1943; and Evan Milner in January of 1944.

Each story of a war veteran is a story of courage. The deaths of children in combat service are a particularly heavy loss for a family to suffer. Imagine how such tragic events can badly affect, even break, the normal course of family life. Think of the courage needed to move ahead in life, to make every day count, to live with the need to never forget.

At Remembrance Day ceremonies, we invest our time to reflect on the courage, the loss and the suffering of those engaged in battle.

Remembrance Day also provides the opportunity to think of Margaret and Tom Milner, and the other parents, who had to survive the anguish of the loss of their child, or of their children in battle. Children who were buried near their battlefields, far from home.

The farm of Thomas and Margaret (McDonnell) Milner is on the north side of Pleasant Corners Road. Their neighbor, the late Jack Mooney, recalled as a young man in his 20s on a summer day in 1943 seeing the taxi from Vankleek Hill slowly going up the long Milner farm driveway to deliver to the parents the official telegram reporting Guy’s death. Imagine Margaret in her kitchen, hearing the slow shifting of the driveway gravel as the wheels of the taxi grinded closer and closer.

“That’s how it was done,” Jack said. “A telegram would arrive in Vankleek Hill, and a taxi driver would deliver the news to the family.”

It was to be the first of three terrifying taxi arrivals at the Milner Farm that took place within a seven-month period.