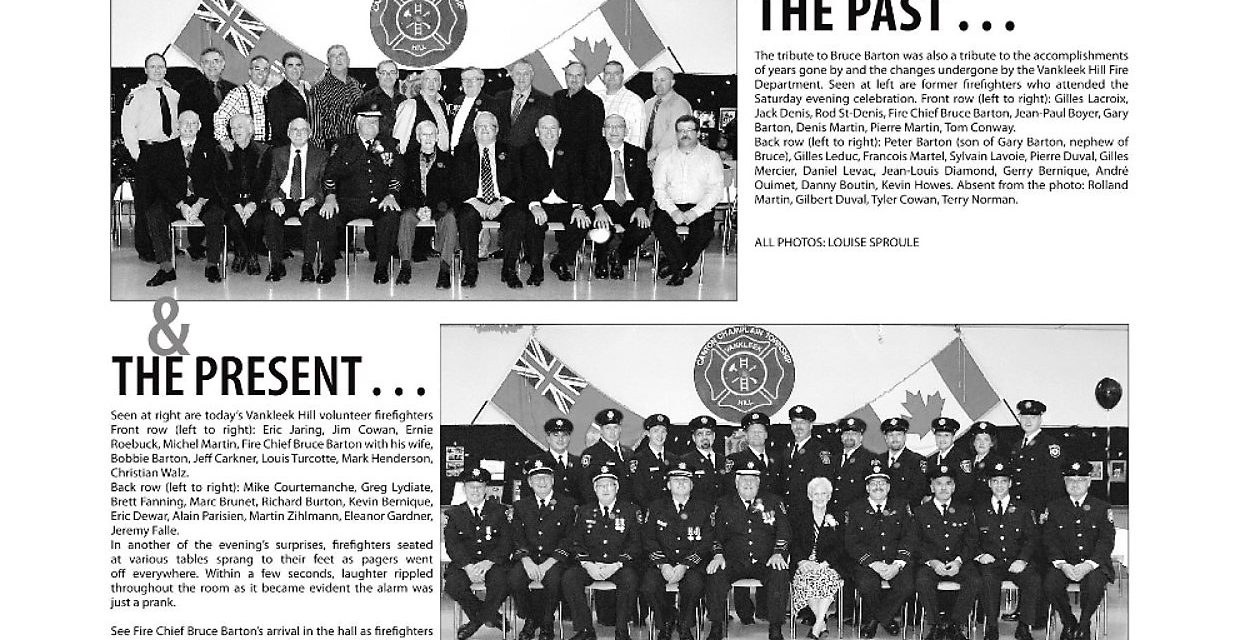 Former and current firefighters from the Vankleek Hill Fire Department gathered to celebrate the retirement of longtime Fire Chief Bruce Barton in this clipping from the November 7, 2012, issue of The Review. Photos: Review Archives

The Review, November 7, 2012 – HAWKESBURY – Though there is some confusion about where it originated, there is no doubt an earthquake shook residents across the region awake when it rumbled through at around 4:04 a.m. on Tuesday, November 6. Residents of Hawkesbury, Vankleek Hill and L’Orignal took to The Review’s Facebook page early Tuesday morning to report intense shaking, loud rumbling, and in some instances, objects falling off walls and shelves. The quake was centered near Buckingham, Québec and was measured at a magnitude of 4.2. While magnitude 4.2 is big, it is not nearly as big as the magnitude 5.0 that hit the region in June of 2010.

Amoco to lay off 35 workers

The Review, November 5, 1997 – HAWKESBURY – Amoco Fabrics and Fibers will lay off 35 production workers and reduce office staff under a downsizing program at the Hawkesbury plant. The layoffs are no surprise. The carpet backing maker has been struggling to cope with slumping sales and was forced to shut down this summer.

The Review, November 1, 1972 – VANKLEEK HILL – Gordon Allen of Elm Lane Farm in Vankleek Hill took the Grand Champion Award in the aged cow class at the Ottawa Championship Holstein Show with his entry, Elm Lane Dynamo Peggy, who also took first place for Female 5 years and over. At the Eastern Ontario 4-H Championship Show in Ottawa, Bruce Mode won the Grand Champion Ayrshire calf with his entry Bonnie Brae Cora. As a 4-H member of Prescott County, Bruce has captured many high awards with his entries in recent years.

The Review, November 6, 1947 – LOCHIEL – By a majority of only 19 votes, residents of Lochiel Township on October 29 approved the sale of beer and wine in their community, after a 35-year dry spell. A total of 1,030 residents of the township were in favour of the repeal, which 856 voted against. Sixty per cent of the votes was required in order to make the repeal effective. In a June plebiscite, residents turned down the question of women’s beverage rooms by a substantial majority.

The Review, November 3, 1922 – VANKLEEK HILL – Local cheese makers were pleased when cheese touched the record price of the season on the Cornwall Board on Saturday, when 257 white and 667 colored sold at 20-3/4 cents. The only other time local cheese sold near this price this season was on June 24, when 18-1/8 and 18-2/3 was paid.

The Review, November 5, 1897 – HAWKESBURY – There has been considerable talk and agitation recently for a new steam fire engine for Hawkesbury and no doubt there is good cause, as the present fire appliances are quite inadequate for the requirements of the town. It is to be hoped that council will act promptly and that they make a proper choice, as this would have the effect of largely decreasing the insurance fees, which are extremely high.