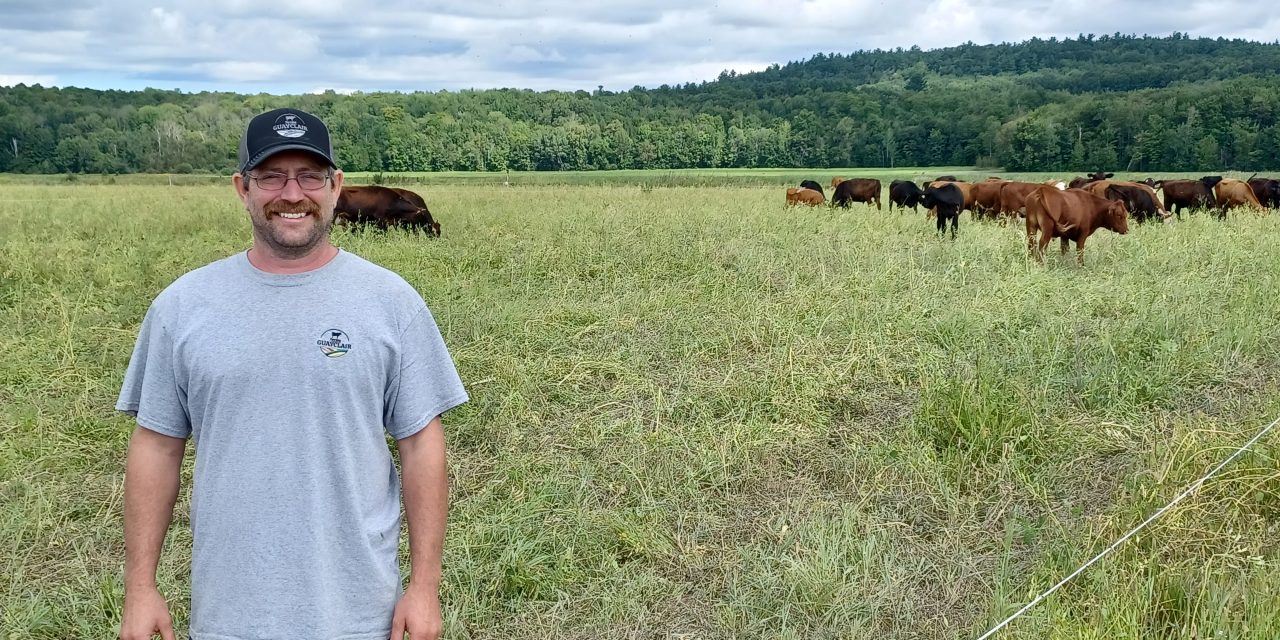 Things are done a bit differently at Ferme Guayclair in Brownsburg-Chatham. The steaks and roasts found in most supermarkets these days were raised on feedlots, but at Ferme Guayclair the cattle are out in pastures planted with regenerative cover crops.

Ferme Guayclair has been owned by the Guay family for three generations and owner Stéphane Guay is a seventh-generation farmer. The farm – located on Montée la Branche between Brownsburg and Autoroute 50 – has been in the Guay family since 1952, when his grandfather Ronald Guay purchased the property. In 1977, Stéphane’s parents, Marcel and Marie-Claire, purchased the farm. Stéphane took it over in 2004. Until 2018, it was a dairy farm, but an injury led Stéphane to switch to beef.

“I loved the cattle, so I decided to go into beef production,” he commented.

That switch to beef also led Guay to change his farming methods.

He said letting cattle graze rather than be fed something else makes sense.

“As far as I know, a cow is a ruminant,” Guay wryly commented.

All of the cattle at Ferme Guayclair are out to pasture from May to December. Guay says it is better for animal welfare, and for the quality of the meat.

The fields and pastures of Ferme Guayclair’s 410 acres are planted with no-till cover crops, sunflowers, oats, and peas. The vegetation from the crops helps maintain and replenish nitrogen in the soil without utilizing fertilizers.

When cattle are always out grazing, their manure also adds nutrients to the soil.

Guay has been using the regenerative, no-till methods for two years and already notices improvements in the quality of the soil.

“I can see there’s sure life in the soil,” commented Guay.

Those improvements include more worms, more insects – including butterflies – fluttering over the pastures. Indeed, monarch butterflies are a common sight in early August on Ferme Guayclair’s pastures. Guay said the increase of worms and insects also improves bird habitat, and the birds eat flies off of cattle.

Guay said his decision to use regenerative methods was made after losing 30 per cent of the organic matter in the soil on the farm.

Ferme Guayclair has recently been the focus of recognition in the community, and in agriculture across Québec and Canada. 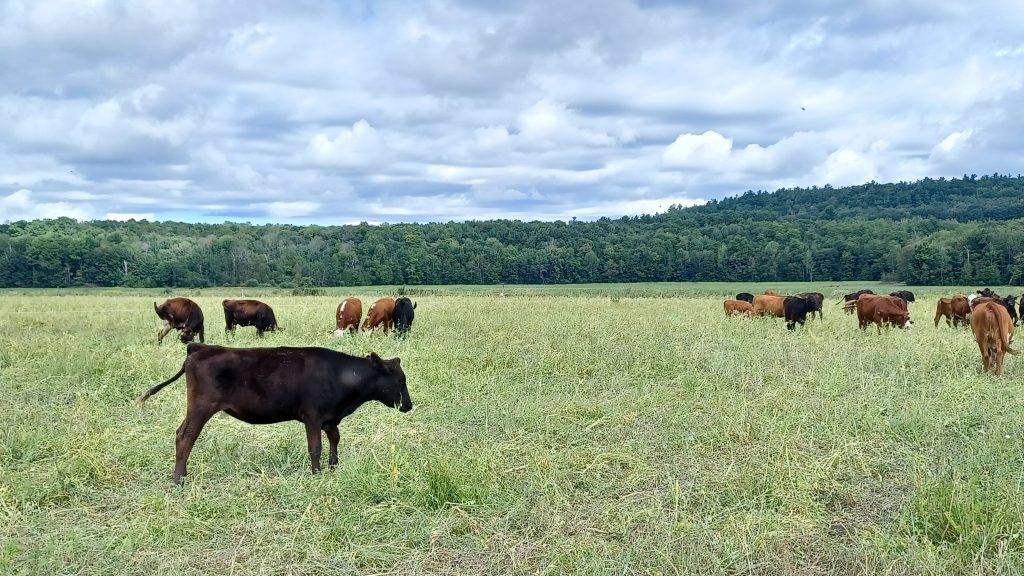 On July 23, the Brownsburg-Chatham public market was held at the farm and around 800 people attended the open house to learn about regenerative agriculture, which was presented in partnership with the Union des producteurs agricoles (UPA), the largest farmer’s organization in Québec.

“I wanted to make that day good for everyone in the area,” said Guay.

He emphasized how having the market made local food shopping easily accessible for everyone.

Ferme Guayclair is the winner of The Environmental Stewardship Award for Québec from the Canadian Cattle Association for 2022. The farm was a finalist for this year’s national award. Ferme Guayclair also won the 2022 award for sustainable development from the Chambre du commerce et de l’industrie d’Argenteuil (CCIA). The farm was also a finalist for two other CCIA awards in 2022.

“It’s been a big year for Ferme Guayclair,” Guay said.

Another community contribution of Ferme Guayclair is the Food Forest project. Located on the eastern side of the property, fruit and nut trees, raspberry plants, and other items were planted two years ago. Once they begin to produce fruits and nuts, the items will be available for the community, separately from the farm business.

Ferme Guyclair has a shop located on site where their meat is sold. The shop is only open on Saturdays or by appointment. The farm is located at 235 Montée la Branche in Brownsburg-Chatham. To shop online or make an inquiry, go to fermeguayclair.com or call 514-705-9902. 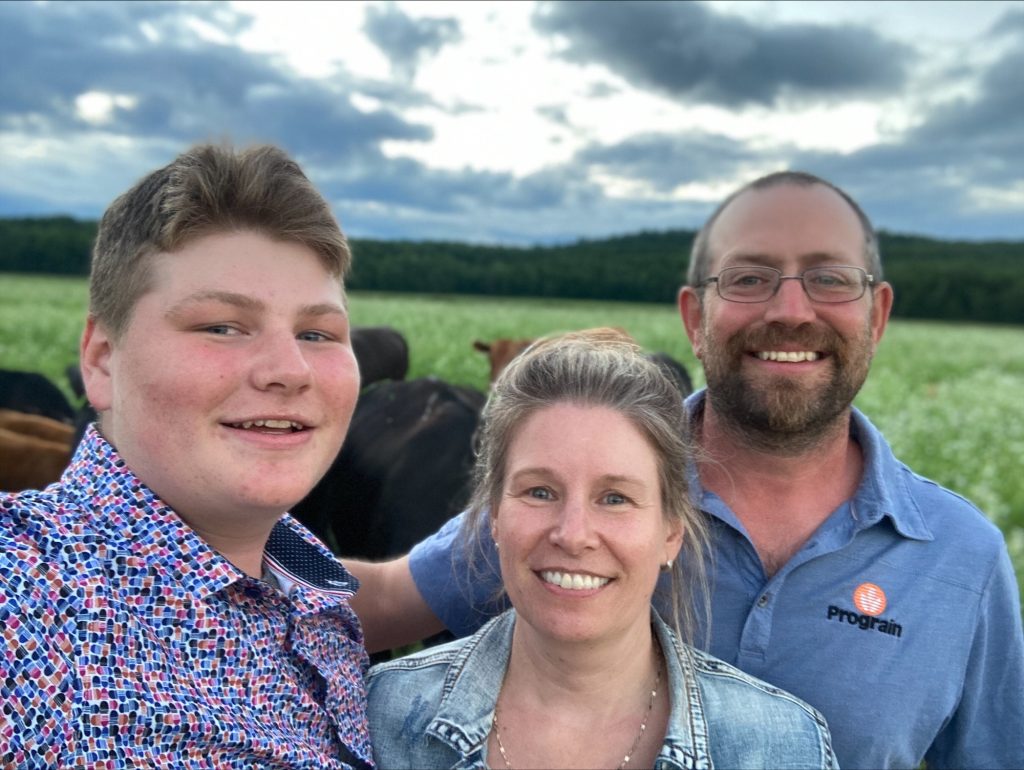