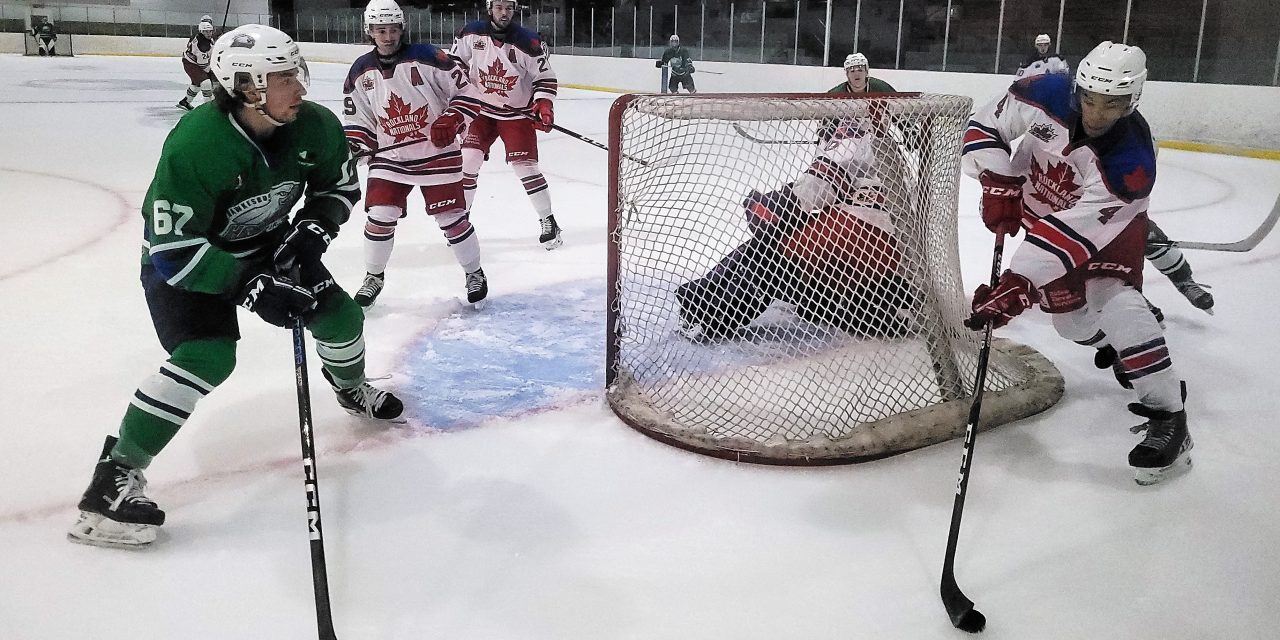 Collision Course: Hawkesbury’s Nathan Gagne (67) gets ready to lay a hit on Rockland’s Xavier Laurent (4) as he plays the puck behind his own net during Hawkesbury’s 3-2 opening night win last Friday, September 23. Photo: Reid Masson

It’s just the beginning of the Central Canada Hockey League (CCHL) season, but the Hawkesbury Hawks and Rockland Nationals appeared to be already in playoff mode, as they split back-to-back overtime games last weekend.

Hawkesbury drew first blood in the home-and-home series on Friday, September 23, with Felix Sauvé playing the hero’s role by scoring the winner at 2:49 into overtime with an assist from Antoine Dorion, who had tied up the game at 2-2 with just under a minute left in the second period.

Jeremy Tremblay also scored for the Hawks, while Kellen Dostaler and Nicolas White replied for Rockland in front of the opening night crowd at Hawkesbury’s Robert Hartley Sports Complex. Hawks netminder Dimitri Pelekos stopped 28 of the 30 shots he faced to earn the win, while Hadyn Gould took the loss in the Rockland net.

On Saturday, September 24, it was Rockland’s turn to provide extra time heroics, with captain Yannick Crête and Patrick Lanthier each scoring in the shootout to power the Nationals to a 2-1 victory in the team’s home opener at the Rockland Arena. Landon Brownlee scored for Hawkesbury in the first period to stake the Hawks to a 1-0 lead, before Zach Power replied for the Nationals to tie up the game.

Dekon Randell-Snow took the shootout loss in the Hawkesbury net, despite a fine performance that saw him stop 36 of 37 Rockland shots fired his way. Gould got the win for Rockland, stopping 33 of 34 shots.

Making his debut behind the Hawkesbury bench was Charles Lavigne, who left the Nationals’ general manager position to become head coach of the Hawks just a few weeks ago. The new Hawkesbury coach said he was pleased with all facets of his squad’s play on the weekend and was impressed by both teams.

“I think there was a lot of nervous energy on both sides and oddly enough there was a playoff-type atmosphere put forth by both teams.” Lavigne said. “It was a great way to start the season.”

The Hawks head coach was happy with all areas of his team’s play, particularly up front, where all four lines put pressure on the Nationals defense.

“I’m very impressed with all four of our lines,” Lavigne said, adding he thought the team’s defense and goaltending also shined over the weekend. “I liked everybody’s game, to be honest.”

There was a worry that Hawkesbury’s inexperienced defense would be a weak spot going into the season, but allowing only three goals in two games helped to ease those concerns. The defensive performance was a total team effort, the team’s head coach said.

“We have to give a lot of praise to all seven defenseman that played,” Lavigne said. “But I have to give props as well to our forwards, who came back and supported our defense very well.”

“I’m very happy with how our defensemen and our forwards are buying in to play as a unit right now. It’s going to pay dividends in the long run – as long as we stick to the plan.”

The Hawks will be at home this Friday, September 30, at the Robert Hartley Sports complex to face the Nepean Raiders. Game time is 7:30 p.m. 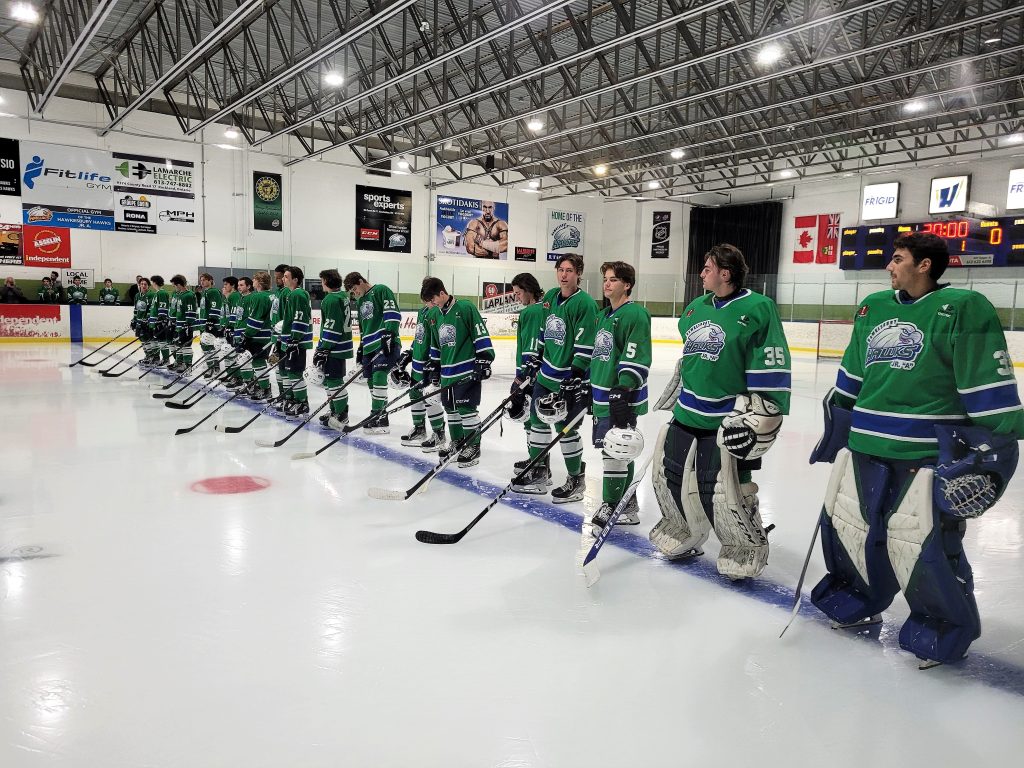 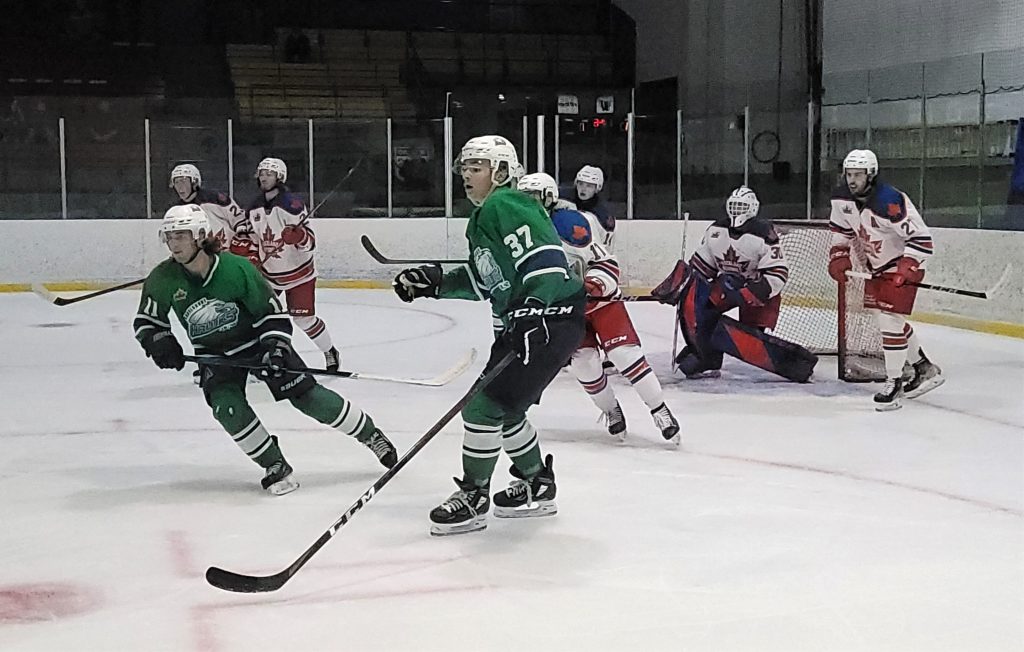 Hawkesbury forward Antoine Dorion (37) scored the tying goal in Friday night’s game against Rockland with under a minute left in the second period and later assisted on the winning overtime goal. Photo: Reid Masson