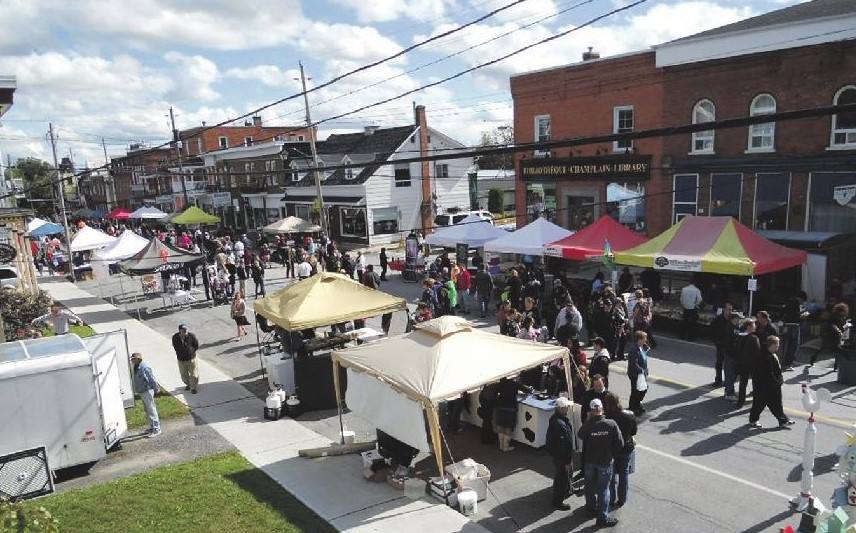 Brenda St. James took this overview of the 2012 Festival of Flavours in Vankleek Hill. It was a cool, but sunny day and thousands of people came out to taste a variety of delectable dishes. Photo: Review Archives

The Review, September 26, 2012 – VANKLEEK HILL – Not in my back yard. That is probably most people’s response when they hear the words “drug rehab centre”. But proponents of a drug rehabilitation facility in Vankleek Hill’s historic convent say times have changed. Fondation L’Ange Gardien will be presenting their plan to Champlain Township council on October 10.

The Review, October 1, 1997 – HAWKESBURY – “Are you in favour of the installation of water meters in the town of Hawkesbury?” That hot question will be on the ballot when town voters choose a new municipal council on October 10. Although the majority of current council members support the installation of meters, council voted to hold a plebiscite on the question, which has become a torrid election issue.

The Review, September 27, 1972 – HAWKESBURY – Sinclair Supply Company Ltd. of Vankleek Hill has undertaken two major industrial expansion projects in Hawkesbury. The $4 million Patchogue-Plymouth plant expansion, to be completed by March of 1973, will enlarge the area by 94,000 square feet and create some 45 new jobs. Fibre World Ltd., has also awarded Sinclair Supply a $350,000 contract for a 60,000-square-foot plant expansion that will create an additional 40 jobs.

The Review, September 25, 1947 – VANKLEEK HILL – School has again opened for the autumn term and in order to keep our boys and girls healthy and happy, the Red Cross will provide cod liver oil free to all the schools in this district. Please call the Bank Canadian Nationale and receive your supply, which will build up a resistance for the rigors of the coming winter. Remember, the cod liver oil is free to the school for the asking.

Whose roads are these?

The Review, September 29, 1922 – VANKLEEK HILL – No load beyond a certain width is to be permitted upon provincial roadways. Farmers have been warned that their cattle must not be allowed at large upon these same roads, a restriction which means that cattle must be kept off adjacent thoroughfares as well, since otherwise they would stray from one another. It is probably only a matter of time until restraint is made still more stringent and the prohibition extended even to the driving of cattle on what by courtesy are still called “highways”. When farmers thus find themselves under compulsion to adjust by footrule the loads they may haul past their own doors they will not unnaturally begin to ask themselves if roads, which their grandfathers cut out of forests, have been taken wholly out of their control and are no longer for their benefit.

The Review, September 24, 1897 – VANKLEEK HILL – On Wednesday night an attempt was made to enter Mr. J.S. McIntosh’s store on High Street, but the culprit was detected trying to force the doors. Mr. Donald McInnes was returning from a social gathering, mounted on his noiseless steed, when he noticed the burglar at work and challenged him, whereupon said burglar took to his heels and disappeared down the street before Mr. McInnes fully realized what was taking place. Mr. McInnes aroused Mr. Huntington, a clerk in the store and together they found the outer storm doors had been forced open. After fastening the doors, the two patrolled the town for a couple of hours. Strange to say in the morning the outside doors were again found forced open which showed a second attempt had been made to enter the store. Mr. McIntosh must have a very desirable line of goods, when two attempts are made in one night to get some of them.