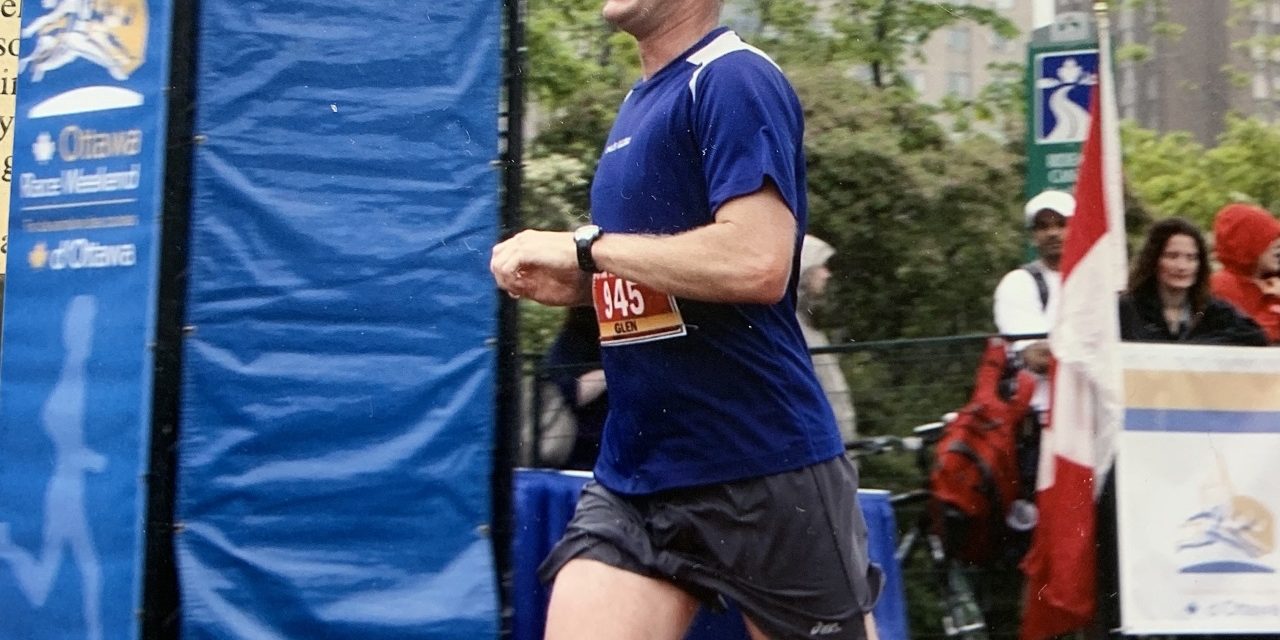 Glen Campbell crossing the finish line at a past Ottawa Marathon. Campbell is one of the 2022 inductees into the Glengarry Sports Hall of Fame. Submitted photo

Glen Campbell is being inducted into the Glengarry Sports Hall of Fame on August 17.

Campbell is no stranger to the Glengarry sporting landscape. His athletic journey started at a very young age and he continues to serve as an inspiration and role model to young and not so young athletes in Glengarry. Born in Montreal in 1969 to parents Sheila and the late Donald Campbell, the family moved to Glen Nevis in 1977 where Glen continues to reside in the family home.

It didn’t take long for Campbell to become active and play the minor sports offered in his community. He played on teams with the Minor Hockey Association, the Glengarry Soccer League and the North Lancaster minor league softball.

At age 16, Glen became a member of the Alexandria Jr. B Glens and stayed with the team until age 21. During this time, Glen captained the team for three seasons, won three MVP team honours and won the League MVP in 1990.  The Glens won the division on three occasions and twice went to the Eastern Ontario Finals. Former coach and Glengarry Sports Hall of Fame member Roch Lajoie recalls that,

“Glen came from a championship Midget team to the Junior B Glens. I had the privilege to be his coach as he came with natural leadership qualities and had a natural
scoring talent…Glen’s team spirit helped the Glens to be the best they could be. He gave 100 per cent all the time, which he continues to give in his community and profession.”

Campbell played varsity hockey with the Concordia Stingers for a portion of one season before committing full time to the university’s soccer program. He holds a true passion for the game of soccer. Campbell played minor soccer in the Glengarry Soccer League (GSL) and played on the Glen Nevis Senior Men’s team for over 20 years, and some of that time with the old timers division. The team went on to win three league titles in the early 90’s.  Campbell won the league MVP six times. In 1995, Glen he served as Vice President for the GSL and served as area rep for Glen Nevis many years thereafter. For a period of five years, he was instrumental in organizing GSL soccer skills clinics and coaching clinics to promote the love of the game and develop the skills of young players and coaches. As a student at GDHS,

In his high school days, Campbell played for the senior boys’ soccer team and represented his school and community at OFSAA on three occasions. In 1991, he earned a spot on the Concordia University varsity soccer roster and played for the duration of his undergraduate degree. In 1993, Campbell was selected as the Concordia Stingers team captain and won team MVP. This same year he was named to the First All-star team within the province of Quebec. After graduating from Concordia, Campbelle furthered his education by obtaining his Bachelor’s degree in Education from Mount Allison University in Sackville New Brunswick, where he once again played varsity soccer.

Following his university years,  Campbell took up running, biking and triathlon.  He was no stranger to training on the back roads around Glen Nevis, often seen training with a small group of like-minded friends. He completed 25 marathons, including nine Boston Marathons and one Ironman distance triathlon. Glen achieved his personal best time in 2011 running the Ottawa Marathon at the age of 42. Amidst a dedicated training program for his running, Campbell also found time to play recreational flag football and softball for a number of years.