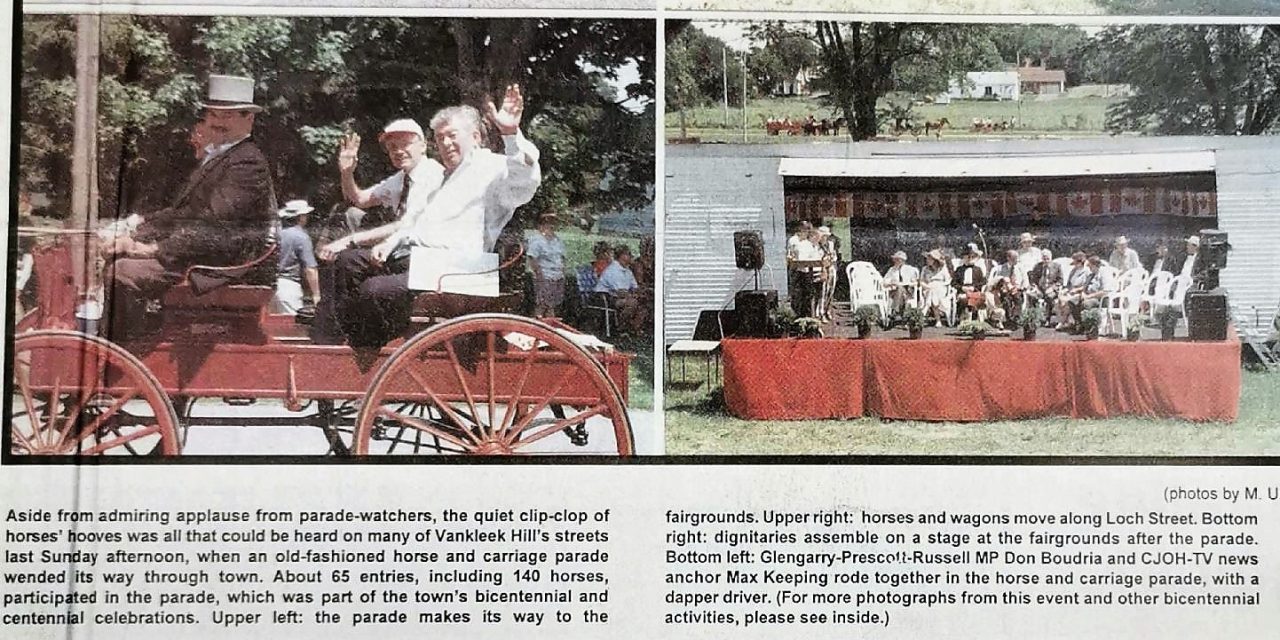 Photos and caption of the 1997 Horse and Buggy parage, which was part of Vankleek Hill’s 200th anniversary celebrations, from the July 5, 1997, edition of The Review. Photo: Review Archives

10 Years ago
First-ever Food Bank Jamboree features family format
The Review, July 4, 2012 – VANKLEEK HILL – The first-ever Vankleek Hill Food Bank Jamboree is set to take place on Saturday and a fun, family oriented format is at the heart of the event. The jamboree promises non-stop musical entertainment from noon until closing said Mike St-Denis, of the Windsor Tavern, which is hosting the event.

25 Years Ago
Tornado tears through region
The Review, July 2, 1997 – POINTE-FORTUNE – Residents are cleaning up after a tornado tore through the region last week, causing widespread damage. “It all happened in 14 seconds. It tore through here like a freight train,” said George Henderson, of the tornado that damaged about 80 trees, lifted three skylights and ripped tin off a barn roof on the family farm near Pointe-Fortune. “It sounded like a transport coming through the park,” said Derek Burger, a park warden at Voyageur Provincial Park. About 70 of the park’s campsites were occupied at the time, but fortunately no one was injured.

50 Years Ago
Hawkesbury Pipe Band No. 1 at Ottawa Highland Games
The Review, July , 1972 – HAWKESBURY – By Roberta Histed – You can imagine the excitement, Hats flew in the air, cheers resounded, and backs were thumped. The occasion was the first edition of the Ottawa Highland Games held at Landsdowne Park, which was a memorable day for the pipers and drummers of the 1st Hawkesbury Pipe Band. They won first prize in the Intermediate Pipe Band competition, in which there were 11 bands competing. Second prize went to the Glengarry Pipe Band of Maxville and third to the Ottawa Police Association band.

75 Years Ago
St-Eugène hanger needed for Hawkesbury
The Review, July 2, 1947 – HAWKESBURY – Will we have an arena? One thing certain is that Mr. Adrian Berthiaume, together with other people from our town, are still working at it. The big difficulty now is to buy hanger No. 1 at St-Eugène airport. The corporation in Montréal says it can’t sell it for now because Alexandria has an option on it. But we also know the town of Alexandria has already purchased a good part, not to say all the buildings in St-Eugène. We believe it reasonable that the people from Hawkesbury could have at least hangar No. 1 – what do you think folks?

100 Years Ago
No bull decision in property dispute
The Review, June 30, 1922 – VANKLEEK HILL – A case of much interest was heard in Council Chamber here on Tuesday between two neighbours, Messrs. Valley and McDuff. The trouble arose over the trespass of Valley’s bull, and his honor Judge O’Brien assessed $25 and costs against Valley, amounting to somewhere about $47.

125 Years Ago
Petition to change name of Rutherford train station
The Review, July 2, 1897 – BARB – A petition has been circulated and unanimously signed by the residents of the vicinity, asking the Canadian Pacific authorities to change the name of the train station at Rutherford to Barb, which is the post office for that district and is only a short distance from the station. They claim that by having the station the same name as the post office a great deal of confusion would be avoided and the public would know ‘ where they are at”.