Stories shared at ‘Together for Ukraine’, as families arrive in Vankleek Hill and Hawkesbury 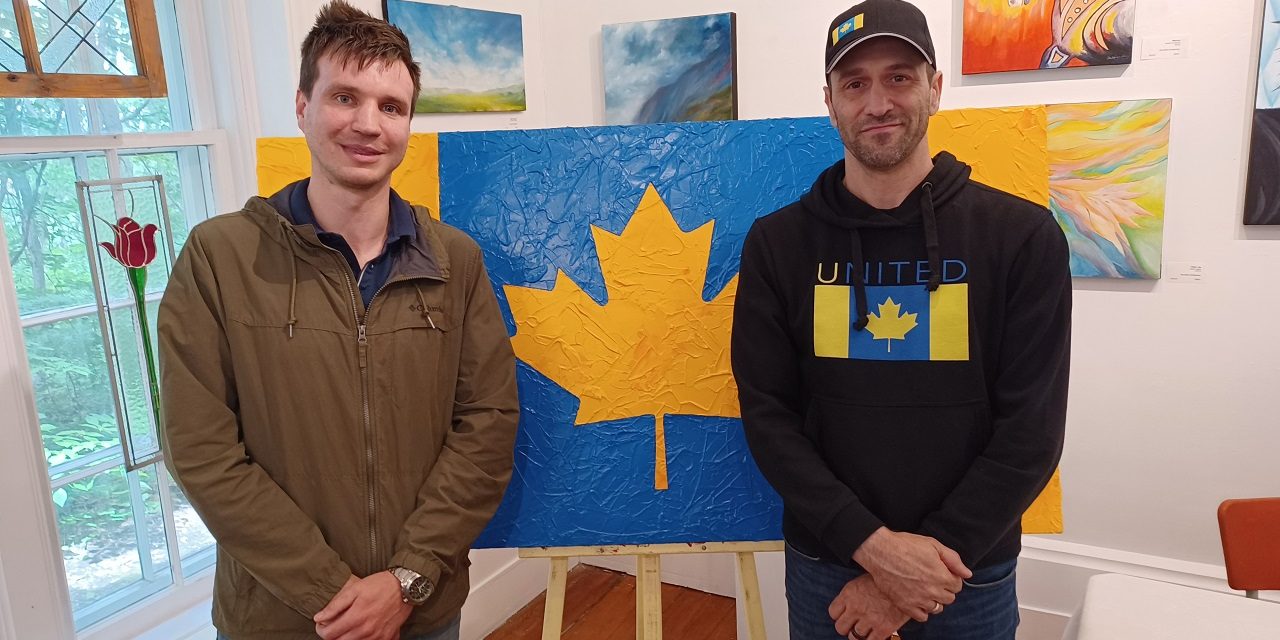 Dmytro Gordiienko, left, and Luc Chenier, right, spoke about the war in Ukraine at the Together for Ukraine event held at Arbor Gallery on June 4. Photo: James Morgan

Vankleek Hill was ‘Together for Ukraine’ at the Arbor Gallery last weekend (June 4-5).

‘Together for Ukraine’ was a collaboration of six local French-language Roman Catholic parishes, the Creating Centre, and the Arbor Gallery, who gathered at the site in Vankleek Hill to show support for Ukraine, as the country’s war against Russia continues to rage.

Luc Chénier, originally of Hawkesbury and now living in Alexandria, and Dmytro Gordiienko, a Ukrainian living in St-Eugène, shared their experiences with the conflict currently taking place in Ukraine.

Chénier was the Chief Executive Officer (CEO) of the Kyiv Post, an English-language newspaper in Ukraine’s capital city. He recalled Russia’s previous war with Ukraine in 2014. A graphic designer by training, Chénier created a Canadian flag in 2014 with the blue and yellow of the Ukrainian flag on it, instead of red and white. Since the present war began, he has been using the flag as a symbol of Canada’s solidarity with Ukraine.

When Russia annexed the Crimean Peninsula, Chénier said he was not afraid, or even sure, if Russia would again invade in 2022. However, Russia did invade on February 24 and Chénier, along with his Ukrainian wife and two daughters, began the arduous process of fleeing Kyiv and temporarily relocating to Hungary before finally travelling to Canada.

Chénier said the prospect of invasion seemed like a lot of bluffing at first. When he was informed journalists and foreigners were high on the hit list of people the invading Russians would detain, torture, and even kill, he planned to take his wife and daughters to Canada for what would have been a two-month vacation while the situation unfolded. However, he was shocked when the first explosions of Russian bombs occurred – forcing he and his family to flee instantly.

It took Chénier and his family five days just to get out of Ukraine due to the challenges of transportation, fuel shortages, the high cost of supplies, and the ever-present threat of danger. He was plagued with panic attacks and also faced the challenge of securing a supply of insulin to treat his diabetes. Chénier witnessed displaced people wandering along rural highways, carrying whatever few possessions they could bring with them.

“It was just creepy as hell, what was going on,” Chénier recalled.

Leaving created some difficult emotions. Chénier said he felt bad leaving friends behind in Ukraine. Eventually, he and his family were able to get to Budapest, the capital city of Hungary. There, they had difficulty securing visas for the family to travel to Canada. The Canadian government was initially slow to react as an increasing number of Ukrainians were beginning to show interest in going to Canada.

A story about Chénier’s situation appeared in the French-language newspaper La Presse. The potential public relations and political consequences forced the government to get organized. Chénier said the Minister of Immigration called him the day after the La Presse story was published, to inform him the visas were approved. Chenier sad he is pleased the government is now much more organized at helping Ukrainians resettle in Canada.

Chénier said the war with Russia has ironically given Ukrainian President Volodomyr Zelenskyy credibility as a promoter of democracy. According to Chénier, the president himself was becoming more dictatorial before the war, and increasingly persecuting political opponents and encroaching on freedom of the press. The Russian invasion has compelled him to defend freedom.

“It made him become the president he always should have been,” Chénier remarked.

Chénier believes Russian President Vladimir Putin is using the false accusation of Ukraine being full of Nazis as a propaganda ruse to stoke support, based on the great reverence Russians have toward the Soviet Union’s fight against the Nazis in World War II.

“They’re just inventing one lie after another lie,” Chénier said.

Dmytro Gordiienko has been in Canada for three years and works as a mechanical engineer on a dairy farm in St-Eugène. He described Putin as “greedy,” and “afraid.” He believes the Russian invasion was partly driven by resentment towards Ukraine having a better standard of living and economy than many Russians have.

Gordiienko’s mother was able to leave her home and get out of Ukraine. She is presently in Sofia, the capital of Bulgaria.

However, Gordiienko’s father remained in Ukraine.

Gordiienko spoke of the effect propaganda has on Russians. He said false information the Russian government presents as facts to its citizens include that Ukraine does not really exist and the whole idea of it was created by the United States.

Meanwhile, two families from Ukraine have arrived in the area. Andrii Chornokulskyi and his family are settling into a home in Vankleek Hill provided for them by the Vankleek Hill Baptist Church.

“For us, it’s really a blessing,” Chornokulskyi said.

His family is from Odesa, one of Ukraine’s larger cities. Since arriving in Vankleek Hill Chornokulskyi has learned what a garage sale is and enjoyed checking out Trash and Treasure.

The family left Ukraine by going to Moldova, and then Romania before traveling to Canada.

Bery Medika, his wife, Daria Zhuk, and their son Ryan are now living in Hawkesbury. Medika is originally from Angola in Africa but met his wife when he was studying finance in Kyiv. They left Ukraine on February 24 and managed to travel to Poland by train.

Medika said they are trying to adapt to a new life.

“It’s a new experience for us,” he said.

During the Together for Ukraine event at the Arbor Gallery, art by local artists and students from area French-language Catholic schools showing support for Ukraine was on display. 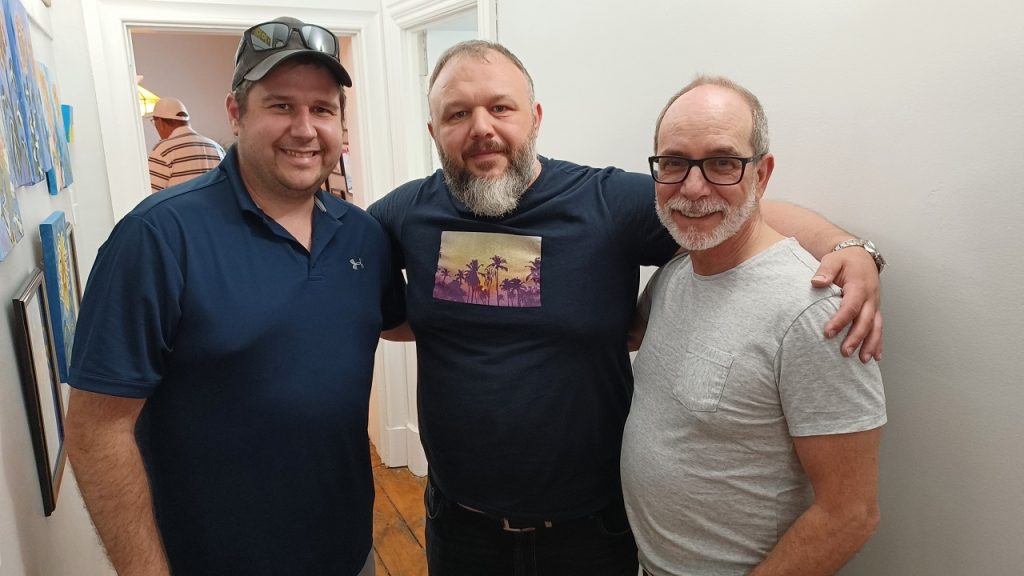 Andrii Chornokulskyi, middle, and his family have recently left Ukraine and have settled in Vankleek Hill with the help of the Vankleek Hill Baptist Church. At Chornokulskyi’s left are Daniel Lalonde, and at the right is Sylvain Grenier, both of the church congregation. Photo: James Morgan