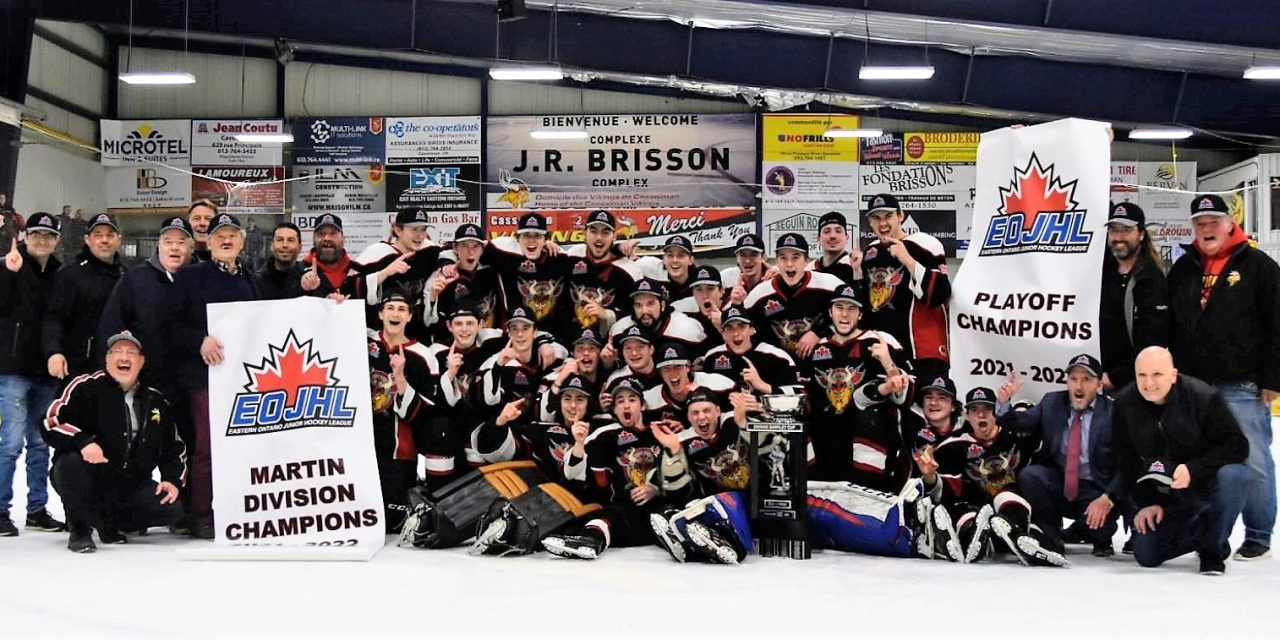 The Casselman Vikings celebrate after wrapping up the Barkley Cup at home on Thursday, April 28. Photo: Sylvain Lauwers

by Tyler Major-Mcnicol
Special to The Review

The trend of home-ice advantage meaning nothing finally changed in the Eastern Ontario Junior Hockey League (EOJHL) finals, as the Casselman Vikings took a 6-3 win over the Perth Blue Wings to wrap up the Barkley Cup at the J.R. Brisson Complex.

Coming out flying in front of their home crowd, the Vikings left little doubt early as to the outcome of this game, with Frédéric Gagnier scoring his first of the playoffs at 6:29 of the first and Nick Pozzebon putting Casselman up two goals at 14:38. Jacob Dyer then scored to give Casselman a 3-0 lead with just over a minute left in the first.

Casselman Vikings’ defenseman Vincent Bastien scored the Vikings’ fourth goal of the first frame with five seconds to go in the period, off a feed from his defensive partner Alexandre Charlebois. Bastien’s marker turned out to be the Barkley Cup winning goal.

The Casselman barrage continued to open the second, when forward Nicolas Chartrand fired home a feed from team captain Mathieu Talbot at 3:54, before suddenly the tide started to turn. The Perth Blue Wings’ battled back with three goals of their own, during a desperate effort to get back in the contest in the second half of the period. But fighting back to within two goals as the second frame closed was as close as the Blue Wings would get.

Vikings’ goaltender Zachari Racine stopped all four of the Blue Wings’ third-period attempts and 17 out of 20 of Perth shots overall. Forward Tyler Stewart sealed the deal at 13:43 of the third period, putting the Vikings up 6-3, assisted by forward Xavier Borga.

Pozzebon and Bastien earned themselves first and second star honours respectively, with a goal and assist each.