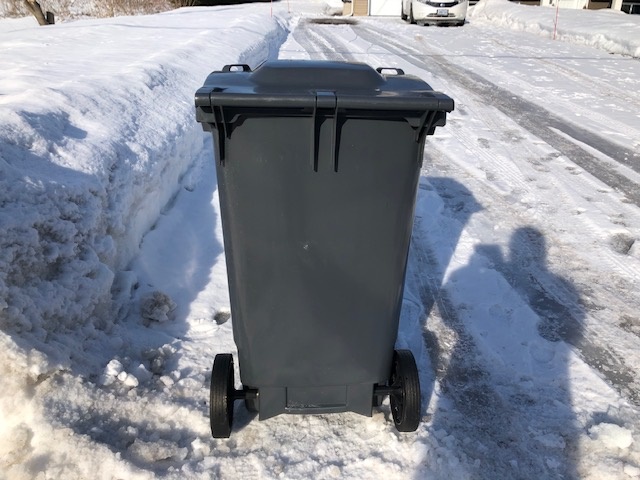 East Hawkesbury has issued new garbage bins to each resident. If residents already used bins for garbage collection, they may now only be used for recycling and the municipal logo must be affixed to the bin. Submitted photo

New garbage collection policies and procedures are now in effect for residents of East Hawkesbury.

Earlier in March, a new 240-litre bin was distributed to each residence. Only garbage placed in those bins will be picked up. The bin must be placed with the municipal logo facing the road at a distance of no more than 10 feet from the edge of the road surface.

If residents need an additional bin, they may obtain one from the township office at no immediate charge. However, residents who do obtain a second bin will be invoiced for having an extra unit.

The garbage collection rate in East Hawkesbury for 2022 is $170 per bin.

According to East Hawkesbury Chief Administrative Officer (CAO) Luc Lalonde, the new policy is designed to set an equal limit for every residence.

“The previous by-law was set with a limit of six garbage bags per week, which was way too high to meet provincial (waste reduction) goals,” Lalonde said.

The CAO explained that a 2020 audit of the township’s services recommended revisions to the waste collection policy, and that East Hawkesbury’s previous six-bag limit exceeded what is offered in neighbouring municipalities. The by-law changing garbage collection practices was approved by township council on October 12, 2021.

In Champlain Township, residents may leave one, 178 litre bin that is three-quarters full, or two containers of 77 litres or less, or two bags of 77 litres or less at the roadside for garbage collection. North Glengarry residents are limited to two 26 inches by 32.5-inch garbage bags per week for roadside garbage collection. Additional bags are permitted but a tag must be affixed to the bag at a cost of $3.00 per tag.

Lapensée was still using two gray garbage bins he had purchased before the new policy was adopted and crews did not collect his garbage for two weeks. Lalonde informed him that only the new bins the township has issued may be used for garbage also offered a sticker with the township logo that can be affixed to the old bins so they may be used for recycling collection.

According to Lalonde, every resident was informed of the garbage collection changes at the beginning of February through a newsletter delivered by Canada Post.

Lapensée indicated he was not aware of the changes to garbage collection procedures, and he and his neighbours speculated why his garbage was not collected for two weeks. Lapensée said he has had to contact the township before with questions about garbage collection.

“This wasn’t my first time dealing with these collection unknowns and usually ends up with my having to email the township and provide pictures so they can ‘educate’ me,” Lapensée said.