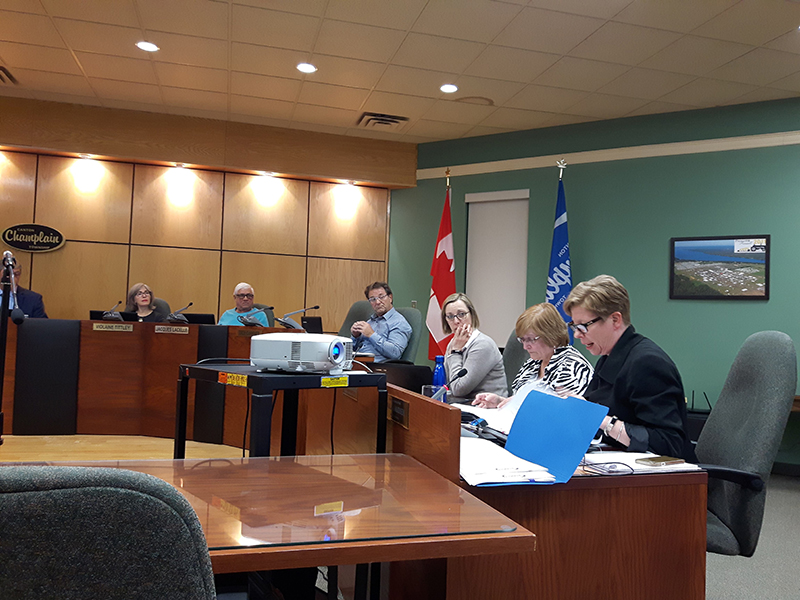 At right is Champlain Township CAO Paula Knudsen at a council meeting in 2018. Photo: Louise Sproule

Champlain Township is without a Chief Administrative Officer. CAO Paula Knudsen is no longer employed by the township, as of Tuesday afternoon, confirmed Mayor Normand Riopel on Friday, March 11.

Riopel said he could not comment other than to say that as of Tuesday afternoon, she was no longer an employee of of the township.

He said that the municipality is not currently recruiting but that a job description may be created in the future.

At its regular council meeting on March 10, an item not appearing in the agenda was item 12.5, the approval of a bylaw to repeal bylaw 2014-53, which had appointed CAO Paula Knudsen to the post of CAO and Deputy Clerk. Councillors Violaine Titley, Jacques Lacelle, Andre Roy, Gerard Miner and Michel Lalonde voted in favour of the repealment bylaw, while Councillors Troy Carkner and Peter Barton voted against it. No councillor requested a recorded vote, however. Councillor Sarah Bigelow was absent from the meeting.

In recent months, treasurer Kevin Tessier has been also in the role of Acting CAO while Knudsen was off on sick leave. His role is indicated as such on the municipality’s website.

A source has said that Knudsen, who had been on sick leave since November of last year, returned to work on Monday, March 7. Her employment with the township ended the following day.

When contacted by The Review, Knudsen declined to comment on the matter.

Likewise, several councillors contacted by The Review declined to comment.