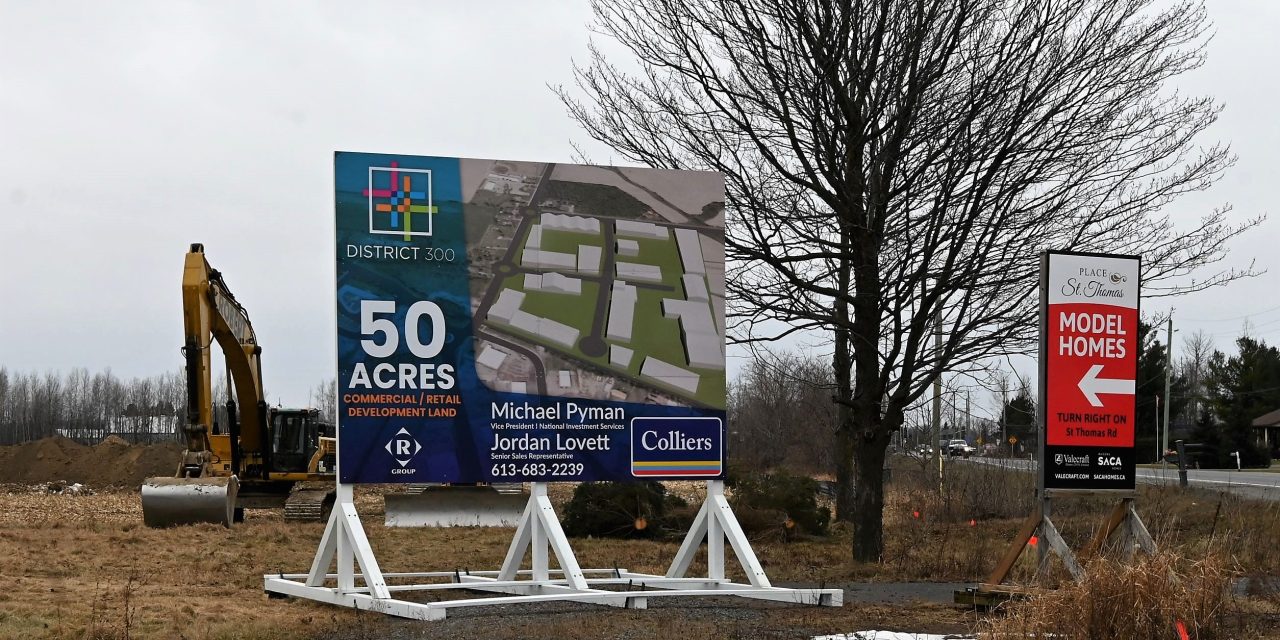 New construction in Russell Township. A Growth Management Study (GMS) that is part of the Official Plan review process was presented to UCPR council. The GMS update indicates most of the land use planning and development needs during the next 25 years will be in the UCPR’s western municipalities, and the majority of the growth will be in Russell Township and Clarence-Rockland. Photo: Garth Short

A new study projects the majority of the land needs for housing and industrial development in United Counties of Prescott and Russell (UCPR) during the next 25 years will be in its western municipalities, particularly Russell Township and Clarence-Rockland.

On February 23, an update on the Growth Management Study (GMS) that is part of the Official Plan review process was presented to UCPR council.

“There’s been a growth surge in the UCPR since about the time of the 2016 census,” said Stefan Krzeczunowicz of Hemson Consulting of Toronto, the firm responsible for the study.

He explained a double cohort of baby boomers and millennials alike are buying homes, and high home prices in Ottawa are pushing people away from city centres to places like Russell and Clarence-Rockland.

Due to their significant commuter relationship with Ottawa, two-thirds of the growth is expected to be in the western municipalities.  Despite the high growth in the western area, the total population of the UCPR in 2021 was 98,180, lower than the 99,000 projected in 2012.

Krzeczunowicz  is anticipating a mix of single detached, row, and apartment housing across the UCPR to serve both younger and older demographics. According to the GMS, 12,350 new residential dwellings are projected for the UCPR during the next 25 years, and most of those dwellings will be constructed in serviced settlement areas which are towns, villages, and subdivisions where water and sewer services will be provided.

Most job growth across the UCPR territory until 2046 will be in areas designated for Trade and Industry under the Official Plan. However, growth will not be uniform among all of those lands and is favoured towards the Highway 417 corridor in Russell Township. Out of the Trade and Industry employment growth projected in the GMS, 45 per cent of it is to be in Russell. The second highest amount, at 15.6 per cent is projected to be in Clarence-Rockland, 13.5 per cent of employment growth is projected for La Nation.

The Trade and Industry growth projections to 2046 are much lower in the eastern UCPR municipalities. Hawkesbury is projected to have 5.5 per cent, 4.4 per cent for East Hawkesbury, and 4.3 per cent in Champlain.  The is a 297-hectare supply of vacant land for employment use across the counties. However, there is a shortfall of available land to meet anticipated 2046 needs in two municipalities. Casselman, which is completely surrounded by La Nation, requires an additional 3.8 hectares, and Russell Township requires 105 additional hectares.

“It’s kind of depressing.” said East Hawkesbury Mayor Robert Kirby in reference to the growth forecast for the township. He asked Krzeczunowicz if the GMS considers lands not for sale for development.

Krzeczunowicz said land vacancy is determined based on “what’s on the ground and actually constructed,” and land is vacant if nothing is constructed on it according to the designated use for where it is situated.

“We’re 45 minutes from Montréal, we’re the first municipality in Prescott and Russell. Don’t you think there could be a potential?” asked Kirby.

Krzeczunowicz said there is potential for East Hawkesbury, but not growth trends like those expected in Russell Township.

La Nation Mayor François St-Amour challenged the suggestion in the GMS that most of the demand for future trade and industry land will be for serviced lots. He said that has not been the case in La Nation’s business park by Highway 417.

“I’d just like to see some opportunities for The Nation Municipality to have more growth,” said St-Amour.

He added La Nation is adjusting their trade and industry area because they are concerned about barriers to future development.

“I don’t think the report is telling you what can and cannot happen in your municipality,” said Clarence-Rockland Mayor Mario Zanth.

He wondered if it would be wise for Champlain to negotiate with neighbouring municipalities for water and sewage servicing so it could develop quickly, or if it should create its own system to service those lands. Riopel said in the early 2000’s, Champlain looked ahead and added Trade and Industry lands around its boundaries with Hawkesbury.

Mayor Paula Assaly of Hawkesbury said the eastern UCPR municipalities need to work together to attract development and growth.

“As far as I’m concerned, Hawkesbury, Hawkesbury East (sic), and Champlain, they need to get together and get their act together in order to prosper and take advantages of populations that are located more closely to Montréal,” said Assaly.

The Hawkesbury mayor suggested the eastern municipalities organize themselves “into a more regional area,” if not geographically, but at least to working together on servicing available land.

“I think we have to remember though, growth anywhere in the township is a benefit to all of our communities,” said Russell Township Mayor Pierre Leroux before the discussion concluded.