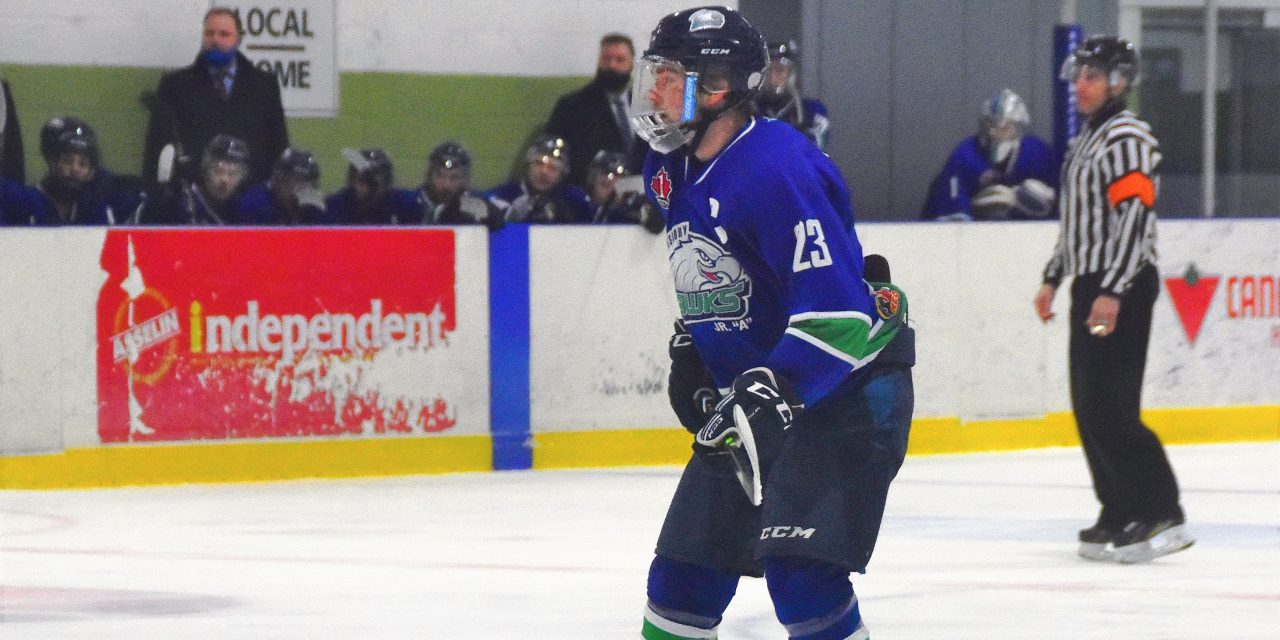 The Hawkesbury Hawks capped off a perfect week on Sunday (February 13), knocking off the Kemptville 73’s 4-1 on the road for the team’s third victory in four days. The win followed a 5-2 home victory 6-2 over the Nepean Raiders and a 6-2 win against the Cornwall Colts.

Kemptville jumped out to a 1-0 lead after one period, but Hawks forward Kerfalla Toure got that back in the second period, as he scored his 16th goal of the season. Hawkesbury then pulled away early in the third period, as Thomas Cusson and Mark Cooper scored just over a minute apart to stake the Hawks to a 3-1 lead. Ryan Murphy added a power play goal just after the period’s midway point to seal the 4-1 victory. Matthew Tovel stopped 26 or 27 shots in net to earn the win.

On Friday, February 11, Hawkesbury topped the Nepean Raiders 5-2 before the team’s home crowd at the Robert Hartley Sports Complex. Cooper and Cusson each had a goal and an assist in the victory, while Toure, Tyler Samodral and Bradley Horner also scored. Hawks netminder Tovell stopped 20 of 22 shots on goal to earn the win, while Hawkesbury fired 42 shots at the Nepean net.

Hawkesbury started off the three-game winning streak on Thursday, February 10, with a total domination of the Cornwall Colts in a 6-2 victory that was not as close as the score would indicate. Hawkesbury outshot the Colts 46-18 over three periods and Cusson scored two goals, while Josh Spratt, William Gendron, Jeremy Tremblay and Samodral each scored once in the win. Tovell again took the win in net.

With the three wins on the week, Hawkesbury solidified its hold on second place in the Central Canada Hockey League’s (CCHL) Yzerman Division.

The Hawks were scheduled to face Renfrew in a rare home game on Tuesday, February 15 (score unavailable at press time) before this Friday’s (February 18) game against the Navan Grads at the Robert Hartley Sports Complex. Game time is 7:30 p.m.

The Hawks will be on the road against the league-leading Ottawa Junior Senators on Saturday, February 19, and will travel to Kemptville for a rematch against the 73’s on Monday, February 21.