Chaumont scores five goals, as Cougars head into playoffs on a roll 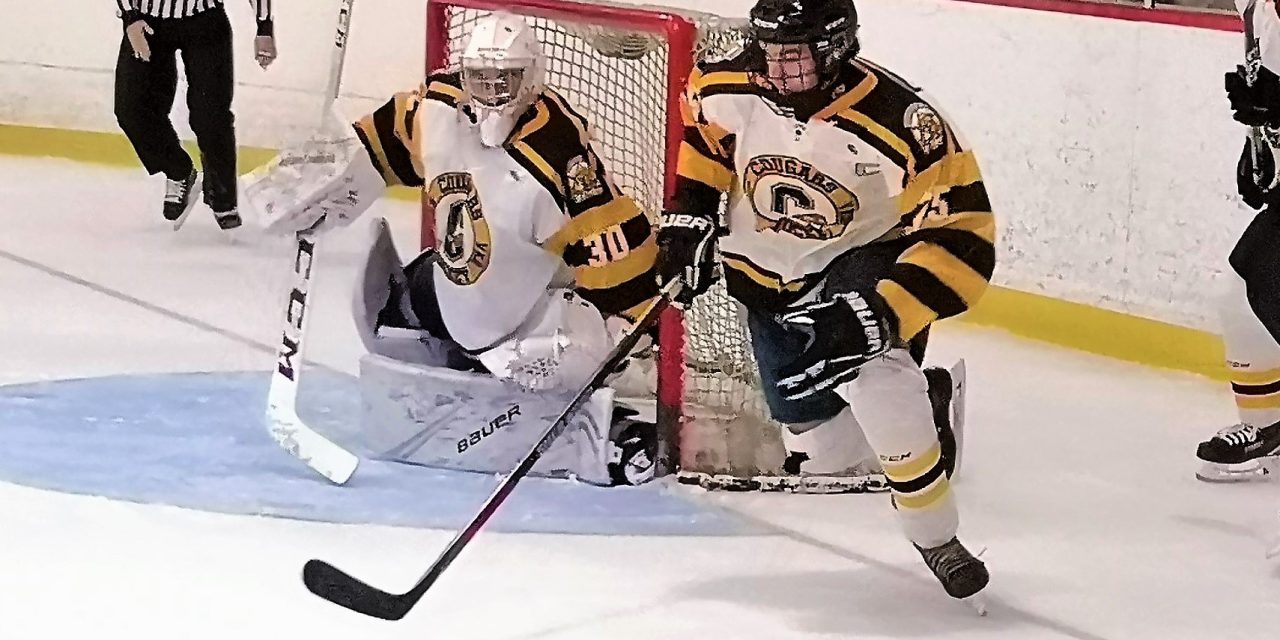 The Vankleek Hill Cougars and forward Justin Chaumont are heading into the National Capital Junior Hockey League playoffs with some momentum, after a confidence-building end to the team’s regular season.

The Cougars’ captain had a milestone night on Sunday, February 13, scoring five goals as Vankleek Hill rolled over North Dundas, beating the Rockets 8-5 in Chesterville. Frederick Duroucher-Bourdon got the win in goal, as the Vankleek Hill squad gained some revenge for an 8-3 loss to North Dundas on February 5 that dampened the Cougars’ pre-game 30th anniversary celebrations.

“They spoiled (our celebration) pretty badly so we tried to ruin their night too,” said Cougars Head Coach Franky Dopelhamer.

Brenden Easterbrook, Alexander Perry and newly-signed Alexandre Saül added singles markers, while Joshua Renaud had four assists and Simon Levac notched three helpers. The Cougars took control of the game from the start, leading 3-2 after the first period and and 6-4 after two.

With his five-goal night, Chamont wrapped up the NCJHL’s scoring title, with 22 goals and 23 assists for a total of 45 points in just 21 games played.

The road win was also a bounce-back victory for the Cougars, who fell to the St-Isidore Eagles 5-1 at the Vankleek Hill Arena on Wednesday, February 9.

“We beat them in their rink and they were out for revenge,” Dopelhamer said, noting the Cougars were missing several players for the rare mid-week contest and continue to work on consistent play. “We’re still young and we’re still learning.”

The Cougars finished the National Capital Junior Hockey League regular season in fourth place and will face the fifth place Gatineau-Hull Volant in the first round of the playoffs. Vankleek Hill will travel to Gatineau this Friday, February 18 for the opening game of the best-of-five series. On Saturday, February 19, the Cougars will be at home to face the Volant in the second game of the series, which will start at the Vankleek Hill Arena at 7:20 p.m.