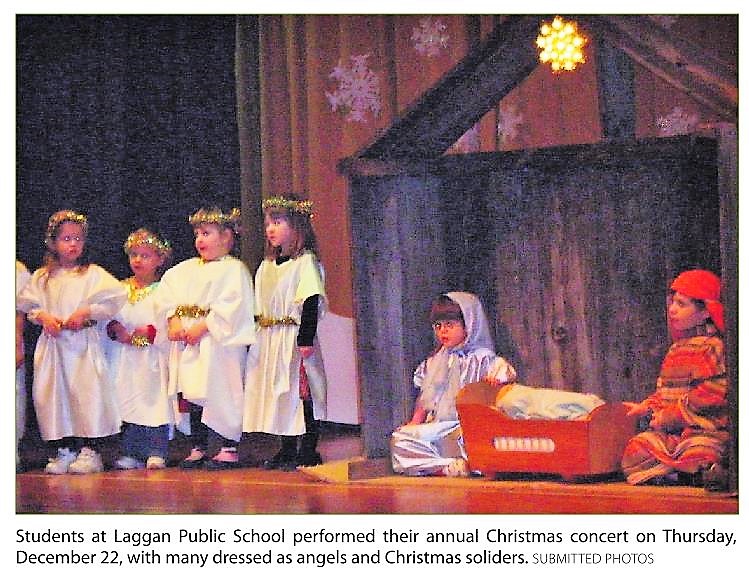 Students at Laggan Public School perform in the school’s 2011 Christmas concert. Click on the picture for the full photo and caption as it appeared in the December 28, 2011, edition of The Review. REVIEW ARCHIVE PHOTO

10 Years ago
Thieves loot Hawkesbury Food Bank
The Review, December 28, 2011 – HAWKESBURY – It certainly wasn’t a very merry Christmas for the Hawkesbury Central Food Bank. After making several pleas for assistance, the financially-strapped food bank received another blow over the holiday weekend, when thieves broke into the food bank and made off with food and other valuables. The suspects made off with 12 cases of sausages, two computers and approximately $100 in cash.

25 Years Ago
Two more wins for VCI basketball senior boys
The Review, December 25, 1996 – VANKLEEK HILL – Home court fans had a lot to cheer about last Thursday, as the Vankleek Hill Collegiate Institute senior boys basketball team won both of their games in the Prescott-Russell League. The Warriors disposed of Casselman 73-42, with Eric Freeman scoring 15 points, Jamie Cross with 12, and Paul Biddleston with 9. In the second matchup, VCI avenged an earlier defeat to St. Francis Xavier, edging the visitors 43-37. Corey O’Neill scored 13 points, while Jamie MacLauren added 10.

50 Years Ago
Skating rink problem solved
The Review, December 22, 1971 – VANKLEEK HILL – The need is solved. With Christmas holidays rapidly approaching, the Community Centre Board is setting up an outdoor skating rink beside the condemned Community Centre building. Since last February, when the building was closed as unsafe for public use, the lack of a rink has made hockey difficult here on the Hill, and placed our local players under a severe handicap.

75 Years Ago
Dalkeith farm takes top prize at Chicago Grain Show
The Review, December 26, 1946 – DALKEITH – McMillan Bros., of Dalkeith, carried off the top prize at the Chicago International Grain Show. The win at Chicago was a repeat victory for Myles and John McMillan of McCrimmon Road, who were Timothy Kings at Chicago in 1941, the last year the big grain and hay show was held before the U.S. went to war.

100 Years Ago
No reason to starve in Vankleek Hill
The Review, December 30, 1921 – VANKLEEK HILL – The letter signed by a “Returned Man” has caused quite a stir in certain quarters and considerable adverse criticism has been the lot of the Editor of The Review. Make no mistake about us not being able to bear criticism, because in the past 25 years of newspaper work we have thrived on it, and as long as we can toddle, our columns are open to all those in adverse circumstances. At any rate there’s no reason why anyone should starve in Vankleek Hill if work is needed. Mr. Wm. Newton has work for any returned man who is in need.

125 Years Ago
Crystal Rink opens for skating
The Review, December, 1896 – VANKLEEK HILL – The managers of the Crystal Rink announce that the rink will be open for skating on Saturday evening unless there occurs a very decided thaw act in the meantime. Great pains have been taken in making a good bottom and excellent ice is assured if the present cold weather holds.