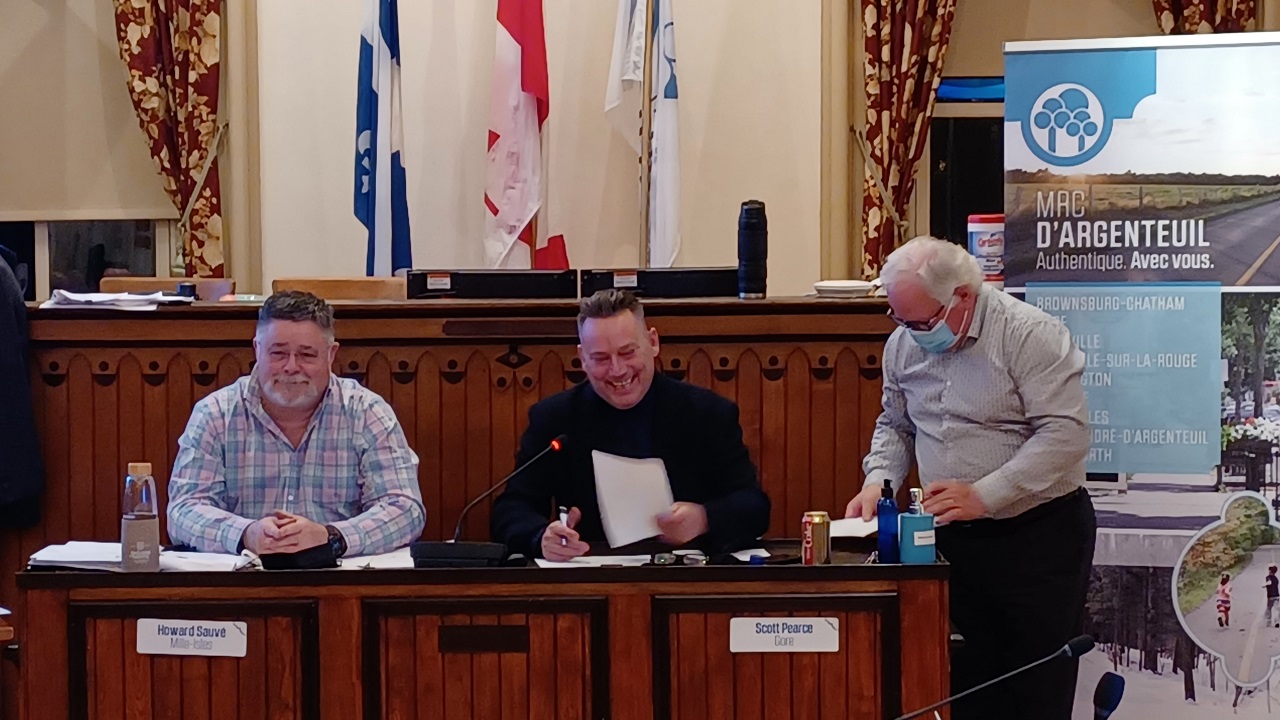 Scott Pearce will continue as Prefect of the Municipalité régionale du comté (MRC) d’Argenteuil for two more years. Pearce, who was also re-elected as mayor of Gore on November 7, and has served as prefect since 2019, was acclaimed as head of the Argenteuil regional government on November 24. Mille Isles Mayor Howard Sauvé was acclaimed as Deputy Prefect.

After his selection by the other eight Argenteuil mayors was confirmed, Pearce emphasized his commitment to the region and its communities.

“I adore Argenteuil, I adore Gore.”

Pearce said it has already been a pleasure working together with MRC d’Argenteuil council and staff, and he knows there are still difficult files to address.

“We will work to find solutions.”

Pearce said those difficult files include continuing tension with the Québec government over Orientation 10, a provincial planning policy introduced in 2017 which imposes additional land use restrictions on regional and municipal governments on the periphery of Montréal. Pearce would also like the MRC d’Argenteuil to advance its efforts to protect the mental health of citizens, which means more resources and funding are required.

Fibre Argenteuil, the MRC’s own high-speed internet provider, is a success story Pearce is pleased to highlight. Rather than give funding it received from the Québec and federal governments for rural internet improvements to existing companies, the MRC established Fibre Argenteuil to install its own infrastructure and provide services to customers.

Revenue from Fibre Argenteuil will be used to pay for its infrastructure, maintenance, and will eventually provide revenue to the regional government.

“I think that’s going to bear fruit for the population for 40 to 50 years,” said Pearce.

Due to Pearce’s selection as prefect, Gore Township Councillor and Deputy Mayor Alain Giroux will officially represent that municipality on MRC d’Argenteuil Council. MRC Director-General Marc Carrière explained that by law, the prefect does not also serve as a municipal mayor at the MRC level.

Sauvé, who was acclaimed to another term as Mayor of Mille Isles on November 7, succeeds former Lachute Mayor Carl Péloquin as deputy prefect. Sauvé said the MRC d’Argenteuil council will work hard and honestly to get things done.

“We are going to progress on files with transparency.”

At the November 24 meeting, MRC d’Argenteuil council approved a motion of appreciation to Péloquin for his service to the regional government, and to former St-André-d’Argenteuil Mayor Marc-Olivier Labelle, who was defeated in the November 7 election by Stephen Matthews.