L’Orignal author Colin Affleck documents the history of the luxurious Grand Hotel in his new book ‘Caledonia Spring – The Rise and Fall of One of Canada’s Grandest Hotels’. PHOTO: REID MASSON

Author Colin Affleck is the perfect target audience for his new book ‘Caledonia Spring – The Rise and Fall of One of Canada’s Grandest Hotels’.

What started as curious interest in crumbling structures and remnants of days gone by that he discovered while out walking, turned into an obsession for the retired military analyst, who first learned of the history of one of Canada’s finest hotels a decade ago.

“We were looking for a place to walk our dog and the Prescott-Russell Recreational Trail was perfect,” says the L’Orignal resident, of his initial journeys down the trail in 2012. “We went to the closest entry point, which turned out to be some place named Caledonia Springs – about which I knew absolutely nothing.”

While out on his walks, Affleck began to spot objects which seemed out of place in the countryside.

“I paid no particular attention to it at first, but then I began to notice things; a mound of dirt, a foundation,” recalls Affleck, who moved with his wife from Ottawa to L’Orignal in 2009. “I began to get curious.”

“It became a hobby and an obsession, chasing down stray facts about Caledonia Springs,” the author laughs. “It was a hobby that took over my life.”

Affleck’s interest in Caledonia Springs is not uncommon to anyone who first learns that the tiny, unincorporated community in the Township of Nation was once a thriving tourist destination, to which visitors flocked from all over the world. At its peak during the late 1800s and early 1900s, Caledonia Springs contained multiple businesses and hotels which catered to wealthy visitors, with the finest of accommodations being the massive and luxurious Grand Hotel. 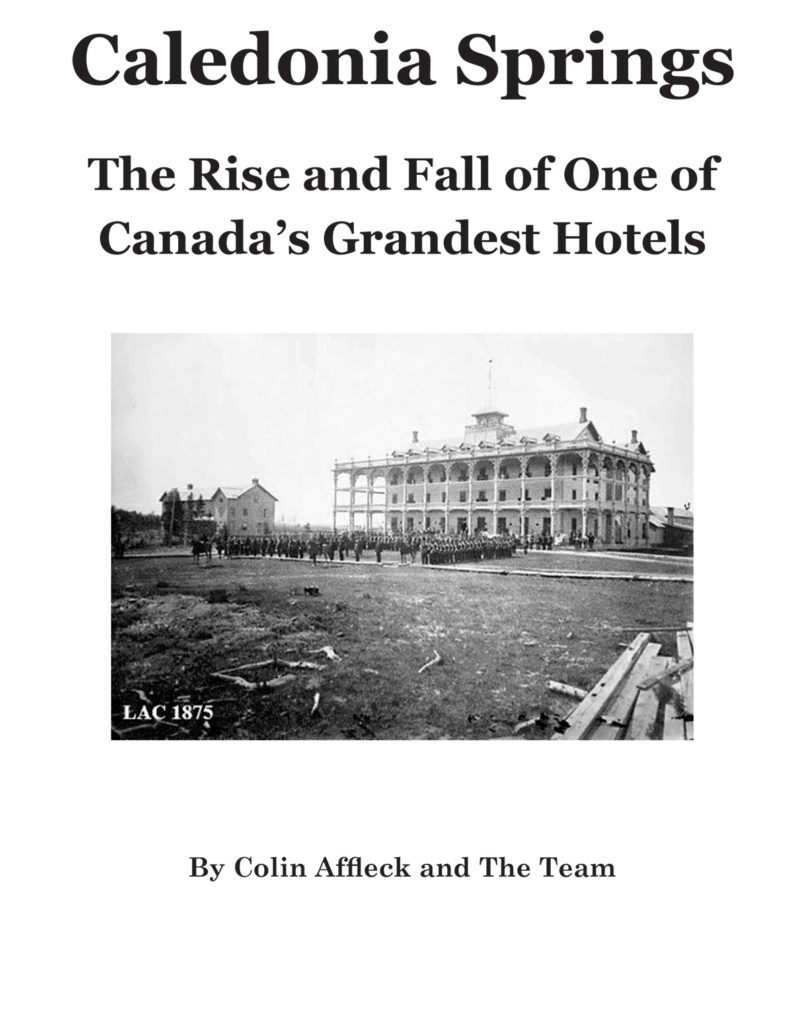 The author takes a look at the changes in ownership, expansions, renovations and the growth of the community and focuses on actual processes, like the water-bottling facilities and how they might have worked. It is a journey into history from the perspective of the amateur history enthusiast, who pieced together his findings along with many photographs, clippings and images.

From its obscure beginnings more than 200 years ago, through the ups and downs of growth, disastrous fires, repeated rebuilding, and all amidst a changing world, the book explores and considers the decisions and events which propelled an almost anonymous spot on Canada’s map to national and international prominence – only to end in obscurity.

The complete history of the rise and fall of Caledonia Springs from 1805 to the present is outlined in Affleck’s work, which is broken into several chapters. The author includes information on the village’s raw beginnings, growth in the early 1800s and the Golden Age of Caledonia Springs and the Grand Hotel from 1875-1904. He details the downfall of the hotel after it was purchased by Canadian Pacific Railways (CPR) in 1905, which led to its closing in 1915. The village’s subsequent slow fade into history is also documented.

Affleck did most of his research online, also visiting museums and speaking to local residents with some knowledge of the history of Caledonia Springs. He provides a list of credits at the end of his book, but the beauty of ‘Caledonia Springs – The Rise and Fall of One of Canada’s Grandest Hotels’ is that readers do not have to do the research themselves.

“I hate for information to disappear,” says the author, of the decision to compile his findings into a book. “I put it all together and even if nobody reads it, it’s out there.”

Published in June 2021, the first printing of ‘Caledonia Springs – The Rise and Fall of One of Canada’s Grandest Hotels’ quickly sold out. A second printing is now available for purchase for $35 through The Review Gift Shop, and in person at The Review offices in Vankleek Hill.

While his original interest in the history of Caledonia Springs was geared towards the structures and technology, as he continued his research, Affleck found himself taken in by the stories of the people who visited the hotel, and of those who lived there. He also marvels at the belief in the magical healing properties of the mineral water baths, and of the sales of bottled water for consumption.

“The thing that surprised me was how interested I became in the people who went there,” the author says. “They were people just like you and me, with all the same problems, but without any of our resources, our technology and our medicines.”

“I developed a real empathy for those people. They were trying their best to deal with stuff that they had no idea about.”

As for the technology used to move the water from the springs to the hotel and large bottling plant on the site?

“I’m still trying to figure that out.” says Affleck, who believes there was a large network of underground pipelines to transport the water to the hotel and bottling plant.

“I know for a fact I did not find everything,” he says, of his search for history on Caledonia Springs. “There is a ton more information out there and I’m sure there are probably people living around here that I haven’t found.”

Affleck would like residents of the region with any knowledge on the history of Caledonia Springs to contact him. He can be reached via email at [email protected] .

Today, some of the structures and remnants of the Grand Hotel can still be found, although most are on private land and access to visitors is not allowed. 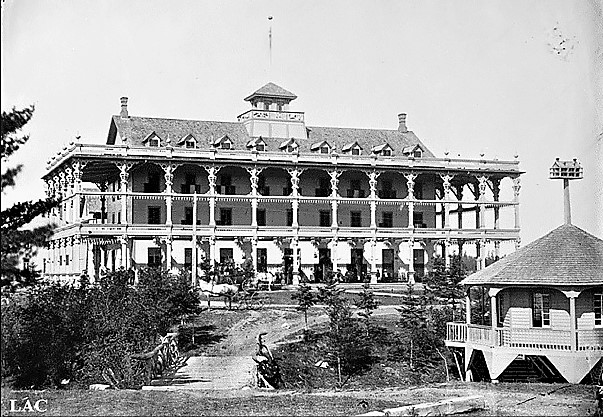 At its peak during the late 1800s and early 1900s, Caledonia Springs contained multiple businesses and hotels which catered to wealthy visitors, with the finest of accommodations being the massive and luxurious Grand Hotel.